Jill Stein Is a Front for Hillary


RUSH: Now, about this recount. Some stuff to add to this today, but one thing I want to mention before moving on here to something else just to get this out there. I have long suspected that Jill Stein’s not actually responsible for this recount, that she is a stand-in, that she is the public face of this. I actually think this is all Hillary Clinton. I think this recount that everybody thinks is Jill Stein’s and the Green Party’s is all Hillary Clinton. Now, there’s a story here from a website called LawNewz, N-e-w-z, and it is this:

“The Republican Party of Wisconsin filed a complaint with the Federal Elections Commission on Wednesday that alleges Jill Stein is allowing her campaign to be used as a front for Hillary Clinton’s campaign in the recount effort. Stein has denied those allegations.” Now, Stein’s denying all of that. “This was all set in motion .. with Clinton campaign’s attorney, Marc Elias, writing a lengthy blog post that explained how the Clinton campaign received hundreds of calls to ‘investigate claims that the election results were hacked…'”

She doesn’t want to leave politics, folks. You heard the buzz the other day that part of this recount effort is keeping Hillary’s options for 2020 open. She doesn’t have any options in 2020. She’s a two-time loser now, other than her Senate win. She’s a two-time loser. This is just to keep the money spigot on. This is just to keep donors coming, ’cause there’s another story today about how donors to the Clinton Foundation are getting testy. They realize they basically set their own money on fire. That $500-some-odd million donated to Hillary on the pretext she was gonna be president is now worthless.

The people that donated that money have no chance of having it pay off for them, and another story today is about how they are ticked off about it. The Clintons do not want to have to give the money back. They want to keep the money coming in. Jill Stein, I’m convinced, is doing this on the behalf of Hillary, who I don’t think can let go. I don’t think… I really don’t. I think this hectoring of the electors — the intimidating of the electors, the emails, the phone calls, the attempt to get electors to change votes. You cannot convince me the Clintons are not the primary movers and shakers of this.

It’s not Jill Stein, and this is not a bunch of ragtag Occupy Wall Street protesters. This is the Clintons. They’re insulated. They got some layers between themselves and this. But they are doing this. I guarantee they thought they had this in the bag. Even up ’til nine o’clock on election night they thought — Hillary thought, Bill thought — they were gonna win. I mean, they’re human beings. This has to have been devastating.

And we know how the Clinton machine has operated in the past. We know how the Democrat machine has operated in the past. This is the Clintons. This not Jill Stein. And I have a pair of audio sound bites that may help you to accept that. Tucker Carlson again last night on his show on Fox had a guy by the name of David Cobb, who was Jill Stein’s campaign manager, and he was totally, totally just floundering away trying to answer questions.

You will hear coming up right after this. Don’t go away.

RUSH: You can’t blame Jill Stein for not going away in one sense. I mean, they gave Bernie Sanders a lake house to go away. And she’s got nothing. And so now she’s out there as the face of the Hillary campaign, the Hillary recount. She’s gonna get something out of this before she goes away.

So last night Tucker Carlson is talking to David Cobb, Jill Stein’s campaign manager, about what they’re doing, why they’re doing it, what the hell is going on. There’s no evidence any fraud happened, so what are you doing? He said: “Three weeks after the presidential election and it is still not over. Recounts are about to commence … Michigan, Wisconsin and Pennsylvania. Okay, so what are the problems out there, Mr. Cobb?” 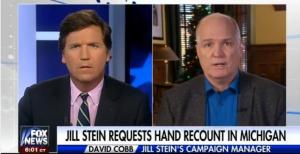 RUSH: Did you hear that?

COBB: — voting systems that cannot be trusted. What we see are the use of technology that is highly problematic, that had proven to be hacked by security experts. So all we’re asking for is a recount in order to —

COBB: — have confidence in the integrity of the election results.

RUSH: So the integrity the election — did you hear what he said? He said, “Well, the polls don’t show what the actual count was. I mean, we saw results that the polling data shows were not true.” They’re back to doing the same trick they tried in 2004 where the exit polls showed that Kerry had won so the problem became real poll, the real votes.

So Carlson then says, “Look, your description of the justification, with respect, doesn’t really match that of your candidate, Jill Stein. She was on The View today. She said, I’m quoting, ‘The machines are really tamper-friendly. They’re easy to hack.'”

COBB: Look, the machines are in fact connected to the internet for certain periods of time. That’s number one. Number two, those machines, especially the DRE, the so-called black box voting machines, are using proprietary software. And, most importantly, there is no guaranteed paper trail that we can check. So at the end of the day, Tucker, what we’re saying is we would like to actually investigate the concerns that thousands, hundreds of thousands, millions of Americans have. We do not have confidence in the integrity of the results. Ronald Reagan himself famously said, “Trust but verify.” That’s all we’re asking for.

RUSH: He went on to say that this recount was even about the integrity of future elections and the integrity of past elections and I was watching this, and at one point I found a way to explain to you what this guy’s doing. What he’s really saying is, last week it rained on Monday, and last week it rained on Wednesday, but it didn’t rain on Tuesday, and we need to investigate why. That is essentially the nonsense that’s going on here.

RUSH: Moses Lake, Washington. This is Elliott. Great to have you, sir. Welcome to the program.

Let me go back to election night this year. How many of you stayed up for the duration and remember that there was about an hour-and-a-half period in there from like — I’m guessing on the time, something like midnight to 1:30 Eastern where there wasn’t one result, wasn’t one new tabulation in any race, not just the presidential race. There was a 90-minute period where it seemed like all counting had stopped because there weren’t any updates on vote tallies. Do you remember?

An hour went by and the chatting heads are sitting there talking and doing their analysis, and finally after 45 minutes, maybe an hour, I said, “You know what, they haven’t updated anything.” And that’s when I noticed it. It went on for 90 minutes, roughly 90 minutes that there wasn’t one update, not just the presidential tally, but governor races, Senate races, nothing. And about a week-and-a-half later I found myself in the home of a very experienced political hand, and the conversation turned to this event.

And I said, “You know what? You’re right. There was an hour-and-a-half period where they weren’t reporting.”

He said, “Let me tell you what was going on. The networks got together.”

“Fox, too. They all got together and they ceased, because that’s when they were doing everything they could to find some votes for Hillary.” This is what this guy told me. I’d love to tell you who it was. It would add credibility to the story but I don’t have permission to. They were looking for votes. They were shocked. Everybody stunned. You were watching it. You know, they couldn’t believe what was happening. If you were watching all night at nine o’clock they were still thinking Hillary was it.

At Fox I remember when Chris Wallace was the first at about 9:30 to look at the tote board, “You know what, Trump could win this.” And they all went, “Aw, come on, what are you smoking? Oh, man what are you saying?” And then it began. And then another Foxie, “Yeah, you know what, this is looking like –” And it was happening on all the networks. Then around midnight, nothing for an hour-and-a-half. “Hillary needs to find a path to victory.” That was a phrase that was being used, what path does she have. They were looking for one. Now, when I say “they,” it’s a combination of people that report, people — the states were still counting. It’s not the states. They were counting, but they weren’t reporting.


All these websites, no change, hour-and-a-half. The counting was going on, but they weren’t reporting anything. The point here is, I agree with Elliott profoundly. I don’t think people have taken this assault on the electors seriously enough. Even if it doesn’t amount to a change, they know it doesn’t matter. There are many reasons why they’re doing this, to delegitimize Trump’s win, to delegitimize his presidency, to delegitimize the Electoral College, to use what happens here, whatever they can find here as an excuse to get rid of it.

The Democrats are gonna use whatever they can to get rid of whatever they think explains their defeat. If it’s the Electoral College, if it’s Trump, whatever it is. And this recount gives them opportunities to discredit the entire process. And that’s what they’re hoping to do, whether they can reverse it or not. So I agree with him. This is not something to be laughed off, “Look at how silly these people are. They can’t change the outcome.” Maybe not, but that also may not be their ultimate objective, either.

RUSH: Now, look, folks, and don’t doubt me. No matter how you slice it, the Democrat Party waging war, the left waging war on our electoral system, which until November 9th was the worst thing anybody could do. Remember what they said about Trump when he said he wouldn’t accept the results until we got there and knew what he was dealing with, And remember Hillary and the media talking about how unconscionable, how that was violating the sanctity of our electoral system, and now look at who’s doing it. Now look at who’s trying to blow it up.

Before November 9th it was a crime against democracy to even question the results, but now that they have lost, now it’s a matter of virtue to get to the bottom of what happened because the polls all show that Hillary’s gonna win. I’m telling you these people are snakes, and the sooner everybody realizes it and instinctively recognizes that liberalism is what it is, we’re never gonna be safe ’cause they never go away and they never stop deceiving and lying or doing whatever they can do.