RUSH: I saw earlier today a discussion about Obama.  This is something I want to continue to ram home.  And grab… I told Mike the sound bites would start with number one. Actually, grab sound bite number 19, Howie Kurtz. Predictably, the people at Fox News have been having a lot of fun with Obama in Rolling Stone blaming Fox News for the fact that Democrats lost the election. So here’s Obama. He’s complaining about… (laughing) He’s complaining about the fake news on Fox News in an interview at Rolling Stone, which is gonna probably lose $7.5 million in a civil suit for making up a story about rape that never happened at the University of Virginia.

So Obama is sitting for an interview by a bunch of fake news purveyors at Rolling Stone, and he’s praising them, and he’s asked, “What happened in the election, Mr. President? What happened? How come Trump won? This was a just a devastating loss to you and the Democrats. How did it happen?” That’s when Obama blamed Fox News. He said (summarized), “Well, at every bar in America people have Fox News on, and Fox News engages in fake news and so forth, and the idiots that watch Fox News believed it.”

Now, what Obama is doing there — and I don’t blame the people at Fox News for talking about it. But what Obama’s really doing there is trying to make sure that nobody blames him for what happened. And he’s the reason the Democrats lost. This is something that I think everybody needs… It’s gonna take a daily reminder, because the news narratives every day are not gonna focus on Obama. I mean, the Drive-Bys are gonna do everything they can to protect Obama, but Fox News is not why the Democrats lost, and this program is not why the Democrats lost.

The Democrats lost on substance. The Democrats lost… There were a bunch of factors. Donald Trump was a very engaging candidate. He had a deep connection with gazillions of people. He had a specific agenda that he was going to enact and he’s already enacting it. Donald Trump’s had maybe the best 36 hours of any president-elect I’ve seen in my life lifetime during his transition period. The Carrier thing. He’s just winning everything. He’s cabinet’s being put together. He’s winning everything that he’s doing right now.

And the contrast with the Democrats is profound, and here’s Obama, who is… Can you imagine how he feels? His ego will probably not allow him to feel as a normal person would feel, but if his ego and his narcissism were not such he would feel really small and irrelevant right now and he would be questioning what his whole value the last eight years was for because it’s all coming undone. It’s all in the process already of being unraveled. But more than that, Barack Obama is the reason his party lost. I’m not trying to take Trump out of the equation.

Trump is definitely part of it. But Obama’s agenda — policy agenda, substantive agenda — was repudiated. It was sent packing. This was an election that was ideological. People are trying to tell you it was a change election or it was anything but an issues election. “Eh, people are just tired. You know, they wanted a new face. They wanted a change of direction.” No, no, no, no. This was a direct repudiation, because it’s a continuation. In 2008, Obama wins. But in 2010 when the midterms come, the first wave of massive Democrat defeats occurs. The next wave was the 2014 midterms, and then this election, last November.

She’s asking Kurtz, who is their media analyst at Fox. She says, “Howie, if Fox had that much power, then he wouldn’t have been reelected in 2012, right? The logic doesn’t really flow here. If you can’t battle Fox News, then how did Obama win twice?” 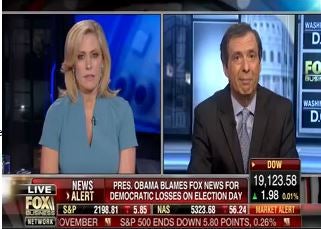 KURTZ: Now, no matter how popular Fox is, it’s a cable news network. That can’t possibly compete with the president’s power to project his voice. The president acts like everybody at Fox is just against him. He doesn’t make a distinction, most of the time, between the news programming and the opinion programming. A lot of the commentators have been rough on Mr. Obama. But he puts it all together like, “Well, you know, if only there wasn’t all this noise,” sometimes he mentions talk radio, Rush Limbaugh, Fox, “I’d be getting more of my agenda through.”

RUSH: Right. He knows, folks. When he goes to fundraisers and complains about the state of the Democrat Party, he mentions me, because I, for some reason — I can’t figure out why — have become an automatic tool. I’m perhaps the best fundraiser for the Democrats. If you want to separate Democrats from their money, tell them (chuckles) that I’m on the march. Tell them that I’m responsible something, and they will start writing checks for money that they don’t even have. When Obama goes public, he blames it on Fox News and sometimes me.

He succeeds in a way by blaming Fox; then everybody at Fox starts defending Fox and starts talking about things and misses the point, which is why I’m making a point of it now. And the Democrats have not got the message. They nominated Pelosi to lead the Democrats in the House. They’ve got Schumer, a San Francisco/New York liberal in the Senate, and the things that they’re doing and saying do not reflect that they understand what happened to them yet at all.