RUSH:  Justin was talking about various things he heard Trump say, and he focused on Trump talking about the greatness of America and no longer the fact that globalism was the big thing for the United States.  I wanted… We have the sound bites from Trump’s speech last night, and I just wanted to grab that one and play it for you since Justin pretty aptly described it.

Here’s how Trump described that…

TRUMP:  For too long Washington has tried to put us in boxes.  They separate us by race, by age, by income, by geography, by place of birth.  We spend too much time focusing on what divides us.  Now is the time to embrace the one thing that truly unites us.  You know what that is?  America!

TRUMP: Because when America is unified, nothing is beyond our reach.  There is no global anthem, no global currency, no certificate of global citizenship.  We pledge allegiance to one flag, and that flag is the American flag.

RUSH:  And that’s why, one of the many reasons the left is wetting the bed today, and one of the many reasons they were wetting the bed last night.  That bite pretty much encompasses the rally last night, the thank-you tour.  We’ve got sound bites, highlights-of-many of the things Trump said. But that’s pretty much it.  Now, this is a great opportunity for me to say something that I have long said about Trump and that is that he’s not ideological.

Conservatism, liberalism, those are not things that help Trump sift through people and information.  He’s just not. I am. I am totally ideological.  I spot liberalism, and when I do, I automatically disagree with it.  Experience guided by intelligence.  He’s not.  But he often comes to the same conclusions I do about things, even though he doesn’t get there the same way, and this bite offers a great example and illustration of how.  “For too long Washington has tried to put us in boxes,” okay?

So all of these other groups get added together to try to outnumber white Christians or white males or what have you. But the real objective of this is to make victims out of all these other people.  When you make victims out of them, you immediately turn them to dependency.  When you begin to become their champion in overcoming whatever it is that’s against them — and, by the way, what’s against them is America! In the land of the left America is the biggest obstacle, and they make victims — the left does, the Democrat Party makes victims — out of all these people.

They immediately, therefore, turn them into dependent people dependent on the Democrats, dependent on government, and they also destroy, in my mind, an element of their humanity, because they tell ’em, “There’s so many obstacles in your way, you can’t possibly overcome them.  You can’t become great.  It’s not possible because of the bigoted and prejudiced way this country is structured.”  They tell people this, and people believe it.  People believe they have no hope, they have no chance unless government or the Democrats are out there punishing this phantom enemy.

There are different degrees of both, but we see people yearning to be free.  We want as much freedom and liberty for people as possible.  Trump sees that, but he doesn’t associate liberalism or conservatism with this.  He’s simply look at the state of the country today, and he’s seeing all of these divisions. And he listens to TV, watches TV, and he’s made the proper conclusion. He’s listened to people separate us by race, by age, by income, by geography, place of birth, and he knows it firsthand now because of having run a campaign. 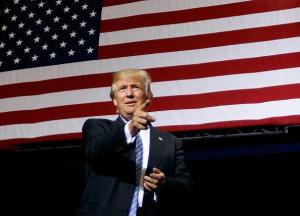 The left cannot, in its heart, desire unity.  Unity would kill them off.  Unity would end the need for liberalism.  Trump comes along, and what’s the one thing we all have in common? America.  We’re all Americans.  In his world that’s always been the case.  World War II, Vietnam War. We’re all Americans.  His instincts are right on the money, “and when America’s unified, nothing’s beyond our reach.”  That’s history.  That’s historically true.

When we are unified, there’s no stopping us.  Every time we’ve unified and come together on whatever the objective is, we triumph.  History is replete with examples, and he knows it.  He’s also very correct, and this is… I’m gonna attach originality and uniqueness to Trump here, because I’ve not heard anybody else say this, not the way he did it in the context.  I’ve heard people make these independent observations, but not as a premised point.  “There is no global anthem. There is no global currency.  There is no certificate of global citizenship.”

He’s exactly right.  There isn’t.  But there are people who want all three of those.  They want a global anthem; they want a global currency; and they want global citizenship.  And to accomplish all of that, they have to eliminate nation states, and they have to eliminate the power and the defining characteristics of that power, the United States.  And Trump understands full well what’s going on, identifies that just flawlessly.  There isn’t a reasonable person in America who would not be inspired by that.  “Are you saying people that disagree with Trump are unreasonable?”  Damn right I am.  There’s nothing unreasonable about this.

But to the people who voted, the vast majority of people in this country, that’s just an inspiring one minute and 11 seconds in that rally last night.  That is nothing but upbeat and positive and optimistic. It’s a rallying cry, and it is comforting to hear.  It’s great for people who think, who have believed that our country is purposefully being taken in the wrong direction, this is prayers being answered to a lot of people who love their country and who have been scared to death about the direction it has been going and been taken.

So there’s everything in that little one minute and 11 second sound bite.  There’s everything you’d want to know about why Donald Trump won the election, right there, one minute and 11 seconds.  And I’m telling you that the Hillary campaign, the American left, Democrat Party are in utter denial and anger to the point they can’t even properly understand or hear that, because their minds are so poisoned with their prejudice and their belief that white supremacy is now ruling the country.  Think of the kind of garbage the people who believe that have literally been taught.  Think of the filth, the drivel, and the bilge that has been the education of people who believe that white supremacy is now the order of the day.

RUSH:  I just got an email.  Checked the email during the break.  “Rush, did you see how Trump introduced ‘Mad Dog’ Mattis the way you used to tweak the media?”  Oh, yes, I saw that.  Did you guys watch this last night?  Did you see the way he introduced Mattis, Mad Dog, as defense secretary?  You didn’t see it?

He said (imitating Trump), “Okay, folks, look, I don’t want you to tell anybody, okay, we gotta keep this in the room.  It’s a secret.  I’m not telling anybody else until next week.”  Now, the whole thing’s on TV all over the world.  “But I’ve got a big announcement, and I’m not gonna make it until next week, so shh!  The media’s in the back of the room but they won’t hear it ’cause they never pay attention anyway.  I’m gonna tell you Mad Dog Mattis is the new defense secretary.”

Now, of course, I particularly admired that because I frequently on this program say to you, “Hey, folks, psst, don’t tell anybody.  In the next 20 minutes I’m gonna do something.  You’ll recognize it.  It’s gonna tweak media, it’s gonna freak ’em out, and the headlines are gonna be something along the lines of I’m a reprobate tomorrow.  Just want to let you in on it.”  I used to do this all the time.  “Here the media, for all I know, be listening.”  But you know what that is?  You know what that device is?  In addition to being a device of humor, it’s a device that connects.

They don’t recognize the genuine humanity that occurs at one of these rallies.  They don’t understand the connection.  They don’t understand how Trump conveys his love for them.  It’s right in front of their faces, and they don’t see it, they miss it.  They don’t see or hear Trump express his appreciation and his thanks, even when he uses the words.  They don’t see that love and respect sent back to Trump.  They see a bunch of people going nuts, “Lock her up, lock her up!”  They do not see this bond of, call it what you want — love, support, devotion, what have you, and it goes both ways.  And it’s existed since Trump came down the elevator on June 16th of last year.  And they don’t see it.  Maybe most people don’t.  I do.

I’ve spotted it from the get-go.  And it was on full display last night.  And it’s entirely wholesome.  It’s the essence, in fact, of politics, what politics ought to be.  It’s genuine.  Nobody’s BS-ing anybody, nobody’s lying to anybody, nobody thinks they’re being lied to and having to shelve it. If they find out they are being lied to there’d be hell to pay, but they don’t think they’re being lied to.  They’re not suspicious.  They would be of anybody else up there telling them things, but they’re not of Trump.  They know him, they trust him, they feel entirely comfortable with him.  And maybe some people do get that and are jealous.  I don’t know.  But I still think that most don’t get it.

He didn’t want anybody misunderstanding.  He told them how hard it’s gonna be, but then he did something else.  He asked for their help.  “Will you join me, will you help me make America great again?”  He was asking people to stay as engaged as they were in the campaign as he’s inaugurated and becomes president.  He told them he needed them.  There’s no greater way to get people to respond to you than tell them they’re needed.  By the way, you are, folks.  You are going to be needed.