RUSH:  One little bit of additional information on Algore traipsing into the Trump Tower to meet with Ivanka. Again, this is all third-hand.  I don’t know any of it to be… Well, I do know that Algore went there.  Somebody said they saw him in the elevator cam.  You know you got an elevator cam.  Just showing him come out, saw Algore come out.  Okay.  That means he went in.  If he came out, he had to be in there, right?  So it’s true that he went in there.  Now, The Politico is saying, “according to a source close to Ivanka…”

For those of you in Rio Linda, that means it’s not Ivanka talking. It’s a source close to Ivanka, which means it could be somebody in the household staff, it could be somebody in the clerical staff, it could be her husband, could be a good friend, but it’s not Ivanka.  Politico says “a source close to Ivanka” told them at Politico that Ivanka “wants to make climate change one of her signature issues and that she wants the job of climate czar in her father’s administration,” and she is moving her family to Washington.

There are new people tuning in each and every day who are not up to speed contextually, so just indulge me here while I bring ’em up to speed.  The climate’s changing all the time and nobody denies that, but the idea that we control it is what’s absurd, and the idea that there is man-made climate change is absurd.  And, you know, even… It is not true. There has not been any documented temperament increase! In fact, this hoax, can I tell you one thing it’s about, the one thing?

The pro-climate change people have done a great job of complicating this with a whole bunch of esoteric scientific lingo making it sound like it has the official imprimatur of people that wear white lab coats.  If they wear white lab coats, they have automatic credibility. They’re either scientists or doctors or what have you.  The entire concept of man-made climate change is based on one thing, and that is computer models, not data, because there isn’t any data.

How many times do you hear a climate change prediction include something like, “And in the next year or two, temperatures are expected to rise one or two degrees centigrade”?  You never hear that, do you?  You always hear, “In 30 years, maybe 25, certainly in 50 years.”  Well, I could predict something that’s gonna happen 30 or 50 years from now and sound like a brain doing it.  They predict things 30, 50 years out; none of us are gonna be alive to know whether they’re right or wrong.

They’re not gonna predict anything where the lack of data could show them to be lying about it, but there are.  We have emails from the University of East Anglia in the U.K. that demonstrate how the scientists involved here have made up data in and among themselves to thwart the actual historical record.  There is no warming, so they have lied about how warm or cool it was in the medieval period or any number of basis to convince people that it’s warming, but it’s all computer models.  There isn’t any empirical data of warming.

It’s all based on data produced by computer models, and that data is only as good as the data that’s being input into the model.  If it’s fraudulent, you’re gonna get a fraudulent result.  But the one thing, the one thing, folks, on which all of this is based is CO2.  CO2, the greenhouse gas. It is a wild guess, and nothing more than if we double the amount of CO2 in the atmosphere, that we’re going to raise temperatures on the surface of the earth in ways that make it very difficult to be living on the planet in 30 or 40 years.

Trump is on record as saying that he doesn’t believe in man-made climate change, but his daughter met with Algore today. She wants to be climate czar.  So this is one of these things that I’m waiting with at arm’s length, because, folks, the climate change issue is all of communism wrapped up in one bundle.  Militant environmentalism actually is the new home for displaced communists after the Soviet Union imploded, and if the leftists and the communists promoting climate change — if they were ever able to, via policy, realize their dreams — we would have a worldwide communist government.

That’s among the many things that’s very bad and wrong about all this.  But these are the people behind it and sponsoring it, and that’s why it’s so important that it has got to be shellacked and resisted.  And we’ve had some success, because it’s not even in the top 10 of the most important issues to people — and yet, look, you can’t stop hearing about it, can you? No matter the fact they know people don’t care. No matter the fact they know it’s not that important to people. They keep drumming it into you.

They want you to think it’s your fault so that you will accept globally mandated behavioral controls, loss of freedom in order to “save the planet,” to give your life meaning and all of that.

RUSH:  Here’s Algore coming out of Trump Tower today.  A reporter’s asking him questions.  He’s in the lobby.  This is the lobby noise microphone.  Here’s what he said.

GORE:  The bulk of the time was with President-Elect Donald Trump.  I found it an extremely interesting conversation and to be continued.  And I’m just gonna leave it at that.  Thank you. 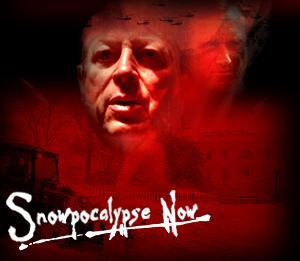 Edward Snowden said that the stuff Petraeus revealed, the classified data he revealed in the back-and-forth communications with his mistress is worse than anything Snowden revealed.  So apparently Romney is now not at the top of the list which gives people pause, “Well, then what was all this about?  What was dinner, what was all this about?”

And there are two competing thoughts.  And one is that Trump was paying Romney back by making it look like Romney had a chance to be secretary of state, wining and dining him, giving him all kinds of attention and respect and never intended to choose him.  This was nothing more than a Trump payback and public humiliation for Romney.  Some people believe that.  I don’t.  But a lot of people do.

I think Romney was under serious consideration.  And then Rudy.  Rudy was under serious consideration.  And Rudy, you can’t find anybody more loyal.  But you know what the word on Rudy is is that Trump is very unhappy with Rudy because he’d been publicly campaigning for the gig.  That does not compute with me, folks.  Donald Trump and Giuliani are great friends, and if Rudy was doing something that would hurt his chances, Trump would tell him. He would call. “Knock it off, Rudy. I know you want the gig. Stop it.”

But I don’t know Rudy was doing that.  Have you gotten the impression Rudy was publicly campaigning, groveling for the job? (interruption) Well, that’s the — again, just the scuttlebutt.  This comes from somewhere. It’s coming from somewhere inside Trump.  That’s what makes this stuff fascinating.  It’s just great.  Somebody’s putting it out there that Trump has gone soft on Rudy ’cause he doesn’t like Rudy publicly campaigning and he’s worried Rudy’s potential conflicts of interest, Rudy’s business ties? Come on.  Trump’s got his own in that regard.  That can’t be it.

You know, Huntsman and Romney, two powerful Mormon families, and they don’t get along all the time. So Trump is bringing in Huntsman to further humiliate Romney. (interrupting) No, there’s some people say that.  I find it… I’ve always told you, I find it fascinating to learn how people think, particularly when they get into the conspiracy side of things. So Trump would bring in Huntsman and have that publicly known just to humiliate Romney.  “He wouldn’t in any way want Huntsman to be secretary of state.

“Why, Huntsman’s got Obama ties,” which he does.  Wasn’t Huntsman an Obama ambassador at some point, ChiComs?  So Petraeus, Bolton, now Algore. What if he’s in the SecState mix?  What if he’s in the secretary of state mix? I’m gonna tell you something.  If Trump goes south on climate change, I am gonna… That’s just gonna be deeply disappointing and alarming because of what climate change is to the left.  It’s everything.  It’s everything they want and everything they believe, and it’s almost everything they can get to achieve it to accomplish it.

It’s that bad.  That’s why I spend so much time, so many years on this trying to persuade people to don’t get anywhere near sidling up to this notion of man-made climate change.  It’s one of the most bogus hoax scams run on the people of the world, and it ought to be proven simply by the fact that it originates at the U.N.  That’s all anybody ought to know, or need to know.