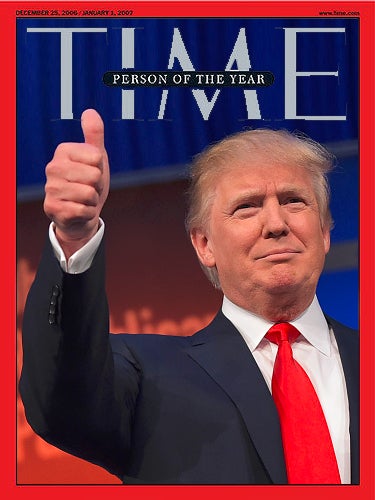 RUSH: It’s that time of year, by the way, folks. TIME magazine’s Person of the Year. Who do you think is in the running? “Oh, it has to be Trump. It just has to be Trump.” You want to hear the list of potentials? Here we go. “Donald Trump…” This from the U.K. Daily Mail: “Donald Trump faces off against Hillary Clinton, Beyonce, Vladimir Putin, and Simone Biles for TIME Person of the Year.” Simone Biles. “

Donald Trump is a finalist for the Time Person of the Year for the second straight year. He is up against a group that includes Beyonce, Hillary Clinton, Vladmir Putin, Simone Biles and Mark Zuckerberg. Indian Prime Minister Narendra Modi, who is also a finalist, was the winner of the online reader’s poll for the Person of the Year honor.” There certainly is not a person that has had more effect on the world than Donald Trump.

There shouldn’t be anybody else considered. Look at these elections all over the world. Trump is a new leader. Gone is the prime minister of Italy. Gone is the guy that was running the U.K. The European Union is crumbling. In France they’re gonna elect a right-wing government. The Australians are the only holdouts here, but the world scene consists of dramatically new direction and new leaders and so forth, and it’s all Trump.

I happen to love the Christmas season. It dates back to the romanticized specks of my childhood with it, our family was big into Christmas, both religiously and just culturally, and I just have some of my fondest memories of that time of year. Mannheim Steamroller music has specific attachment to me related to the death of my father. I won’t bore you with the details of that, but Chip Davis and the guys, I’ve been with them on tour now and then. They even gave me a jacket once in Chicago one of their performances, just fabulous. If you ever have a chance to catch them in person in concert, Mannheim Steamroller, it’s well worth it.

I could not sleep on Christmas Eve as a kid. No matter what I did I was so excited I could not sleep. So I actually wrote down, put together an itinerary, what to do at 1 a.m., what to do at 1:30, what to do at 1:45. I started plotting how early I could go downstairs, if I could get away with sneaking down at 4 a.m. just to get a quick sneak peek. My father figured that out, was sleeping in an easy chair so I got foiled with that. I mean, this was a multiyear plan that I had.

There were no radio stations playing regular music on Christmas Eve. Everyone, you know, live from the Vatican or taped Christmas music or what have you, which back then I was not all that into. I was just hoping that one of my top 40 stations would be playing top 40 all night so I could pretend to play deejay. (interruption) Oh, 6, 7, 8, 9, 10, whatever.

But I could not sleep. I was so excited. I mean, look, when December 1st hit, I couldn’t sleep, I started getting so excited. And you people wonder why I like Apple so much. When Steve Jobs died, one of the things I mentioned is the Apple stuff, I love it so much, honest, best way to express this is that when there’s new Apple stuff out and, you know, you can’t find it when it comes out, they make sure that you can’t find it. Their supply and demand is altered in such a way to create more demand by limiting supply.

So the search for new Apple stuff is kind of like Christmas morning when I finally get it. It’s the same feeling when I get any new Apple stuff, when I’m 65 years old, I feel like I did when I was 10. I mean, anything and anybody that can help a 65-year-old feel like a 10-year-old again, that’s worth something. I mean, how many of you at age 60 or 65 are able to recapture whatever feelings of magic and euphoria and happiness you had when you were a kid?

There’s not much. You become too experienced, too cynical. You become too knowledgeable. The things that you were all excited about you now have a little bit more knowledge than you did. So now to be able to recapture those childhood feelings, which are just dream-like and innocent as they can be, I think it’s just fascinating. So that’s part of my attachment to it. Of course there are religious reasons as well.

How many times did you hear that? Enough times to never forget it, right? Trump didn’t want to win. He knew he wasn’t gonna win. He wasn’t serious about it. He was just setting the stage and establishing the foundations for an eventual Trump news network. “Barack Obama Considering Post-Presidential Digital Media career, Sources Say —

“President Barack Obama has been discussing a post-presidential career in digital media and is considering launching his own media company, according to multiple sources who spoke on background because they were not authorized to speak for the president. Obama considers media to be a central focus of his next chapter, these sources say, though exactly what form that will take — a show streaming on Netflix, a web series on a comedy site or something else — remains unclear.”

Obama on a comedy site? You know, Obama’s a lot of things, but a comedian and funny on purpose, anyway, is not one of them. “Obama has gone so far as to discuss launching his own media company, according to one source with knowledge of the matter, although he has reportedly cooled on the idea of late. When contacted for comment, White House communications director Jen Psaki told Mic in a statement, ‘While the president will remain actively engaged in inspiring young people and he is interested in the changing ways people consume information, he has no plans to get into the media business after he leaves office.'”

Isn’t this just too cute. First it was Trump threatening democracy by refusing to accept the election results, and then when they come in it’s the Democrats threatening democracy and refusing to accept the results for which they castigated Trump for in advance. And all during the campaign they told us Trump had no interest in winning, he wasn’t doing this for any reason other than to set the stage for Trump news. The election comes and goes, and now we find out that it’s Obama who wants to set up the Obama news network. It is stunning how wrong these people have been and how wrong they continue to be.