RUSH:  I got an email over the break the top of the hour, and it was from somebody in New York City. They said, “Mr. Limbaugh, doesn’t it worry you this ‘Make America Great’?  What does that mean?”  So I looked at that, and my question is: What’s so scary about it?  What in the world could “Make America Great…”? How would that frighten somebody?  What must you conjure when hearing Trump or anybody talking about “Make America Great Again” (which is actually the phrase)? Why would that scare you, or why would alarm bells go off? What could that possibly mean?  Well, you’d be surprised.

To a bunch of people on the left, you know what it means?  You know what they will tell you they think it means?  And I’m not making this up.  They will tell you they think it means a return to slavery.  Do you realize the Democrat Party…? I’ve watched it on television.  I watched these Democrat guests — reasonable people, Democrat strategists, not off-the-street Looney Tunes — who literally believe they lost because Trump mobilized a racist white supremacist majority in this country.  Now, stop and think of this for a moment.  When any racial group seeks political power — and the left looks at people by group, by the way.

They believe those two things are why they lost.  White supremacists and the Russians tampering with elections.  Elected Democrats literally believe those things.  Now, see, Mr. Snerdley just said to me in the IFB, “They have to know better.”  See, I used to think that they knew better, they were just saying that.  I have revised my thinking.  I think they really believe it.  You’re looking at it logically, you’re looking at this logically.  You’re saying there aren’t enough white supremacists to influence anything.  Absolutely true.

Logic would say there aren’t enough white supremacists, but are there any?  When you get right down to it, white supremacists?  I mean, you could put ’em in a phone booth, for crying out loud.  However, there are black supremacists.  There are all kinds of minority supremacists, and they are perfectly fine in that state, according to the left.  But whenever white people happen to vote their interests, have you picked up on the fact that that’s somehow illegitimate?  But when any minority votes its interests, whether it be economic or cultural, when any minority votes its interests, why that’s perfectly fine, it’s justifiable, makes perfect sense.  When white people do it, it’s unacceptable, it’s white supremacism, and it’s racism.

Well, that’s just absolutely absurd.  So when you start talking about making America great again, the people I’m talking about literally quake with fear.  They literally do.  “Make America Great Again,” it’s the “again.”  They get lost in their emotional swirl thinking that we want to take the country back 200 years to the founding and the years shortly thereafter.

Can I tell you what “Make America Great Again” is to Trump?  I’ll tell you exactly what it is to Trump.  Yesterday was Pearl Harbor Day and I was not here.  I had to take the day off.  We commemorate Pearl Harbor Day every year on this program by offering a few moments of reflection to remember it.  Now, I’ve talked about what happened in the 1930s in this country in the midst of the Depression. You look at what we built in less than seven years during the Depression in the 1930s.

The Golden Gate Bridge that’s still like brand-new today. The San Francisco Oakland Bay Bridge went up at the same time.  It doesn’t get nearly as much attention because the Golden Gate Bridge is just iconic for bridges.  The Hoover Dam.  Prior to that was the Panama Canal.  Building things, expanding.  If you look at World War II, look at what happened. People don’t stop to think about this, particularly now, and it’s largely because we’re never gonna fight wars anymore the way we fought them in World War II.

Technologically we are so far beyond that.  We don’t need Rangers rappelling up a 200-foot-cliff to take German gun installations at the top of Pointe du Hoc. You simply send some drones over and wipe them out. But back then we didn’t have the technology we have today.  World War II, we’re not in a war footing at all and we’re attacked by the Japanese at Pearl Harbor.  World War II had been going on in the European theater for quite a while.  We had studiously avoided it, which produced its own controversies at the time.

You’ve heard the story of Rosie the Riveter.  Everybody went to work in the factory to start manufacturing what was necessary to fight the wars.  We could not do that today.  Not as we did then.  I don’t mean this to be critical, just illustrative.  Look at how long it took to simply decide on what was going to replace the World Trade Center after 9/11.  Both of those towers, had it been the 1940s, would have been rebuilt inside of five years.  Again, not a criticism, just an observation.

Now, from his perspective, there are a lot of things in this country that have been allowed to slide that are not in tip-top shape that are deteriorating and about to fall over and fall down in our infrastructure and in a lot of other places.  And I think it’s simply unacceptable to him.  And he’s simply referring to things like that.  But he’s also talking about human capital.  Whatever we decide to do, we’re gonna be the best, we’re gonna find the best to put in charge of these programs that are gonna end up being the best when we complete them.

But to so many people on the left, that whole concept escapes them.  That doesn’t even show up on their radar.  “Make America Great” means a return to the days of slavery and white supremacism and the KKK and women with abortions in the back alley.  It is a new kind of stupid.  “Make America Great” means we’re going to, oh, my God, we’re gonna let the ice caps melt and there isn’t gonna be a New York and I’m not gonna be able to survive on the planet when I hit 65.”

That’s what “Make America Great” means.  We’re gonna abandon all of these wonderful new projects to fix nonexistent emergencies like climate change, which used to be global warming, but it’s climate change ’cause now we got this massive cold front sweeping in from Alaska.  You know, there’s a football game tonight, the Oakland Raiders at the Kansas City Chiefs.  And it’s gonna be about 20 degrees, 15, 20 degrees below normal.  It’s gonna be colder than a witch’s upper torso out there, and the place is gonna be full.

The Raiders, it’s a short week, they have to travel three hours, 1,500 miles, after having played a game on Sunday.  They’re at a clear disadvantage ’cause of that, but this is such an important game tonight.  And it’s gonna be played in weather so cold that should not happen because of climate change and CO2 warming the planet and all this kind of stuff.  I think that’s all “Make America Great” means.  It means what common sense would tell you it means.  And the fact the left is so afraid of that ought to open a lot of people’s eyes. 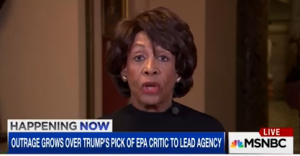 Folks, do not doubt me.  Now, granted, you’re gonna have some Democrat strategists go on TV who are going to pander.  They’re gonna figure that, you know, the collective IQ of the audience may be that of a pencil eraser. So they’re gonna tell ’em what they want to hear and that is that they didn’t lose for any reason other than white supremacists. But I’m telling you, there are a whole slew of Democrats that believe this garbage, and they believe that Putin tampered with the election.  They believe it!  It’s inarguable.