1984: Ted Kennedy Secretly Asked for Help from the Soviets to Defeat Reagan

RUSH: I want to remind people, we were the first, this program was the first to actually make big news out of this.  When the Soviet Union imploded, when the Berlin Wall came down and Soviet communism came to a screeching halt — communism did not.  Soviet communism did.  But communism didn’t lose anything.  Communism just kept right on going.  They found a new home in the environmental movement and they’ve been off to the races.

Many people are laboring under a misconception that with the fall of Soviet communism, we also saw the defeat of communism in general, and we didn’t and we haven’t.  The Soviet Union as a nation ceased to exist, but now Putin is back, and he’s KGB, and he’s doing what he can to put it back together.  He doesn’t ever want it called “communist,” but he does want an all-powerful mother Russia with a bunch of satellite states and so forth.

The Democrats really believed that the world was threatened by Reagan being the president, and so they sought counsel with Soviet leaders.  We found out about this. After the Soviet Union imploded, it resulted in a lot of things.  And one of the things that happened is a bunch of KGB files ended up being released, opened up, and it was a treasure trove of discovery.  Boris Yeltsin in 1991 saw to it that everything the KGB had been doing was revealed because back in those days the new leaders of Russia didn’t want to have anything to do with the old Soviet communist regime, and they didn’t want anybody thinking that there was any remaining linkage.

So a program of transparency erupted and Boris Yeltsin just opened up everything.  And one of the interesting items found was a memorandum addressed to the then top man in the USSR Yuri Andropov.  The memo was written by Viktor Chebrikov, who was the top man at the KGB.  The subject of the memo from the top man of the KGB to Yuri Andropov of the Soviet Union was: Senator Edward Kennedy on 9 and 10 May of this year.  Senator Edward Kennedy’s close friend and trusted confidant, John Tunney, was in Moscow.

Tunney was Kennedy’s law school roommate and a former Democrat senator from California.  And Tunney was one of these guys like Chris Dodd, they’d run around and waitresses would end up being in sandwiches between one of the two guys at restaurants in Washington, DC.  But Tunney and Kennedy were tight.  And Senator Kennedy asked Senator Tunney to convey a message to Yuri Andropov.

The message was simple.  Kennedy proposed that the United States would lend Andropov a hand in dealing with this out of control cowboy Ronald Reagan.  In return, Andropov would lend the Democrat Party a hand in challenging Reagan in the 1984 presidential election.  We brought this to your attention seven years ago.  I’ve mentioned it several times since then, but it’s worth reminding all of you since it’s being totally ignored by the Drive-By Media, and it always has been. 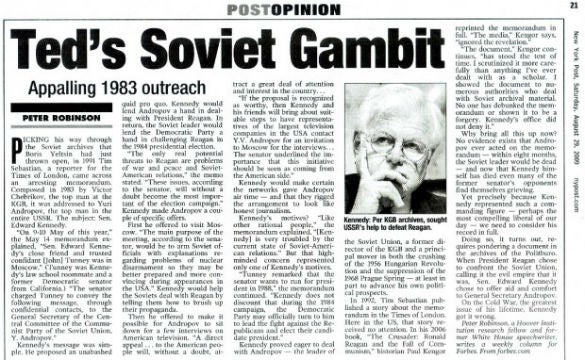 The Drive-Bys have never told this story.  It was August 27, 2009, where I first discussed this, when I first learned of it.  Essentially Kennedy, through Tunney and other intermediaries, was sending memos and communiques to the president of the Soviet Union, the chairman of the Communist Party (Yuri Andropov at the time) asking him to be patient and don’t overreact to Reagan, that Reagan doesn’t know what he’s doing. He’s a cowboy. Work with us, Kennedy said, and with your help, we can get rid of Reagan in 1984.

Ted Kennedy actually sought the assistance of the Soviet Union in 1984 in defeating Ronald Reagan in the election.  In other words, what I’m telling you is — and it’s in the KGB files.  I’m not even expanding what this is.  Ted Kennedy was asking for Yuri Andropov’s assistance in the form of interference in the presidential election of 1984. The memo said, “‘The only real potential threats to Reagan are problems of war and peace and Soviet-American relations. These issues, according to the senator, will without a doubt become the most important of the election campaign.’

“Kennedy made Andropov a couple of specific offers. First, he offered to visit Moscow. ‘The main purpose of the meeting, according to [Tunney], would be to arm Soviet officials with explanations regarding problems of nuclear disarmament so they may be better prepared and more convincing during appearances in the U.S.A.'” In other words, Kennedy was offering the Russians, the Soviets, assistance in resisting Reagan’s proposals on nuclear disarmament.  Ted Kennedy and the Democrat Party — let me just cut to the chase — were undermining a sitting United States president and planning on the Soviet Union assisting in the election in 1984.

The way that was gonna happen, is they wanted the Soviets to be totally uncooperative.  They wanted the Soviets to talk about Reagan and to react to Reagan as though he was a dangerous threat to mankind, to portray Reagan’s proposals as inhumane and uncivil and just acceptable and indecipherable.  That was the plan for the assistance of the Soviet Union in the 1984 election as devised by Ted Kennedy.  ‘Cause remember, now, the Democrats were singing the praises of the Soviet Union, in all ways, as a superpower, as a counterbalance to the United States’ status as a superpower.

Back in 1984, the Soviet Union was establishing beachheads in places like Nicaragua with the full aid and support of Democrats in the House and Senate.  Daniel Ortega of Nicaragua would come to New York and be taken on shopping sprees by Peter, Paul, and Mary and that would end up being in the news and that was to portray him as a wonderful guy. “Why, look! He loves Peter, Paul, and Mary. You know, Puff the Magic Dragon? They like Ortega.”  The whole thing was designed to undermine Reagan as some madman and to convince the American people the only way that the Soviets could be trusted not to launch a weapon against us was to get Reagan out of office.

A horrible candidate who called half the country deplorables! A woman who had no agenda.  She’s running against Donald Trump and thinking, “Nobody’s gonna vote for Trump. Trump’s a madman!” She didn’t even campaign. She didn’t even go to Wisconsin and Michigan, some of these states.  So in the bag did they think the election was, she wouldn’t even go to campaign rallies because she couldn’t draw flies to them.  Her only agenda was “Trust me.  I’m competent.  I know Washington.  I love the children.”

What have you done for children?

“I’ve been working with the Children’s Defense Fund for 30-years.”

“What have you done for children? Where’s the endless parade of adults who survived childhood because of you?  Where is this endless parade of people who give you credit for whatever it is they’ve become?  Zero, zilch, nada!” Hillary Clinton has been an entitled queen in her mind ever since she arrived in Washington, and maybe even prior to that.  The most cheated-on woman in America.  She had no business winning this election.  Everything that was supposed to happen did.  She was not a good candidate.  She was not attractive.  She was not appealing.  She was not engaging.  She didn’t have any charisma.  She couldn’t draw flies.

Everything worked out as it should have, and they can’t accept it.