Be Optimistic About the Next Four Years! Don’t Fall Prey to Silly Liberal Memes


RUSH: Jim in Hanover, Pennsylvania.  I want to start on the phones early today.  Great to have you.  How you doing, sir?

CALLER:  Hey, I was listening to you talking about Maureen Dowd and Seth Meyers at the top of the show and I was laughing because for the last eight years I haven’t watched the news or the late-night talk shows or whatever. They’re just not funny and it’s always depressing. But since the election, boy, I can’t get enough of it.  I just have to turn on the six o’clock evening news and I just laugh so hard, and I was thinking, you know, you always talk about the college kids being snowflakes, but boy the meltdown that I’ve seen —

CALLER:  — with Seth Meyers and some of those other ones. They’re not funny but it’s hilarious.

CALLER:  Every one of them.

RUSH:  Well, I’m glad to hear that.  Can I share?  I’m getting a little fed up with some of the pessimism that I’m hearing.  Not from any of you, but from friends of mine who are worried that the media stuff is gonna — it’s a frustrating thing to me because I know a lot of people, no, no, no.  I don’t know a lot of people.  I know some people — I’m sure you do, too — who will not be convinced we’ve really won anything until the media changes.  And that isn’t gonna happen.  So they look at the media not liking Trump and they think it’s failure.  They look at the media ripping Trump and destroying Trump and they think it’s gonna work and it means failure.

And I get so fed up.  I said, “Do you people not understand we’re on the cusp here of one of the most exciting next four years?”  The growth potential, the potential of putting this country back together or getting started on that is off the charts. I’m with robust optimism here, and I get a little —

RUSH:  — fed up with these naysayers.  So I’m glad to hear from you out there.

CALLER:  You know, I think I may actually smoke a celebratory cigar, and I know you’re an expert.  What would you recommend?

RUSH:  Celebratory cigar.  You can’t go wrong with anything Padron.

RUSH:  Padron.  Choose your size. Some people like the Padron Maduro, the dark wrapper.  I prefer the non-Maduro, but you can’t go wrong with either one.  Anything from Arturo Fuente.

RUSH:  You know, when I start doing this I’m gonna anger all these cigar people whose names I don’t mention.

CALLER:  I just thought I have to smoke one and I thought, man, you’d be the best person to ask.

CALLER:  You’re such an aficionado, expert.

RUSH:  I am.  I am.  And then there are differences in them and there are some that are much better than others.  I’m just gonna give you the name Fuente Don Carlos No. 2.

RUSH:  Or one of the Padrons.  Ashton, there’s so many. Rocky Patel, Rocky Patel, you know, he’s got a cigar named for Gary Sheffield who played for the New York Mets, some other teams, and it’s —

CALLER:  Oh, my.  Absolutely.  Thank you very much.

RUSH:  Now, what size would you like?  Do you know the difference in the two?

RUSH:  Good for you.  What’s your carrier?

CALLER:  Black or whatever you have the most of, whatever’s not moving fast enough.

RUSH:  I can cover you, you want black, jet black, or do you want the matte black?

CALLER:  Well, what do you recommend?  Whichever you have the most of.  I’m not picky.

RUSH:  It’s not a factor whichever I have the most of.  When I start giving stuff away, I don’t run out.

RUSH:  Here’s the thing.  Both blacks are new, jet black and matte black.  The jet black is an actual shiny piano black, and it has been the toughest to get because it’s the toughest to make.  It does show fingerprints on the back, but it has a different feel.  It’s not as slippery in your hand.  The matte black is just as gorgeous but it’s matte, it’s not shiny and it doesn’t show fingerprints or any of that.  Both have the same front.

CALLER:  Well, I play the piano, not as well as your nephew, not by any means, but I do play the piano so I’ll go with shiny black then.

RUSH:  Shiny jet black.  So you’re AT&T shiny jet black.  Let me tell you, this phone’s gonna come unlocked.  It’ll work on any carrier.  It has no SIM card in it.  What kind of phone do you have now?

CALLER:  It’s a Chinese knock-off brand that I got in college and all the college kids —

RUSH:  Irrelevant.  So you’ll have to take the new phone to an AT&T store.  Tell ’em it’s a gift.

RUSH:  They will know that it’s unlocked ’cause it doesn’t have a SIM card in it and tell ’em to move the number from the Chinese knock-off over to the new phone and you’ll be up and running.  Hang on so we’ll get your address and get it out to you. I appreciate it.  That’s Jim.

Mindy in Cincinnati.  Mindy, welcome, great you have to in the EIB Network.  Hello.

RUSH:  Tillerson’s choice as secretary of state concerns you for the small business guy?

CALLER:  Well, I mean he’s appointing a lot of cabinet members that are wealthy businessmen, billionaires, millionaires, and I’m worried how that’s gonna affect the small businessmen coming down the pike.

RUSH:  Why?  Are you worried that these picks of his are not —

CALLER:  Well, I’m just afraid that they’re not gonna pay attention to the small businessmen.  I’m afraid that with all these big billionaires being appointed to the cabinet that they’re gonna forget about the little guy.

RUSH:  How so?  Tell me how you think that’s going to manifest itself.

CALLER:  Well, I just think they’re focused on Big Business, you know, they’re trying to bring all this stuff back into the country, and I’m just worried that they’re not gonna build up the small business guy.  They’re gonna forget about ’em.  And I’m just worried about that. 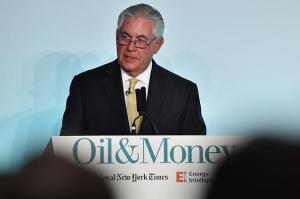 I think he’s got these successful big guys in there that he’s choosing, and not all of them are in cabinet departments that have to do with business.  He’s got successful people who’ve navigated the waters, and these guys are not exclusive.  They’re not trying to deny anybody else success.  These are the people that try to shower everybody with it, open up the avenues of success for practically everybody.  That aspect, I don’t have any concern about that.  I don’t think there’s any evidence that Trump is uninterested or has any kind of an animus against small businesspeople.  I think it’s just the opposite, in fact.

CALLER:  You think so?

RUSH:  Yes.  Now, if you can cite me something specific that you’ve heard Trump do or say other than —

CALLER:  No. Just with all the picks and — like he’s gonna have the richest cabinet ever in —

RUSH:  You’re falling prey to the notion that a rich person’s not to be trusted, that a rich person doesn’t care about you anybody else, that the rich people are trying to arrange the deck only for themselves.

RUSH:  It’s not true.  These are people who manufacture products and provide services they know the middle class has to be able to afford.  If whatever you make or sell or whatever service you provide is priced in such a way that your own employees can’t afford it, you’re not doing something right.  I don’t know about all of them, but I don’t think any of them were born into this.  I think they all started small, they know what it takes.  That’s what Trump likes.  They know what it takes to get there.  They have done it.  They have faced adversity, they’ve climbed the ranks.

Rex Tillerson.  Rex Tillerson started at Exxon in 1974.  It’s the only place he has ever worked, and he didn’t start in the executive suite.  He worked his way up to it and had to win a very fierce competition to get CEO after Lee Raymond, who was the preceding CEO, retired.  I’d be very, very careful about falling prey to the same things that liberals say about people, and that is rich people are automatically untrustworthy.  They love to use class envy and they love to attack the whole notion of trickle-down economics by pointing out the rich are miserly and they don’t share and they don’t give and they don’t… It’s all a bunch of… It’s not true.

RUSH: Jet black.  It will be yours.  Yours also will come without a SIM card, unlocked.  It’ll work on any carrier, so… What phone do you have now?

CALLER:  I actually have just a TracFone. (chuckles)

RUSH:  Okay.  Then take that phone and the new one to the AT&T Store.  They’ll have to put a SIM card in your new one with your number on it and they’ll move 2 from that phone now.

RUSH:  Take it in the box so they have all the numbers that go with it and you tell ’em that it’s a gift and that it’s unlocked from the factory and they’ll set you up, okay?

RUSH:  After chatting with Mindy, I checked something, and I found something from Bloomberg today.  “Small Business Owners’ Optimism Skyrockets Following Trump Victory,” and here’s what this article in Bloomberg says: “President-Elect Trump’s victory in the U.S. elections is a giant leap for small businesses, according to a survey of small business owners.  The November reading of the National Federation of Independent Businesses’ Small Business Optimism Index jumped to 98.4 from 94.9.

“That’s the biggest surge since 2009,” Obama’s first year in office,” with all of the increase in sentiment coming after the elections held on November 8th — and among those who were surveyed following the election, the balance of opinion on whether business conditions were expected to improve skyrocketed from a reading of minus six to plus 38.”  Small business optimism is off the charts out there, Mindy, according to a Bloomberg story today.

And look at who Trump is going out… Look at who one of his constituency groups is: white working people.  Now, you might think that they work in major corporations, but these are not highly paid, wealthy people.  They are the people Trump is championing.  Those are the jobs that Trump is trying to save or bring back into the country, no matter who employs them.  I would really guard against falling prey to any liberal criticism of conservatives and Republicans here because it’s rote and it’s been made for decades.