RUSH: James Baker is, in the eyes of many — you would agree, Mr. Snerdley — Mr. Establishment.  I mean, there is no Republican equivalent of David Gergen in terms of defining conventional wisdom.  James Baker, he was in the Reagan administration, the Bush administration, he’s a consultant for — He ran the recount for George W. Bush in Florida in 2000.  He is connected.

BAKER:  I’m not worried about that, Charlie, because he was doing, in getting close to Vladimir Putin, he was doing what he should have done for the shareholders of ExxonMobil, and that is make good deals, good agreements with foreign powers.  Now he’s gonna be sitting in the secretary of state’s chair on the seventh floor of the State Department, and I guarantee you he’s gonna have a different outlook.  He’s gonna be looking at formulating and implementing American foreign policy on the basis of the principles and values of this country and in the national interests of this country.

So fill-in co-host Alex Wagner, a female on CBS This Morning, same show as Charlie Rose, she then said, “You’re a partner in a law firm that represents ExxonMobil and some of the Russian gas companies that do business with ExxonMobil.  So, Mr. Baker, do you have any experience working with Rex Tillerson?  Do you think that it at all complicates your support?”  In other words, she’s saying, “Okay, look, you work with the guy.  Your law firm represents the guy.  How can we believe anything you say, Baker?”

BAKER:  I’ve never done anything for the company in which Rex was directly involved.  I know him.  He’s a friend of mine.  I hunt elk with him, and I have great confidence in —

BAKER:  — his ability.  This story that somehow I was out there pushing Rex early on is not correct.  When the transition people for President-Elect Trump called me, I gave him really high marks.  That call came in Monday, day before yesterday.  So some of the reporting that you’ve seen on that that somehow I was pushing him because of my firm’s representation of ExxonMobil, that’s not true.

Same show CBS This Morning, Charlie Rose takes back over from Alex Wagner, who interrupted him, and Charlie says, “Some people looking at the future Trump administration believe there are too few people who have a strong view to protect the planet.”

I’m gonna have to figure out a way of dealing with this, because this really tries my patience.  Do you realize Charlie Rose is actually asking James Baker, there’s a lot of people that Trump’s getting here that don’t care about the planet.  Have you ever heard anything more absurd?  This whole idea that Republicans don’t mind pollution, they don’t mind dirty water, and that these CEOs love polluting the cities they live in?  They love polluting the air?  It’s absurd here, these assumptions.  And that Trump doesn’t have anybody that cares about the planet?

We’re just specks of dust on the planet anyway.  This idea that we can destroy the planet is just flat-out silly.  But, anyway, I interrupt myself again.  And I’m sorry, folks, this stuff just really, really frosts me, and I’m getting ahead of myself because that has nothing to do with the answer.  Let me start again.  Charlie Rose, “Some people looking at the Trump Regime believe there are too few people that have a strong view to protect the planet and who have strong views about the dangers of global warming.”  So not enough people in this cabinet care about global warming.  What do you say about that, Mr. Baker? 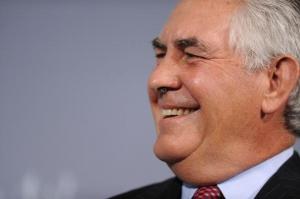 Now, I don’t like that at all.  A carbon tax, for example, that was one of Bill Clinton’s first attempted tax increases in 1993, and it went down in flames as it should.  A carbon tax can bankrupt people.  Carbon is in everything.  To put brakes on the economy, start taxing carbon.  The thing I don’t know, ’cause I don’t know Rex Tillerson.  All I know is I like Tillerson and I like his name.  I think Tillerson’s a perfect name.  Rex Tillerson, great name for a CEO of an oil company.  But I don’t know him.

So it could well be that Rex Tillerson is saying these things because it’s an insurance policy.  Got nothing to lose by saying it except maybe to keep the — it’s like a rich guy, it’s like Gates, it’s like Warren Buffett being for tax increases on the rich.  It’ll keep the people with pitchforks away from their house.  “Yeah, he’s a good rich guy, he thinks he’s not paying enough in taxes.”

So if Rex Tillerson says, “Yeah, we in corporate America, we’re not doing enough to save the planet,” that keeps people at bay, but he also might mean it.  It is at variance with what Trump believes, by the way.  Trump does not believe in a carbon tax or any of that, but he loves Tillerson, from what I understand.  He didn’t know Tillerson before they met.  Tillerson bowled him over.  I mean, really impressed him, ’cause they both do deals.  So we’ll have to see.  But this is a bit of a red flag for me, anything getting close to this is a red flag.