RUSH: Here’s Aaron in Washington, Illinois.  Great to have you on the program, sir.  How are you doing?

CALLER:  I’m doing great.  Thanks so much for taking my call.

CALLER:  It’s truly an honor.  I want to make a quick point.  I’m looking at the world; I’ve never seen it like this before.  And I think there’s been a revival and an awakening on both sides, on the right and the left.  And on the right, we’ve realized, we don’t need the left.  Capitalists don’t need socialists.  But what’s scary is everybody on the left had an awakening also, and they realized that they do need us. The mask has dropped and they realize that they’re irrelevant.  They’re inconsequential.  They couldn’t survive without the hard work of everybody on the right.

RUSH:  You think they figured that out?

CALLER:  I think that’s why they’re… I think they know they’re drowning.

RUSH:  Look, this is an intriguing concept.  Let me go back to the very beginning of this, because you think… I just want to restate this.  You tell me if I understood you correctly.  You think it’s been a real awakening on both sides where those of us on the right have realized we don’t need them.

RUSH: They need somebody producing the things that they’re gonna take from people to give away.  Is that your basic theory?

CALLER:  Well, let me go one step further.  If there was a reality TV the show, you put a group from the right and a group from the left on an island with some bare supplies. Everybody on the left dies.  They have no life skills whatsoever to make it, and they’ve realized that.  They have lived as leeches —

RUSH:  Okay, wait. Let’s stop right there.  Hold it.  Hold it.  I want to bring your example to life.  We’ve got two reality shows.  We got a bunch of conservatives on an island and they know self-reliance and they know production, and they know the idea of incentive as motivation.  On the other reality show, you have a bunch of liberals on an island, and there’s no golden goose there. There’s nobody out producing wealth. There’s nobody creating anything that can be taxed or transferred.  There’s nothing that can be redistributed.  As such, they don’t know how to go out and produce, because they have not done so.

CALLER:  We’ve seen it again in every system that’s tried —

RUSH: No, no, no!  That actual show.  We have seen that show.  I’m gonna get in trouble here, folks.

CALLER:  I’m not aware of that.

CALLER:  That’s true.  You had people that were willing to sit there, waiting for someone to rescue them.

RUSH: Wait a minute, now.  What evidence do you have that they’ve realized?  I don’t see that.

RUSH:  Wait a minute, though.

RUSH:  If you were correct, and if they had seen the light, and if they realized they couldn’t get along without us, there would be some gratitude.  And there isn’t!  There is more hatred — insane, ludicrous, unhinged hatred — for us than ever before.  There’s no appreciation for us.

CALLER:  I will concede that point.  But I also concede that an awful lot of people that I work with on a day-to-day basis — whether they’re in trade unions or in manufacturing — have all come around.  Not one of them voted Hillary, and they all voted for Obama, and these are guys going back four generation of being Democrats —

CALLER:   — and they said enough is enough.

RUSH:  Right, right.  Okay.  So you’ve got what is called anecdotal evidence.  You’ve got some people you know who are being a little bit more understanding.  I’m here to tell you — and I respectfully disagree here — that I think on balance nationwide there isn’t any acknowledgment from anybody on the left that we are worth even being alive.  I think there’s more abject hatred and division and discord, unhinged special kind of stupidity than I’ve ever seen in my life.  You know, the other version of your story that we’ve seen is the Pilgrims.  Your reality show, we’ve seen it.  We’ve seen it repeated day in and day out if we want to look at it the way you did.  Okay, look, I’m out of time —

CALLER:  Rush, believe it or not I’ve shared that story with my kids and I believe I heard it from you. I’ve been listening to you for a long time, and when they tried socialism, they starved to death and when they had private property, they flourished.

RUSH:  Well, some of them starved.  And they didn’t produce nearly as much. There wasn’t any incentive.  There were a bunch of people that figured out — the Pilgrims figured out — that they could sit on their ass all day because other members of the camp were out producing. Because everything got put into a common store, everything produced. And so whether they produced or not, they got a share of it.

And it didn’t work because what happened, is resentment set in among the people that were doing the work and doing the producing.  And William Bradford’s journal is very clear about this.  They scrapped that and they essentially set up a system of market capitalism.  And that’s when they began to prosper, and that led to the first Thanksgiving, thanking God for all of that.  And you’re right. You did hear it here because it’s not taught anywhere else, or wasn’t.  Now, iPhone, 7 or 7 Plus?  Which do you prefer? 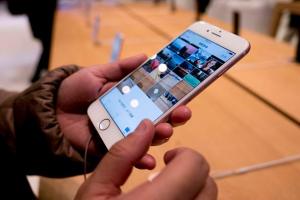 RUSH:  It was on the Fritz out of the box.  She just didn’t know it.

RUSH:  And she likes it.

RUSH:  Okay, then you want the Plus.  Who’s your carrier?

CALLER:  Well, that’s the other thing.  She switched her and the kids over to Straight Talk, so I’m not sure what the carrier is.  It’s just you pay-as-you-go.

RUSH:  Okay, I think I’ll be able to accommodate that.  I think I got one rose gold left.  If not. I’ll go gold but hang on just a second here, Mr. Snerdley will get your address and we’ll get the phone out to you.  You’ll have it tomorrow if you have a FedEx address that’s good.