RUSH: You remember this idiot, this so-called Republican elector — I gotta rein this in.  I’m gonna lose control here if I don’t watch myself.  This elector from Texas, Chris Suprun.  Oh, what a valorous guy.  What a man.  This was a Republican elector, and the Drive-Bys found him and the New York Times, which, by the way, is shutting down eight floors of their business.  Yeah, the business is so good. They’re lying about all of these massive new subscriptions they got after the election. They’re shutting down eight floors and renting them in order to come up with operating revenue.  The New York Times, the leaders of the alt-left.At any rate, they gave this guy at the New York Times an op-ed space to write a column about how he couldn’t in deepest conscience and he couldn’t in good faith as an elector in the Republican Party, he could not bring himself to vote for Donald Trump.  No way, Donald Trump was scurrilous, Donald Trump was dirty, Donald Trump filthy, Donald Trump illegitimate.  And this guy, Chris Suprun was celebrated all over the alt-left, celebrated all over the lunatic fringe insane asylum known as the Democrat Party. 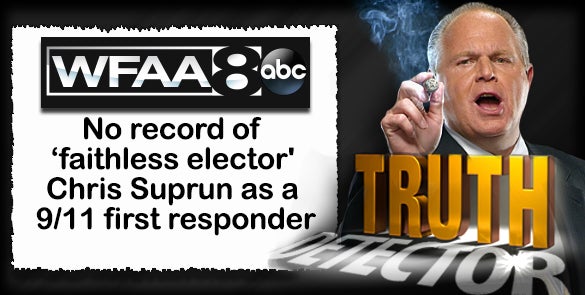 Well, it turns out the guy’s a total fraud!  He is not a 9/11 responder.  He’s not anything that he claims to be.  And we have this from the ABC affiliate, WFAA in Dallas.  And, believe me, I’m sure they don’t like reporting this.

“The Republican elector who has gotten national attention for refusing to vote for Donald Trump at the Electoral College on Dec. 19 was apparently not a first responder on September 11, 2001 as he has stated for years and has a questionable career history, according to an investigation by WFAA.

Chris Suprun, 42, portrays himself as a heroic firefighter who was among the first on the scene after the third plane flew into the Pentagon on 9/11. In a heavily-publicized editorial this month for the New York Times, Suprun stated that as a member of the Electoral College he will not cast his ballot for Trump because the president-elect ‘shows daily he is not qualified for the office.’

“Suprun, a Dallas resident for more than a decade, even used his résumé to establish credibility in the Times piece, writing in the second paragraph: ‘Fifteen years ago, as a firefighter, I was part of the response to the Sept. 11 attacks against our nation.’  He has founded a nonprofit called Never Forget and state records show he is a licensed paramedic — but much of the rest of résumé, publicly available on LinkedIn, is questionable.

“In addition, on at least two occasions over the last couple years at crowded Major League Baseball games, Suprun has been introduced as a 9/11 veteran before throwing out first pitches.” And he is not one.

He is a total fraud.  There is a video of Suprun doing this.  He’s wearing a fire department uniform even though he has not been employed by any fire department for years, according to the story at WFAA.

“‘He claimed to be a first responder with the Manassas Park [Virginia] Fire Department on September 11, 2001 and personally told us stories “I was fighting fire that day at the Pentagon. No, I was on a medic unit that day at the Pentagon,” and you make a phone call to Manassas Park and you find out that he wasn’t even employed there until October 2001,’ said a first responder who knows Suprun and only agreed to speak about him if his identity was concealed.

“The City of Manassas Park confirmed to WFAA that it hired Suprun on October 10, 2001, one month after the 9/11 attacks. The fire chief there added that his department never even responded to the Pentagon or any of the 9/11 sites. ‘It’s no different than stolen valor for the military; dressing up and saying “Hey, I earned a Purple Heart” when you weren’t even in combat. There’s a big difference between shopping at Old Navy and being a Navy SEAL,’ said the first responder who knows him.

“But Suprun’s résumé raises even more questions. It shows he was, at the time this story aired on WFAA, a paramedic with Air Methods air ambulance service. But Christina Brodsly, a spokeswoman for that company, said he is not an employee there.  Suprun also claims to currently be a paramedic with Freedom EMS in Dallas.

“But records from the Texas Department of State Health Services indicate there’s no such company. A firm with that name used to exist in Houston, but it went out of business in 2008, according to DSHS. Turns out, federal court records show Suprun has spent the last five years in bankruptcy while his résumé says –”  This guy’s probably not even a Republican!  Well, there’s no question he’s not.  He’s a fraud.

“He even collected unemployment during part of it, court records show. Suprun was just released from bankruptcy supervision this month. He never responded to multiple emails from WFAA and calls to his telephone go to a recording which says his voicemail is full.”

And get this.  Here’s the piece de resistance.  “Two public relations firms he has hired … responded to our requests for an interview saying: ‘Suprun’s schedule is jammed packed.'”  The first PR firm that this Republican elector hired is Megaphone Strategies.  You know whose that is?  Van Jones.  Well-known communist, commentator on CNN, disgraced former member of the Obama administration.  Well, he’s not disgraced.  There’s no such thing as a disgraced leftist.  There’s just caught leftists and leftists that haven’t been caught being the frauds that they are.

So this Republican elector makes up all of this heroic resume enhancement, wasn’t any kind of a first responder, certainly not at the Pentagon after 9/11, claims he’s worked at all these different — this is one of these guys that sits around in his basement and has a thing for first responders. He thinks they’re heroes, wants to be a hero, and he fantasizes about being one so he creates a resume and a LinkedIn page, makes it all up. 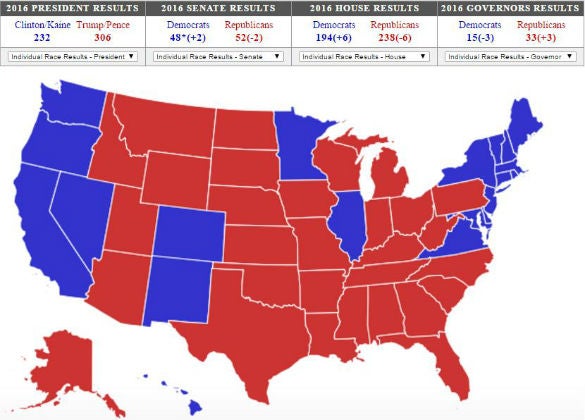 I don’t know how he ended up as a Republican elector, but when the excrement storm started to hit the fan the guy goes out and hires Van Jones’s public relations firm to manage this whole story.

Let’s see.  “Fenton Communications has…” That’s the other PR firm. They have done work, they’ve done public relations work for Marxist dictators and Cindy Sheehan.  So these are the two PR firms the guy has hired to sort of navigate the storm here.  “His story raises a bigger question, though. How are presidential electors chosen? And more importantly, aren’t they vetted? Unfortunately, not. They are selected in an almost informal process that each party undertakes at their state convention.”