Trump Displays His Humility in Hershey, As Hillary Holds Pity Party at the Plaza


RUSH: The fact they lost to Trump, they just they just can’t abide it, they can’t figure it out, they can’t make sense of it, because they can’t come to grips with the fact that they had one of the worst candidates in the history of presidential candidates as their nominee.

You know, do you realize how silly it was, Obama there at the Democrat National Convention and he tells the audience, looking right at Bill Clinton, he said (imitating Obama), “Bill, you know what?  I gotta be honest, Bill, she’s more qualified than either of us.  She’s far more qualified than you, Bill, and I gotta say never, ever anybody more qualified, even than me.”  And everybody’s looking, saying, “You’re saying that is the forever most qualified person?”  They became a laughingstock at that moment.

Last night Hillary had her party, whatever it was, at the Plaza Hotel.  This is a classic, too, folks.  The U.K. Daily Mail has pictures of Hillary arriving.  She’s in one of these giant vans that also doubles as a hearse in foreign countries.  One of these giant Mercedes vans that’s very high and not very wide and they stack coffins in these things in Europe.  Hillary’s in there and she’s wearing black, and the driver is wearing black, and she literally looks as depressed as I have ever seen anybody. They’re driving into the loading dock area of the Plaza Hotel in New York.

You want to talk about foreign influence on elections, by the way, the Russians hacking all this.  How about all the foreign governments and the foreign individuals who were prepared to own the U.S. presidency had Hillary been elected?  Foreign influence?  You want to talk about foreign influence?  We’re gonna get into the hacking story as the program unfolds because what we’re learning now is nobody can conclusively say the Russians did it, not even John Kerry will say so.  Jeh Johnson in the Regime will not say so.

The Wall Street Journal has a story out today that illustrates the actual conflict between what the CIA has been saying and what other people have learned.  And I’m gonna spell this out for you.  It’s complex, and there’s nobody better than me at making the complex understandable.  So that’s coming up on the program today.  But everybody worried about it.  And that’s it, there aren’t that many people worried.  That’s the whole thing.

That’s another aspect of this.  The Drive-Bys get going on this and they make it look like everybody is really worried now that Trump won.  Oh, my God, the Russians elected Trump.  Oh, my God.  No, that’s not what the majority of people in this country are thinking.  The majority of the American people are looking at the New York Times and the Drive-By Media and Hillary Clinton and the Democrats and they’re ignoring them now!

The media’s finished.  The media’s over.  It’s become too bifurcated.  They’ve lost their credibility, I mean, conclusively in expanding numbers of minds across the country.  They haven’t had any credibility with me for decades, folks.  It’s self-inflicted damage, and it’s continuing.

Anyway, back to this big bash at the Plaza Hotel.  Not every Hillary donor was invited.  Only the super donors, the people who bundled and the people who donated X-amount were there.  Only the really big of the big were there.  But Hillary didn’t pay for it.  The Clintons never use their own money.  They used donor money.  This is a party that Hillary threw, and the guests actually paid for it, which, if you think about it, is typical of the class or lack of it exhibited daily by Democrats and liberals and leftists and these entitled phonies like the Clintons.

But nobody had a good time.  It was misery after misery after misery because they’re all in there trying to figure out what went wrong.  There were long faces.  There wasn’t anything to celebrate.  Hillary’s gratitude is insincere at best.  Everybody knew it was a phony thank-you and it was more about building a base to whatever future operations there may be than actually expressing gratitude.

Meanwhile, up in Pennsylvania or down in Pennsylvania Donald Trump is addressing thousands, tens of thousands of people in Hershey, Pennsylvania.  I mentioned to you a Republican operative was sending me emails last night just marveling at Trump’s performance.  He uses the word like “genius.”  And I wrote back after the rally was over, I said, “Did you notice what just happened here?”  And the operative wrote back, “What do you mean?”

I said, “Something everybody in that room saw, something every Trump voter watching this saw, and they’ve always seen it, but nobody in the political class has yet seen it.  And if you told them that it happened, they wouldn’t believe you, think you’re nuts.”

So the operative reads that and writes back, “Well, what are you talking about?  Don’t keep teasing.”

I said, “Did you see all the humility in the room?”

He keeps going through this, shaming the media as he goes because before this he sets it all up as them saying there’s no way Trump can win any of these states as the night begins, and then as each state comes in Trump wins, and he’s in Pennsylvania so he spends all this time talking about how it took ’em so long to report Pennsylvania, even though 99% of the votes were in. 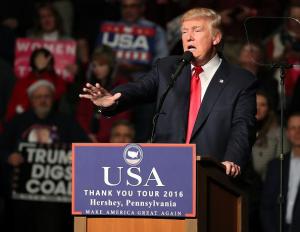 There is humility to Donald Trump that I guarantee you if anybody in the media is listening to me right now, they think I’ve lost my mind. “Donald Trump, humble? You’re crazy! Donald Trump?  Donald Trump’s the biggest egoist, he’s the biggest phony, he’s the biggest self-focused… He’s a narcissist.” Nope. Donald Trump, he’s humble.  And everybody at Hershey Pennsylvania in that hall last night, they saw it, and they responded to it, and it’s part of what makes the bond between Trump and his voters unbreakable.  And it’s in every one of these rallies, and it has been since Trump began doing ’em.

It’s a never-ending agenda.  It’s a big agenda, and he touches on it at every one of these rallies, and people believe him and they applaud and they can’t wait to get started.  At the Plaza Hotel, Hillary Clinton doesn’t even want to be there.  And her donors, if truth be told, are angry.  And if truth be further told, Democrat donors, they want an autopsy.  They want to know what the hell was done with their money.  They want to know how in the hell, with all of that money, Hillary Clinton still managed to lose an Electoral College landslide.

You’ve never questioned how your money was used as long as they won.

But now here comes this gob-smack defeat, and these donors want to know what happened, and I guarantee you, they’re not the only ones.  A bunch of people that donated to the Clinton Crime Family Foundation — all these foreign donors, all these foreign governments investing in what they thought was a guaranteed Clinton presidency — what do they do? What do they get?  Their money is literally worthless!  How do they get it back?  What do they get in return for it?  Hillary Clinton, Bill Clinton, and the Democrat Party is in such deep doo-doo, they don’t even know how deep yet.

RUSH: This is Mrs. Clinton at her party.  This is her party last night, the Plaza Hotel, to thank all of her big donors.  Listen to the self-absorption.  Listen to the utter denial this woman is living in.

HILLARY:  Vladimir Putin himself directed the covert cyber attacks against our electoral system, against our democracy, apparently because he has a personal beef against me.  Putin publicly blamed me for the outpouring of outrage by his own people.  And that is the direct line between what he said back then and what he did in this election.  This is not just an attack against me and my campaign, although that may have added fuel to it.  This is an attack against our country.  We are well beyond normal political concerns here.  This is about the integrity of our democracy and the security of our nation.

RUSH:  This is the woman who said Trump posed a great threat because he would not accept the results of the election, and here’s this woman now occupying that position.  The whole point of this, she’s totally self-absorbed. See, now, Putin was attacking her personally, it’s even worse than we thought. Putin has it in for her personally, denied her the presidency, and that means she was really entitled to it. She was gonna win.