What Would Jesus Do? The Pope Says He’d Be a Syrian Islamist Migrant

RUSH: Look at this.  Slate.com: “Donald Trump Is Trying to Take Ownership of the Phrase ‘Merry Christmas’ — Donald Trump spoke at a rally earlier this week, and the front of the podium was a big red sign that said, ‘Merry Christmas, USA.'”  It only stands to reason that a bunch of secular wacko leftists would be offended by this. 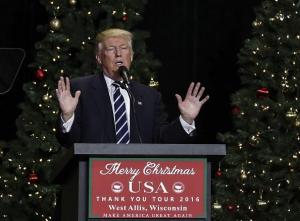 And he says (this is the end of this little Slate piece), “Truly, it’s what a Middle Eastern Jew who was born in a barn because no one else would take his parents in would have wanted.”

RUSH: It’s a website called JihadWatch.org.  This is the headline: “Pope: Christmas Reminds Us That Jesus Was a Migrant.”  It wasn’t very long that Jesus was homeless. Well, his parents were homeless.

They have all become unhinged, unable to accept it, unable to deal with losing the election.