An Uneasy Truce with the Establishment


RUSH: Let me grab another equal quickly.  Medina, Ohio.  David, glad you waited.  You’re next on the EIB Network.  Hello.

CALLER:  Hi, Mr. Limbaugh.  It’s a real pleasure to get to talk to you.  My dad and I have been listening for a long time, and I actually met you in 1994 during a commercial break when I attended a taping of your TV show. 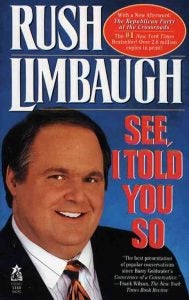 RUSH:  Well, thank you.  I appreciate your saying that.  A lot of people do, and I’m very appreciative.

CALLER:  Well, my question is, I noticed that when Tillerson was announced to be the secretary of state and not Romney, that the Trump campaign announced that Romney’s niece would become the chairman of the Republican Party, and I wondered, do you think Romney has been neutralized by this?  And was it a coincidence?  Or do you think that maybe Romney should be appointed, say, ambassador to France, given his, like, French background and —

RUSH:  (laughing) What do you think, that Romney’s still a threat that Trump needs to send to Outer Slobovia or something?

CALLER:  Well, I was just wondering what you think, and I see that the Dallas paper says that Tillerson brings the Trump and the Bush worlds together, too, so maybe they have been neutralized, too, so what do you think?

RUSH:  I think you’ve gotta ignore all of that.  Brings the Trump and the Bush worlds together?  Rex Tillerson just because George W. Bush thinks it’s a good choice?  Let me tell you exactly what’s going on here.  Mitt Romney in his private moments still despises Donald Trump as much as he ever has.  Nothing’s changed.  Everybody in Washington still despises Donald Trump as much as they ever have, Republican and Democrat.  And they’re just waiting, and they’re all mouthing platitudes, what a great guy, what exciting times these are, but they can’t wait for the guy to fail.

They think it’s inevitable ’cause he doesn’t know what he’s doing. They’re the professional politicians, they’re the establishment types, and he’s not, and he’s gonna embarrass himself.  They’re still waiting for him to implode.  He was gonna do that in the campaign but it didn’t happen, but it’s still gonna happen.

They don’t like Trump.  Trump winning, if anything, has deepened the animosity. It has not converted all these people to Trump friends and Trump fans.  Some of them are natural suck-up artists and sycophants so they’ll do whatever they can to get in close and get in tight because some of them without Trump have no future in the establishment or in government.  And so there will be people, not naming names here, who will attempt to make it look like they are now on board and full-fledged supporters.

But Trump winning, human nature is, oh, my God.  People that hated Trump, despise Trump, and they were legion, I mean, in the political establishment.  Just because he wins, it doesn’t mean all that’s out the window and there’s a newfound love and respect.  Like when Reagan won.  He was deeply resented by the Republican establishment all eight years.  But the longer he was in office and the more successful he was, the greater benefit to them, so they had to really bite their tongues.

The same thing will happen with Trump.  If he succeeds, they’re gonna continue to be silenced, but the moment they think Trump is slipping, they’re all gonna pounce, whether he sends Romney to Outer Slobovia or back to Boston, doesn’t matter where Romney is, there are airplanes.  You can get on a plane and pick up the pieces of a broken Trump administration from anywhere in the world inside of a half hour.

The lobbyists are just part of that group of people that can’t stand the guy.  Trump has gotten this not having to reward hardly anybody.  He not have to pay very many people back at all with any kind of patronage.  It’s a big deal.  Oh, that last caller took a SIM-free gold iPhone 7 Plus.  He said that his carrier sucks and he wants to change and he doesn’t know which one so he took a SIM-free, unlocked iPhone 7 Plus gold. I was long, I didn’t have a chance to ask him on the air, but Snerdley took care of it.