The Legacy of Saint Hillary


RUSH: Here is Ben in St. Michael, Michigan.  Welcome, sir.  Great to have you on the program.

CALLER: (garbled cell) Hi, Rush.  It’s an honor and a pleasure to speak with you.  I’ll get right to it.  My question is, what do you think is gonna be the legacy for Hillary Clinton, and I’ll give you my thoughts first.  I’d like to hear what you think.  I think she’s gonna play the typical card of the victim, in whatever situation that fits for her legacy.

CALLER:  Yeah, I will wait to see.  I know she’s gonna play the victim. You know, it’s a glass ceiling that was never broken. It was the Russians like you’ve been saying that have a part in everything, so it just seems like she’s gonna keep playing the victim card.

RUSH: The second time she was a victim of identity theft and hacking by a foreign government working with the director of the FBI to sabotage her campaign.  And then there will be some derisive comments of Trump.  But overall, her legacy is going to be one of the most sacrificing, one of the most selfless, one of the smartest, one of the most accomplished, one of the most caring people ever to walk the planet, with a list: She braved sniper fire in Afghanistan to try to bring peace!

She worked hard in Libya, overthrowing a teapot tinhorn dictator in the effort to bring peace, sacrificing an ambassador even for the effort of making the Middle East a peaceful place. Mrs. Hillary Clinton devoted her life to people and peace.  I can write this now and I can be damn close to what it’s gonna end up being.  And I guarantee you if you see it you’re gonna throw up.  They will not do the victim card.  Hmm?

RUSH: (interruption) How do they they handle Bill?  Well, I guarantee you that in legacy writing, Hillary’s gonna end up on a higher grade than Bill is, because Hillary is going to get credit for saving her husband’s administration with her loyalty and her effort to discredit these evil Republican women who popped out of everywhere claiming that Bill had banged ’em.  She’s… I mean, she’s gonna be a saint by the time they finish with this, and Bill’s gonna be the guy who was a good president and he really cared.

But, you know, he just couldn’t keep it in his pants.  And they tried as hard as they could to get a zipper that wouldn’t open, but nobody could invent one.  But Hillary, she did her best to keep the family together, keep the country together.  If it hadn’t been for her, who knows?  I can just see all this now.  Clinton’s gonna be… He’ll have a great legacy, but it won’t match Hillary’s.  Okay.  Before I go, but before I do it’s your turn now to choose a iPhone 7 or iPhone 7 Plus.

CALLER:  My carrier is Verizon, but doesn’t matter if I get a SIM-free or a Verizon one?

RUSH:  You can?  What color do you want? 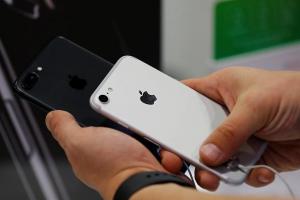 RUSH:  That be gold on the back.  It’s a perfectly… Look, they’re all the same on the inside.

RUSH:  I mean, email and surfing and messaging, it all looks the same no matter what color the phone is, but if you want a white one, gold. If you want SIM-free Verizon, it’s gonna be… It’s gonna be a gold one.  I’m out of silver.  So worry now back to jet black being the best looking iPhone 7 Plus, folks.  And, by the way, for those of you today and Thursday or Friday, the iPhone 7… I don’t want you people to make the mistake of not getting what you want because you’re trying to, “Well, of course she has a silver 7 Plus, that must be the…”

They’re all the same, and you should choose the one that you really, really want.  We’re getting… I’m not gonna run out of supply, but it I’m running out of the colors, ’cause, frankly, I stocked up on black.  That was the hot color until I happened to mention that one of mine is silver, then a run on silver began.  So don’t worry. Everybody today, tomorrow, and Friday will get whatever style or whatever color — not color, but whether you tell me a Plus or regular one.  So hang on out there so Mr. Snerdley can get your address we get this out to you.