The GOP Battle Over Obamacare

RUSH: There’s another story out there today that doesn’t have any legs yet, but I’m telling you, if this gets a wide berth, it’s gonna cause all kinds of problems.  “GOP Considers Holding Off on Repealing Obamacare Taxes.”  Why?  Doesn’t make any sense here.  Repealing Obamacare is repealing Obamacare, and the taxes are a big part of it.  The story’s at TheHill.com.

“Congressional Republicans are considering holding off on repealing some of Obamacare’s taxes, according to lobbyists familiar with the discussions.”

Lobbyists?  What do lobbyists have to do with this?  See where I’m going with this?  This isn’t Trump.

“GOP lawmakers on the House Ways and Means Committee discussed the possibility of keeping some of the taxes in place during a retreat last week at the Library of Congress, the sources say. Even if some of the taxes are not removed as part of the initial repeal bill, it does not necessarily mean they will remain indefinitely. Some Obamacare taxes could be dealt with as part of a larger tax reform bill later in the year.”

Now, again the first thing that we have to say is this may not be true at all.  It may be totally fake news.  Nothing’s changed where the media is concerned.  The media will continue to do everything it can to separate Trump supporters from Trump and Republican supporters from Republicans.  The media will do everything it can, in other words, to undermine this election, the transition, and the Trump administration.  So when you hear stories like this or see it, the first reaction has to be, especially when it doesn’t make any sense, “What?  Is there a name?  Is there somebody quoted?”  No, there’s nobody quoted.

So here we have a story at TheHill.com: According to lobbyists, congressional Republicans are considering holding off on repealing some of Obamacare’s taxes.  That doesn’t make sense with what this campaign was about.  It doesn’t jibe with what Trump made clear that one of his objectives is.

Now, about repealing Obamacare.  I mentioned this a couple times, and it might be worthwhile to throw it out there again at this point.  There is a miniature battle going on within the Republican Party on Capitol Hill about just how to repeal Obamacare and then what do you do next.  There are two versions going around of what is on the table.  Repeal Obamacare going to happen.  That is supposedly a given.  The replacement is where all of the question marks are.

Now, there are stories out there that the Republicans don’t have a replacement plan yet, that in all of this time spent as the minority, while Obama implemented Obamacare and while the Republicans were out opposing it and promising to repeal it if they ever got a chance, we’re led to believe that in all of these past five years, let’s say, there hasn’t been a single Republican sit down and write a replacement piece of legislation.  Paul Ryan says there is, they’ve got one, but nobody knows what it is, and that’s an off-the-record comment that has been shared with me.

So the two-year implementation of a replacement or three-year is purely political, and it comes down to the midterm elections in 2018.  Right now the Democrats have a slew of seats in the Senate that they have to defend.  I think it’s like 25 seats.  They have 25 seats up for grabs, and it’s not looking good obviously based on the election results last November.  So among these 25 Democrats, there are seven or eight that are really vulnerable, because they’re in red states.  They’re in states that Trump won.

So the argument for waiting for three years to replace Obamacare is you wait ’til after the midterms where it’s possible the Republicans could literally have 60 to 62 seats in the Senate.  And if the Republicans ever got to 60 or 62 seats in the Senate, then they own it, and there’s nothing the Democrats can do to stop it, filibuster, you name it, as long as whoever run — Mitch McConnell keep all 60 together, and they’re thinking this is possible.

So those are the arguments taking place.  And it’s amidst all that that this story hits in the Hill: “GOP Considers Holding Off on Repealing Obamacare Taxes.”  And I’m just here to tell you, the wise thing to do, based on the source being quoted here as lobbyists, the wise thing to do is punt and don’t get suckered into this.  They want you thinking the Republicans are gonna sell you out, folks.  I know, I know, Republicans have in the past.  There’s a different equalizer, however, here, and that’s Trump.

And right now people on Capitol Hill, whether they like it or not — and they don’t like it, trust me — are gonna go along with Trump.  He clearly has the mandate on the Republican side.  He clearly is the reason they all won.  He is the reason.  I mean, folks, don’t forget, a month out, Paul Ryan gave up on Trump.  Paul Ryan was out saying, “I’m focusing on maintaining as many seats in the House as I can.”  A month out you had Republican officialdom thinking Trump was gonna lose, and they were in self-protection mode.  They are where they are because of Donald Trump, and they know it.

So what Trump wants to do in Obamacare is what’s gonna happen.  But see right now we’re in the transition, so all these people are out there jockeying and trying to say things that are making Trump supporters nervous and we just need to be patient.

RUSH: Here’s Alex in Huma, Arizona.  Welcome to the program.  You know some of the best city names in the world are in Arizona.

RUSH:  You got Winslow, Arizona; you got Show Low, Arizona; and now Huma, of all places, Huma, Arizona.  That’s great!

RUSH:  That’s okay.  I can live and dream that it’s Huma.

CALLER:  That’s all right.  Absolutely.  So Rush, here’s the question that I had for you.  You know, we’re a single-income family, we homeschool our kids by choice, and my insurance rates are going up like $2,400 next year. And in light of what we have now and now we have Congress, we have the House, Senate and the White House, I can’t help but think back of the two years of Bush 43 where we had all three and got nothing done.  So what do you think is different?

RUSH:  Let me understand the essence of your question, the nature of your question.  Are you suggesting or is it in your mind that everybody’s excited here and really shouldn’t be because we’ve already been here before and nothing got done, Republicans had the House, Republicans had the Senate when George Bush was in the White House and we didn’t get anything done, and so you’re asking what’s different, what’s gonna make it different this time?

CALLER:  Yeah.  I’m not saying that Trump is Bush at all, and I’m cautiously optimistic that he will be different, but my question is, where’s I guess the hope for us that Congress is gonna act differently now that they have control.

RUSH:  Right now the answer’s Trump, and that’s it, that’s the only answer.

CALLER:  Well, I hope that — I really — like I say, I’m cautiously optimistic, and I’ve been down here working on the border for 25 years, and nothing seems to really change no matter who is in charge.

CALLER:  It makes me, I guess one of the things that makes me mad is, you know, we’re here, our insurance rates are going up and now we hear this story, like you said, it might be true, might not be, that Congress is thinking about, oh, maybe holding off on Obamacare.

RUSH:  Well, there’s so much going around about that.  I’ve even done something, I’ve actually called some people about it.  The three things going around about Obamacare are this, that we’re gonna repeal it, everybody agrees, we’re gonna repeal it but that doesn’t mean anything ’cause we’re not gonna replace it for either two years or three years. Or, I’ve also been tols, “No, no, no, Rush we have a replacement. I can’t tell you what’s in it, but we got a replacement ready to go.”  And now we have the story today that’s in TheHill.com that I think is traced back to Washington Post that Republicans are now saying that they might not eliminate the taxes in Obamacare with the repeal immediately. 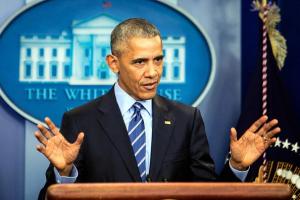 There’s a lot of people that are still ticked even on the so-called Republican side that Trump won.  So I think we’re just going to have to wait.  And do keep in mind that anything in the media that makes you feel like you have been sold out is designed to make you feel that way, and distrust it.  Wait until it happens.  Don’t get all fatalistic unnecessarily.  The wild card here is Trump.  The great unknown and the something that we haven’t had before is Trump.  The Republicans we know are reluctant to make any big changes because they’re just the Republicans.

But Trump doesn’t care.  Trump is all about big changes and getting things done.  And right now the Republicans owe the fact that they won the House and Senate to Donald Trump.  They keep talking about his first 200 days.  That’s the length of time I think people think that he’s got to really come in and make his mark, because at some point, it happens to every president, members of the House and Senate separate a bit, start getting protective, self-interested.

It’s crucial for Trump to keep this relationship with his supporters.  If he keeps doing these rallies, if he keeps going out on these thank-you tours, if he keeps demonstrating that he’s got the American people with him, that’s the greatest bit of ammunition he’s got to make sure people in Congress follow along with him ’cause that’s the people, they are the voters, and they are the reason the Republicans even won the seats that they won, and Trump.

I’m not pessimistic about this stuff yet.  I have been in the past, but this is an opportunity for something that we haven’t seen in a while, like you said, and I’m waiting patiently for it all to shape out.  This next month is gonna be very, very fraught with potential danger, and every effort’s gonna be made to depress you and anger you and make you think it’s just gonna be the same old same old again.  I would caution to you fight that instinct every time it overcomes you.