RUSH: The World Bank Group… This another left-wing bunch like the IMF, the World Bank, the State Bank. How many of these damn World Banks do we have, what do they do, and where do they get their money? (interruption) What are you frowning at me for? (interruption) Where do you think they get it? Where does anybody in the world get their money? Us! And what do they do with it? They pass it around. They supposedly make loans with it. It’s one… This World Bank stuff…

The thing I know about the World Bank is that whoever runs it has 25 different homes; the lead home is usually somewhere there’s a ski lodge. They’re definitely gonna have a home in the Hamptons. They’re gazillionaires! Anyway, “President-elect Donald Trump’s proposals to cut taxes on corporations and personal income will boost economic growth, according to a new report from the World Bank Group. Trump has proposed cutting the corporate tax rate from its current level of 35% to 15%, with the intention of bringing jobs back to the United States. 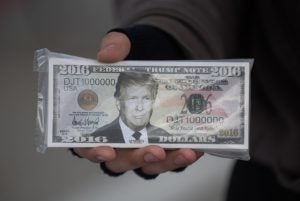 “The World Bank Group estimates that this cut alone would boost U.S. gross domestic product growth by roughly 0.9 to 1.3 percentage points over eight quarters.” You know what I’m noticing here, folks? It is stunning to me. Let’s go back. Before the election, corporate America was lining up with Hillary Clinton — the banks, the automobile companies, Silicon Valley, you name it. Trump wins the election, and the same people can’t wait to sidle up to him! They can’t wait, and they actively campaigned against him.

Now, I’ve done this long enough to remember — and it’s not that long ago — where corporate CEOs were really private sector entrepreneur believers, and they thought the best thing government could do was get out of everybody’s way. Not that long ago. But now that is not the case, because cronyism has been introduced. And now various CEOs and corporate leaders have figured out that actually it’s more helpful to have a crony relationship with people in power, because then they have access to federal funds instead of having to use their own.

It’s a way to get favors that their competitors don’t — and it’s distorted, I can’t tell you how much. And I could never understand why people… It took me awhile to figure this out, ’cause I believe that ideologically driven people are ideologically driven people for a reason and are not (sigh) malleable, and I found these guys were. I thought, “Once you believed that Big Government’s a problem, you believe Big Government was a problem,” and it used to be the case. But now all these guys or many of them are sidling up to government, using government, becoming friends and associates with people in power.

And that’s what’s happened here. I’m amazed at all… Like the World Bank, before the election, wanted nothing to do with Trump! Now that Trump has won, they’re out there actually telling the truth about Trump’s policies. But they did nothing but try to undermine his election. So here’s the World Bank — who knows full well before the election that, if Trump wins, it means good things economically, and yet to the extent that they got involved it was anti-Trump. And you could see that about any number of others, CEOs and companies, corporations, or what have you.

Look at all of the CEOs and the banks and you name it that were just donating — giving money left and right — to the Clintons and their foundation and donating to her campaign. The way to say it is, I think there’s a lot more gutlessness out there than I ever dreamed there was, and now there is fear of Big Government. I made the mistake of assuming that all these people sidling up to government were doing so because they agreed, say, ideologically with Obama. That wasn’t it. They were scared to death of the guy, and it was more like a protection scheme to get close to him.

But, anyway, this World Bank is just one example. The World Bank is made up of total leftists who haven’t been fans of Republicans and conservatives for years, and yet here they are. Now, it could well be… Now, this is getting too in the woods. It could well be they don’t believe this. They’re putting this news out to set up Trump for failure. “Well, we expected Trump’s policies to cause growth around the world by 2%,” and then when it doesn’t happen, they go back and… But they’re not doing anything to cement their relationship. I don’t think they’re that far in the weeds. I think they actually think it’s gonna work!

And yet somebody running for office on the premise of reducing the corporate tax rate, they oppose! Then he wins, and all of a sudden they turn around and support him. I guess what I’m asking is, “Where were you when we needed you? Where was your honesty during the campaign?” And then there’s this from Roll Call. This is amazing, too: “Economy Was Top Issue Among Millennial Voters.”

Well, hell’s bells! Why didn’t we hear about that during the campaign? I mean, through the campaign what we heard about Millennials was they couldn’t have cared less! They cared about safe spaces. They cared about this and that, maybe they should live at home with their parents and health care. Anyway, I have more details on this that are fascinating, too, but I have to pause.

RUSH: Oh, the Millennial thing, the economy, just one little observation here on this story, the study, the economy, top issue among Millennial voters, you know what I bet that is?  I bet that’s student loans.  I think Millennials are quite understandably obsessed about student loans.  They’ve been screwed by ’em.  I mean, college education has been ruined from what it was intended to be. College education is now, for many graduates, an albatross.  It becomes yet another obstacle because of the debt that students incur in the process getting a degree.