When Liberals Lose, They Blame Democracy

RUSH: I don’t mean to be that redundant here, but Trump doesn’t have any kind of support system like a Democrat president has.

Obama had the media.

Bill Clinton had the media and whoever else.

But Trump only has his voters.

Trump does not have the media, other than some in the so-called conservative or alternative media. Trump only has his supporters. Most people, you elect the president — you elect him because he’s gonna implement his agenda — and you sit back and you watch it happen. ‘Cause you figure, after you voted, there’s not much more you can do. But Trump is gonna need his supporters backing him up, and the evidence of them being there is gonna be crucial to the media. Otherwise, the media is just waiting to run stories about how Trump’s lost his base. They can’t wait. I’m sure those stories are written. The only thing they have to plug in are the details like what state the people that are gonna supply the quotes live in.

But you know the stories are written, “Yeah, I voted for Trump, I love Trump, but I feel so let down now. I had no idea Trump was actually going to only let Christians in.” You know that quote’s already been manufactured waiting for somebody to agree to it. You know that story is written and others like it. And they’re just waiting.

Reuters has already tried. Reuters went out to the great Midwest to try to find people fed up with Trump, and they couldn’t yet, and they’re seething over it. They’re not happy. I’m looking for that story right now, and I have found it. Right here I have it in my formerly nicotine-stained fingers.

Here you go. “Trump’s Heartland Voters Shrug Off Global Uproar Over Immigration Ban — Many of President Donald Trump’s core political supporters had a simple message on Sunday for the fiercest opponents of his immigration ban: Calm down.”

Yeah, what monsters these Trump people are. Imagine having such an attitude. Reuters goes on to talk about how this is so obscene, so inappropriate, so unbelievable that people could still be sticking with Trump.

“In the St. Louis suburb of Manchester, Missouri, 72-year-old Jo Ann Tieken characterized the president as bringing reason into an overheated debate. ‘Somebody has to stand up, be the grown up and see what we can do better to check on people coming in,’ she said. ‘I’m all for everybody to stop and take a breath … Just give it a chance.’ … In the electoral strongholds for Trump, residents seemed nonplussed about the uproar –” Good for you! But Reuters is not happy, nor is anybody else in the Drive-Bys.

Now, I mentioned in the previous hour something you can look forward to as part of this. As you know, Trump won. But we are not a direct democracy. It isn’t gonna be — in fact, it has happened here, but our old buddy Nate Silver at FiveThirtyEight, Hillary wins the popular vote, loses the Electoral College, loses the presidency, therefore a majority of Electoral College state voters voted for Trump. Trump is doing what he said he was gonna do. Oh, have you seen the stories — and there are some out there — “We didn’t really think he was gonna do it. We never thought he was gonna do all this stuff.”

And a lot of people are playing off the famous Salena Zito analysis of Trump which said that Trump’s supporters take him seriously but not literally, and Trump’s opponents take him literally but not seriously, and people are now starting to say, “He meant it, he meant it, we knew he meant it. And he’s full of it, and these people that supported Trump, they’re full of it.” And so what they’re trying to say is Trump voters were fooled because they didn’t think Trump really meant it. They just liked the fact that Trump was fighting back, but now that Trump actually appears to mean it, do we have a constitutional crisis?

Because many people believe that we live in a democracy, and that means majority rules, which means a majority voted for Trump, not the popular vote, but the Electoral College winner, therefore Trump is doing what he said he was going to do. Expect a debate to surface along the lines of, “Hey, just because he said he was gonna do it and now just because he’s doing it, does it make it right? Are the people always right, or are the people wrong?” And they’ll use things like global warming. They’ll say nonscientists think that global warming doesn’t exist. Should they prevail or not?

And a reverse arrangement of that argument is about to surface. ‘Cause right here, Nate Silver, FiveThirtyEight, here’s the headline: “Trump Is Doing What He Said He’d Do.” The subhead: “Is that what his voters wanted?” It’s a very long piece devoted to the possibility that Trump’s voters didn’t bargain for this, not this executive order on banning all these people from the country. They didn’t bargain for this.

So it’s a way to undermine Trump, lied to his voters or — well, can’t say lied ’cause he’s doing what he said he was gonna do. So the story has to be that his voters really didn’t get it. And they really didn’t intend for him to do this. This is classic on the left, by the way. Trump says he’s gonna do A, B, C, and D, people like that and they vote for him to do A, B, C, D, and E. Trump gets elected, starts doing A, B, C, D, and E and the media says, “His voters didn’t expect him to do this.”

They just make it up. And it’s all part of this planned resistance. The fact the matter is, Trump had sometimes five rallies a day. At every one of these rallies he was very clear, exceptionally clear on his agenda, particularly when it came to immigration and national security. I think the people who voted for Trump knew specifically and exactly what he was gonna do and didn’t have a problem with it then and don’t now. 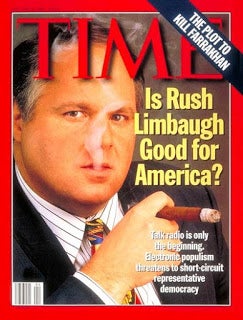 RUSH: Incredible. This is incredible. Mr. Snerdley, the rest of you, do you remember there was a TIME magazine cover — many of you won’t remember this but we’ll find it, we’ll get the cover and we’ll put it back up there at RushLimbaugh.com — TIME magazine did a cover with me on the cover. I was not mentioned but once in the story. They put me on the cover to sell the issue, and it was a doctored photo of me with a churlish grin with cigar smoke coming out of my mouth. “Is Rush Limbaugh dangerous for America?”

Well, lo and behold, from the Brookings Institute, by Grace Wallack: “Is Too Much Democracy Responsible for the Rise of Trump?” I told you this was gonna happen. I love this. I told you, started with Nate Silver, FiveThirtyEight, Trump was elected, but did his voters actually mean this? Did they understand what Trump was gonna do?

That’s what all of this means. And you could make book that whenever the Democrats lose, a variation on this theme is going to appear. And right here it is at the Brookings Institute inside their think tank, “Is Too Much Democracy Responsible for the Rise of Trump?” And it begins this way. “Trump is arguably the most unlikely, unsuitable, and unpopular presidential nominee of a major party in American history.”

He was elected for crying out loud, but yet he’s the most unpopular. See how that works? This according to scholar Thomas Mann at the Brookings Institute in his new paper — yes, he wrote a paper. Not even a book. This thinker at the think tank, Thomas Mann, he’s been around as long as I have, he’s been around longer. I remember reading about this guy when I was in Sacramento in 1984. I mean, the dinosaurs, they’re still there. Thomas Mann in his new paper about competing theories on Democratic access.

“But, Mann argues, Trump did not come out of nowhere. As economic stagnation and concern over refugee migration in much of Europe.” This actually is from last summer, folks. This even presages, predates. This is from last June when they’re worried that Trump’s voters are so stupid and they don’t know enough to be electing Trump. It happens when they’re losing, when they think they’re gonna lose.

We’ll find that TIME magazine cover, maybe even the text. It seems that there were two, because they ran that cover story on me, “Is Rush Limbaugh good or bad for America,” I forget which, and the next week the cover was of Fidel Castro with a glowing story on the paradise he had created for his people in his little Caribbean, well, jail.

RUSH: I want to read something to you from the TIME magazine story from 1995. It has me on the cover: “Is Rush Limbaugh Good for America?” It says, “Talk radio is only the beginning. Electronic populism threatens to short-circuit representative democracy. Email and other tech talk may be the third, fourth or Nth wave of the future, but old-fashioned radio is true hyperdemocracy. Very hyper. Like the backyard savants, barroom agitators and soapbox spellbinders of an earlier era, Limbaugh & Co. bring intimacy and urgency to an impersonal age. … What’s new is that today the radio rightists are wired into the political process.”

They go on and on and on to talk about there’s too much democracy, too many of you people involved, and the reason that there are too many of you is that you’re ignorant. You do not know what you’re doing. You fall for the lies told by the wrong people, Trump being the latest example of that. And they’re back to the theme now. There’s too much democracy going on out there. Just like Senator Ernest Hollings said during (chuckles) one of the economic bubbles, “There too much consuming going out there.” Remember that?