RUSH: It is being reported that the White House has blackballed CNN, that the Trump administration is now refusing to send any surrogates, any spokespeople, anybody from anywhere in the administration to CNN because they are fake news. The administration is not going to grant CNN access to any administration officials. Finally! This kind of thing should have been done long ago! The way Republicans are treated by these fake news outfits, there’s no reason to show up there and get pummeled unless you have the ability to pummel back.

So the Trump White House has told CNN, “You’re fake news. We’re not sending our surrogates to your network.”

RUSH: CNN’s town hall, this audio sound bite number six. Let me make sure it’s actually in some… Headline: “Town Hall Plant Cannot Read Question She Was Given on Trump’s Executive Order.” Okay, I want to make sure I play you the right bite. Looks… Okay. So what we have here, a Yemeni — for those of you in Rio Linda, somebody from Yemen, which is the Middle East, a terrorist hot spot. A refugee from Yemen, a woman named Bushra, is asking a question at the CNN town hall. And she has difficulty reading it off her smartphone.

Now, they’re trying to portray the woman as spontaneous. She showed up at the CNN town hall because she’s outraged at what Trump is doing. She’s outraged at Trump’s executive order. She is outraged. She is fit to be tied. And, of course, what she really is is a plant. She’s a CNN plant, a Pelosi plant, and she can’t even read the question they gave her, much less make it sound like it’s spontaneous, or so I’m told is on the bite. I hope it’s on the bite that way. Let’s see… 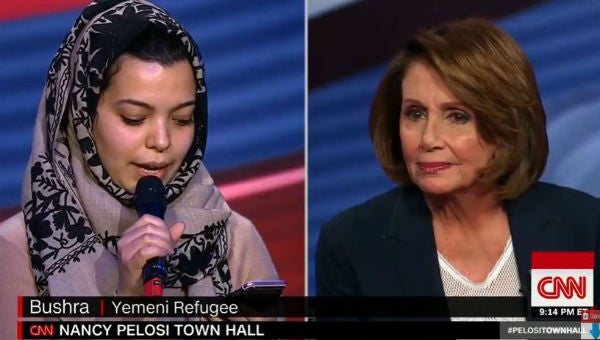 BUSHRA: My mom is now recently living in a destroyed house because of the air strikes. And she wasn’t able to come to the United States because of this decision that Donald Trump did. So my question is, what can the…? Sorry. What is the Democratic leadership…? Sorry. Help us… Sorry. What could you help us and our people to ensure that… to ensure that more families are not torn apart?

RUSH: You know what this reminds me of? Mr. and Mrs. Khizr Khan, you know, at the Democrat National Convention. They were able to read their lines. But this poor woman from Yemen, they went out and found her. She’s a plant! This is exactly what the Democrats — phony baloney, plastic banana, good-time rock ‘n’ roller go out and get this babe, and she supposedly is outraged over Trump’s ban. She’s out. Her family’s gonna be torn apart and the world is gonna end and bombs are gonna fall and there’s gonna be explosions and, oh, no! And she can’t read the question right off of her smartphone. That’s where the question is. So Pelosi says, “Okay. It’s okay.” Here is… Is this Pelosi’s answer? Well, it suffices as such. Here’s the answer.

PELOSI: If you detect some impatience in my voice, it’s because your family is suffering because our president is reckless, reckless, and his administration is incompetent. And we follow the lead of our spiritual leaders. When the pope talks about it is un-Christian —

RUSH: Aw, come on. Stop the tape. You people want to excoriate the pope because he pro-life. What do you mean, you listen to the pope? When the pope speaks he’s one of your inspirational leaders? Anyway, you know what this is? This is exactly what I was talking about earlier. This is a totally manufactured, phony, scripted event that is made to look organic and spontaneous and that the outrage is genuine and it is heartfelt, and CNN just happened to come along when it was happening and televise.

When the whole thing instead is a scripted TV show, and this is how it’s done. This is how the media works with the left to create a false illusion of genuine and organic human behavior when it’s all scripted and most of the people — many of them — are actually actors. Not professional actors, but they’re recruited ’cause they look the part. They’re given lines to utter in the form of questions of their great respected Democrat leaders. The whole thing is phony, folks — literally phony — and the media helps give it weight and reality.