RUSH: We have the Super Bowl coming up on Sunday, the Atlanta Falcons and the Patriots. I saw Lady Gaga did a press conference promoting the upcoming halftime show. You know what Lady Gaga said? Lady Gaga said that she doesn’t want the halftime show to be a step down in intensity. She said (paraphrased), “You got these guys out there,” meaning the players, “and they’re just running collisions on each other every play! I mean, they’re out there, they’re trying to kill each other, and I don’t want the halftime show to be any different.” 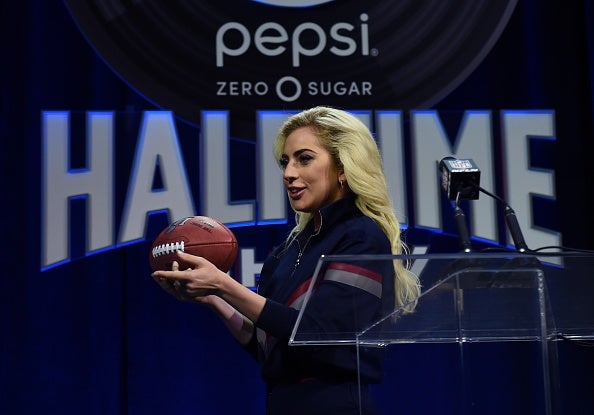 Then she went on to say that it was definitely gonna be a statement.

Well, we can pretty much assume what that statement’s gonna be, and I, for one, don’t care to see it. I don’t care to have to come in here and talk about it on Monday. I’m just not interested. It’s too predictable. And I doubt that she’ll have anything to say that would intrigue me or inspire me or do anything other than being totally predictable. But then there’s the game analysis, and there’s two ways to analyze this game: The X’s and O’s and on-field strategy, and then the intangibles, and then determining which of the two will have a greater impact on the outcome of the game: The X’s and O’s and the strategy, or the intangibles?

I’m voting for the intangibles.

RUSH: Okay, Super Bowl, quickly.  Two ways to look at this game.  You’ve got the X’s and O’s strategy, on field strategy. Bill Belichick tries to take away the opposing team’s strength and make the opposing team beat him with other people.  That would be taking away Julio Jones, wide receiver for the Falcons.  You go through all of that and then you come down to what you think the game’s gonna be, best quarterback.

I don’t think that’s the way to look at this.  I think you have to look at the intangibles in this game, and I think the biggest intangible is the motivation of Tom Brady.  There’s a lot on the line for Tom Brady.  He can become the first and only quarterback to win five Super Bowls.  He can get rid of that Deflategate monkey on his back.  His mother is ill and it took pretty much everything she had to get to this game.  This is gonna be the first game of the season she’s been to.  He’s a very centered guy in this regard.

You’ve watched games and you’ve seen the momentum shift and you wonder why.  I mean, teams come out of the gate looking like well-oiled machines and they’re just going fast and in the middle of second quarter the game takes a total change, nobody can understand the momentum shift changes.  If a coach could they’d never be out of a job.  But it’s those kind of things that I think are gonna determine this game.

The Falcons can beat the Patriots, there’s no question in my mind.  And the Falcons’ skill position players can stick with the Patriots’ skill position players all day.  And then there’s the intangible of injuries in the game.  You just don’t know.  But I think the motivational aspect, you might think, “Rush, they’re pros.  They don’t need any more motivation.”  That’s where everybody’s wrong.  Human beings are human beings, and there are things that get your adrenaline going even more than certain things do.  Mark my words.  I think it’s gonna be a rout.  Either way, it’s gonna be a rout.

And also this.  “Secretive Anti-Trump Protests to Erupt Super Bowl Weekend in Houston.”  Keep a sharp eye.  They’re gonna be portrayed as organic and natural.  Lady Gaga’s practically telegraphing her halftime show as anti-Trump.  The NFL has hired the cast of Hamilton to sing America, the Beautiful. They’ll probably put Trump in the lyrics.  If you’re a Trump supporter you’re probably gonna get pretty ticked off at stages watching this game.  We’ll see if I end up being right about how much of this.

RUSH:  No, I’m not predicting a winner. I’m telling you, if things — well, I guess I am.  I’m saying the Patriots are gonna win if all things being equal.  I just think the things motivating them are things the Falcons can’t even approach for motivation, other than beating the Patriots.