Kurt Schlichter Nails It: The Left Hates You

RUSH:  All right, Kurt Schlichter, Townhall.com: “The Left Hates You. Act Accordingly.” There are times when I feel like I’m — and I don’t listen to other people that do this, folks, and I’ve mentioned this for years and years as to why, ’cause I don’t want to inadvertently hear and say and repeat what others have said.  It’s a desire to always be, quote/unquote, “original.”  So I… There are probably others that sing the same tune, but I’m just happy to see it here in Town Hall, because I think this is fundamentally important: Who the left is, who are these people on the riotous protest march, who are these people marching every day? Even after what they’re upset about…

We now know for a fact that when JFK at LAX and all those airports on that Saturday when Trump first put that ban in, those airports were filled in 10 minutes.  And we came to find out that the protesters had been organized since November.  They had registered, they are paid, they’d signed up. They’d been given the signs to make and print, maybe shown where to go to get them, and they were just waiting for the marching orders. They were waiting for the first thing that Trump did to mobilize.  That happened to be it, and there were they were. 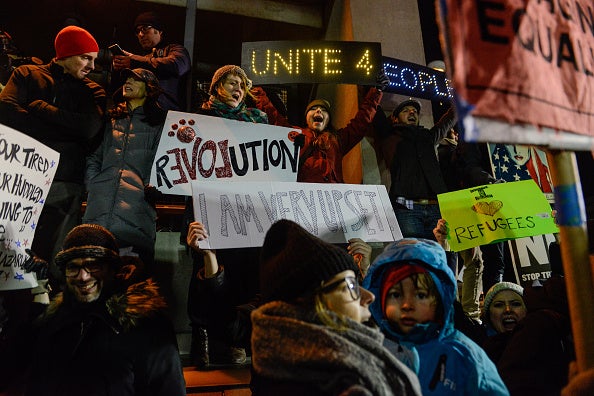 Now, the media makes it look it’s spontaneous and organic and the media make it look like everybody agrees with this and everybody’s on same page here, and that’s for psychological reasons.  And in years past, the Republicans have always fallen for this stuff, and it succeeded in making Republicans modify their views, modify their behavior, dial back their opposition or what have you, under the mistaken belief that there’s common ground to be found with these people. That there’s a level of outreach that we can engage in and that we can find cooperation and we can work together to “make Washington work” and all this happy razzmatazz.

And it’s not possible because that’s not what these people are doing.  They’re not seeking grievance for the sake of redressing an issue.  They are trying to shut down what won.  They are trying to eliminate any opposition.  There isn’t any desire to get part of what they want with compromise.  They are all about overthrowing, because they lost.  Let me give you some pull quotes here from Mr. Eichenwald.

“They are fanatics, and by not surrendering, by not kneeling, and by not obeying, you have committed an unpardonable sin. You have defied the Left, and you must be broken. They will take your job, slander your name, even beat or kill you — whatever it takes to break you and terrify others by making you an example. Your defiance cannot stand; they cannot allow this whole Trump/GOP majority thing to get out of control. They must crush this rebellion of the normal, and absolutely nothing is off the table.”

Right on, right on.  “They must crush this rebellion of the normal…”  I have a different term for it.  It is the reclamation of our country.  Our country was headed down the tubes. It was in the midst of a transformation to make it into something we were never founded to be.  That was the Obama objective.  That’s the objective of the far left, not just here, but around the world.  This election is traditional Americans attempting to reclaim their country.  Good old American values, time and true honored since our founding.  There’s a lot going on here with this election.

There’s a lot that’s unstated and unspoken still because of the fear of what will happen to you, because it will all be said to be in violation of political correctness.  So the only thing people can do to express their disgust and their desires is to show up and vote, and they did, and the left lost.  And the left has been losing big at the ballot box in this country since 2010.  They’re beside themselves.  So rather than realize that they might have to make some changes and modifications to win back the sympathies and the support of the American people, that’s not at all what they’re about.  They’re about beating their opponents into the dust.

They’re not about compromise. They’re not about change. They’re not about working together, crossing the aisle, or any of that other happy razzmatazz.  They are about destroying the opposition, and Mr. Eichenwald here writes, “They must crush this rebellion of the normal…” You know, you let certain leftists run across that phrase and there’s gonna be hell to pay, because what they think is that there’s a normal America that’s typified and represented by the majority, and then the oddballs and the kooks and the freaks.

And the kooks and the freaks and the oddballs are tired of being kooks, oddballs, and freaks.  They want the way they are — the things they believe — to become what is normal, and there is a resistance to that as normal, and that’s what the election was about in part.  So they — the left — look at this as a rebellion of the normal, and it cannot be allowed to grow. It cannot be allowed to be planted and blossom.  Now, “the left will never say these things out loud, but make no mistake: If violence is what it takes for the left to prevail, then violence we will have.

“You saw it.  You were meant to see it.  Berkeley was a message about the price of dissent where leftists hold sway.”  In other words, they own Berkeley. They own California.  You dare to send a conservative in there to say what he thinks; this is what’s gonna happen to you!  There’s no tolerance. There’s no free speech. There’s no openness. There’s nothing except, “You aren’t permitted, you aren’t welcome, because you are hated.”  We, folks, are hated.  We are despised.  Even though we’re not known personally, we are hated and despised.

Mr. Schlichter says here, “The first step” for those of you who have not full-fledged admitted this “is to end the denial. Open your eyes. See what is happening. Don’t allow yourself to be deluded by false nostalgia for a past period of cultural peace that existed only because, at that time, the Left was winning. They hate you. Look at Twitter. Look at Facebook. Try and tell yourself that leftists are just nice people who disagree with you on a few policy details,” and you’ll forever be deluding yourself. Stop. “Stop deluding yourself. Stop fooling yourself.  Understand that this must get much worse before it can get better. We may wish to stop the cultural/political struggle, but they can’t stop.” The left can’t. Theirs is a “religion.”

Norman Podhoretz said something once, actually wrote this in a column and in a book.  He’s Jewish, conservative Jew.  And he’s forever being bombarded with the question, “How can Jewish people be liberal with what’s happening to Jews all over the world, with anti-Semitism, how can they be anti-Israel, how can liberal Jews be pro-Palestinian, for example?”  And Norman Podhoretz said, they’re liberals, not Jews.  Liberalism is their religion, not Judaism.  Judaism is their tribal identification, but liberalism is their religion.

And he’s right.  Their religion, the left’s religion tells them that we are all those isms and ists.  Racists, sexist, homophobic, greedy. We hate science. We’re deniers.  Some of us even love Hitler, they say.  How could they tolerate us?  How could they ever allow us power if we are that embodiment of evil?  They can’t.  They are sick.  Their ideology is sick.  Their false theology requires that we be eliminated, enslaved, made irrelevant, what have you.  We cannot be tolerated.  We certainly can’t be allowed to hold the reins of power.

Mr. Schlichter writes: “I hoped that my novel People’s Republic, about what lies at the bottom of this blood-soaked slippery slope, would be rendered moot by the GOP’s victory in November. I was wrong. The Left has redoubled its efforts. … They hate us. And however they come at us, we need to be prepared to fight.”

I will tell you, he is exactly right.  He is exactly right.  There are those in power in Washington who really believed that much, not all, but much of this discord and disunity would dissolve after the election, even if Trump won, that they would concede the fight.  And the fact that they’re doubling down has come as a shock to many. Not to me, and it’s distressing to me that it’s come as a shock.  It isn’t personal.  You know, I realize you win an election and you run on unifying and making America great and you think that okay, let’s go, let’s all make America great.

These people, America never has been great to them.  America’s never been anything but flawed. 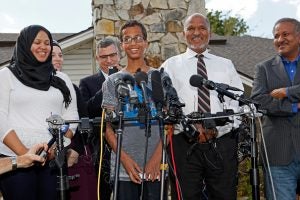 RUSH: I’m told that I had an episode of verbal dyslexia during that last little bit. I called Mr. Schlichter Eichenwald once. Kurt Eichenwald is a rabid leftist out of-his-mind writer at Newsweek and whoever else will take him. Kurt Schlichter, Townhall, he’s the lawyer who crushed the Clock Boy libel suit. Did you hear about that? Remember Clock Boy, the kid in Dallas who — Ahmed Eichenwald, yeah, he made a bomb or a timer mechanism to a bomb and won a science project and it was heralded as one of the greatest things of all time. It was the cheapest piece of… And when he was denigrated for whatever, he sued or his dad sued for defamation or whatever, and he just got smoked. It was Kurt Schlichter who ran the case.