RUSH: What are we in here? Third week of the Trump administration? Now, that’s important, because some people are getting impatient. Three weeks in. Not seeing some action out there. The Drive-Bys and the left — you know, it’s amazing. These are people that love government, they love government process, and they are the ones bringing it to a screeching halt.

Teachers unions don’t want to surrender any control. They don’t care about the quality of education; they maintain the control. It’s about money and economics. And the Democrats is in the Senate can call Betsy DeVos anything. They can call her a devil woman. They can call her a b-i-itch, and nobody ever accuses them of sexism, nobody ever accuses them of being anti-female or anti-woman. It’s just fascinating to catalog this. I know it’s hypocrisy, and hypocrisy never attaches itself to the left and to the Democrat Party.

RUSH: Betsy DeVos has just been confirmed. It’s historic. The vice president cast the tie-breaking vote, getting her confirmed. This is big for a lot of reasons, not the least of which is that the Democrat leader in the Senate, Chuck You Schumer, called Betsy DeVos the worst cabinet nominee ever. Betsy DeVos was the nominee that the Democrats decided they were going to destroy. They were gonna prevent her being confirmed as a statement to their base and as a panacea to their donors, because the teachers unions are huge, huge powerbrokers and donors in the Democrat Party.

And yet she’s just been confirmed. I don’t care if it took Pence voting, she has been confirmed. And Betsy DeVos wants to turn public education upside down and fix it with such things as school choice. The hypocrisy on this, folks, this is really, really I think serious stuff. The Democrat Party has always proclaimed itself to be the party of the little guy, the disenfranchised, the downtrodden, the hungry, the thirsty, the victims. All of the poor and all of the powerless, the Democrat Party was their champion. And look what the Democrat Party has done to the schools that educate these people.

Many of them are in war-zone-like neighborhoods, broken windows proliferate these actual school buildings. The things that these kids are being taught and learning are just worthless. It’s a liberal indoctrination, if anything. They’re not being taught a thing about the greatness of their country, quite the opposite. But it’s worse than that. School choice, do you realize that the minorities in this country love the concept of school choice? They get a voucher and they are permitted to send their kids to any public or private school if the program exists where they live, that their voucher will pay for.

Every one of these minority families that gets a voucher loves it and they send their kids to the best schools they can find, and they never end up going to the schools they would otherwise go to if they didn’t have a voucher. Now, these are direct threats to the teachers union. School voucher, school choice, parents being able to choose where to send their kids to be educated is the biggest blow to the teachers unions and the left that you could imagine. It destroys their monopoly. It destroys their monopoly over thought control and propaganda, indoctrination, and everything.

And yet the Democrats claim they’re for the little guy, and they claim they’re for minorities, and they claim that they want people to be able to escape whatever bonds of poverty they find themselves. Do you know what the first thing Obama did when he became president in 2008? There was a school choice program in Washington, and it was being used and it was adored, it was loved, and it was being used by many minority families.

They were able to send their kids to schools like Sidwell Friends where the Obamas and the Clintons and the Gores and all the other inside establishment people send their kids, finest private school in Washington in the area. And there was a school choice program where minorities could participate. Obama shut it down. I mean, within weeks of being inaugurated. Just shut it down, because he had to. He had to please the teachers unions who had donated greatly.

And they’re never called on it. They are never criticized for it. They are never, ever questioned about it. You talk about compassion, there is zero compassion in the way the Democrats have dealt with this. Well, Betsy DeVos represents many things, but primarily she represents a big, big blow to the monopolistic control over public education that the teachers unions in this country have, and that’s why she was two things.

She was literally a devil-like person to them who shouldn’t be confirmed on substance. And then secondly, she became the target, she was going to be the nominee that the Democrats prevented from being confirmed just to show that they could do that. Now, since she was the worst of the worst, she’s the worst nominee ever, Chuck You is kind of in a bind now because all the remaining nominees are clearly better than she is because she’s the worst ever.

But then this takes us into the discussion area of the nature of these public protests and who’s doing it, what the objective is, and whether or not they’re going to be successful in slowing, stopping, delaying any aspect of the Trump or Republican agenda. And, I’ll tell you, regarding the headline here: “Voters Await Economic Revival in a Part of Pro-Trump America.”

Voters await economic revival in part of pro-Trump America. I know it’s an AP story and they’re out trying to cause trouble, but let me just ask you, how many of you — I know I’m not gonna be able to hear the answer but I’m gonna guess some of you are gonna answer yes to this, how many of you are starting to get alarmed when you see the president say, “Well, we’re not gonna be able to do anything with Obamacare ’til next year?” And you haven’t seen much happening on tax cuts yet. And you see the judiciary shutting down the Trump attempt to vet would-be terrorists getting into the country.

How many of you are starting to get concerned here that the things you elected Trump to do don’t seem to be happening? I mean, there doesn’t even seem to be any preliminary action on some of these. Are any of you out there? And if you want to talk about it, feel free: 800-282-2882. I think one thing people have to remember as we go forward here, and I mentioned that the Reagan tax cuts are an example, were not signed into law of 1981, basically seven months. Now, they were debated. The legislation was presented to Congress months prior to that, and the debate was fierce.

We’ve got the Supreme Court nominee Gorsuch. You know they’re gonna try to delay that. They’re gonna delay that as long as they can, even though he’s going to be confirmed. It’s clear what the left’s stratagem here is just delay, delay, obstruct, obstruct, and try to stop Trump from accomplishing anything. But the only way that can really happen, folks, is what? A protest march cannot stop Donald Trump. Massive public demonstrations, fires, blowing up buildings can’t stop Donald Trump. But what can? Think about that when we come back. 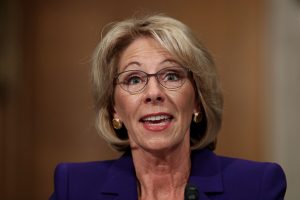 Not one Democrat was interested in demonstrating how Washington can work. Not one Democrat was willing to cross the aisle and demonstrate compromise in an area important to all of our children. Not one Democrat. Not a single Democrat.  That’s why it required the vote of Mike Pence.  So we had 50 Democrat senators trying to deny Betsy DeVos’ nomination to lead the education department, which is a disaster.  It has to be reformed.  Better yet, busted up.  Betsy DeVos, a champion of school choice, of competition — a champion for all schools and schoolchildren.

America’s public education system is no longer great; it’s mediocre — and that’s being kind, given the resources.  I mean, look at how much money we spend on education, and you look at where we rank, and then you encounter people and see them on TV, whatever — you read what they write — and you find out that ranking is probably accurate, because we have a lot of ignorant people in this country that have not been educated about some of the basics, much less the truth of the founding of this country.