Have You Seen These Photos of Obama?

RUSH: So I’m doing my show prep today, and I see this picture of Obama. Have you seen this? He’s out there wind surfing down in the British Virgin Islands on a private island owned by Sir Richard Branson of Virgin Airlines. And, honestly, when I saw the picture, I thought — before I knew anything about it, I thought it was a picture of a woman getting ready to water-ski or do something out there on the ocean. And then I saw the caption and it says Obama, and I said, “What?” 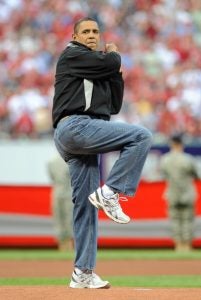 When you look at this picture, the way the helmet looks like it’s a female with long black hair. I mean, everything about it, I was stunned.