RUSH: The judge in Seattle by the name of Robart who put a stay on the Trump executive order, was not a Republican judge. He was appointed by George W. Bush, but he was chosen by Patty Murray. He is an ardent leftist. He is a classic example of a judge who is actually a judicial activist who uses his position on the court to implement his own policy beliefs, not to sit there and judge or decide the law. And when he issued his ruling, he made some statements that have now been confirmed as untrue. 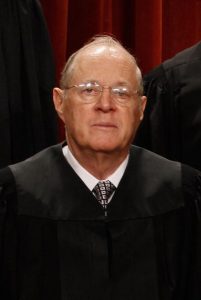 It is presumed that this case, if it ever goes to the court, would end in a 4-4 tie — which is a big assumption because it assumes that Anthony Kennedy is gonna find with Trump, and, if you do a search of Anthony Kennedy’s decisions on issues related to this, you find that he’s very concerned in cases where the judiciary gets trumped, so to speak. He doesn’t like the idea that the judiciary by statute must defer to the executive branch when it comes to statutory law, and he has found in previous occasions in the past against the executive in immigration cases.

So it’s not a slam dunk that it would be 4-4. It’s entirely possible that the Trump executive order case comes out of the Ninth Circus with the original judge in Seattle affirmed and the stay on Trump’s order then affirmed, then it would go to the Supreme Court, and it could well be that it could be 5-3 anti-Trump, 5-3 oppose Trump, given what the proclivities of Justice Anthony Kennedy are. So the AP is out today with a story, and the headline is this: “Scholars Say That the Liberal Reputation of the Ninth Circuit Is Overblown.”

Well, no, it’s not. The liberal reputation of the Ninth Circuit is well deserved. The liberal reputation Ninth Circuit Court of Appeals is right on the money. But AP is now telling us that — no, no, no, no, no — it’s overblown the fact that the Ninth Circuit’s a bunch of libs. They say this: “The Ninth U.S. Circuit Court of Appeals, which is weighing the appeal of President Donald Trump’s executive order on immigration, is the federal appeals court conservatives have long ridiculed as the ‘nutty Ninth’ or the ‘Ninth Circus.’

“Covering a huge swath of territory — nine western states plus Guam — the San Francisco-based court handles far more cases than any other federal appeals court, including some rulings that have invoked furor from conservatives over the years. Among them: finding that the phrase ‘under God’ in the Pledge of Allegiance is unconstitutional…” They literally did that. But the Ninth Circuit Court of Appeals is the most reversed court of appeals in Supreme Court history.

That’s another thing you need to know: They are reversed more than any other appellate circuit, and they were reversed in this when they actually ruled that inserting “under God” in the Pledge of Allegiance was unconstitutional. “But some legal scholars say the Ninth Circuit’s liberal reputation is overblown and that the court has moved to the middle as some of President Jimmy Carter’s appointees … have taken semi-retired ‘senior’ status or passed away.”

So why is the Associated Press trying to convince us that the Ninth Circuit isn’t so liberal after all? Well, look at the logic here. From the article, it says this: “President George W. Bush appointed six of the court’s 25 active judges, but 18 have been appointed by Democrats. The seven appointed by President Barack Obama are generally considered moderate…” Now, that is just flat-out BS. Obama didn’t put a “moderate” judge on any court anywhere. No Democrat puts a moderate on the court! That would be protest-worthy.

The Democrats put activist leftist extremists on courts. But here’s the AP telling us that the seven judges that Obama placed at the Ninth Circuit are “considered moderate.” So you see? There really are only six Republican-appointed judges at the Ninth Circuit compared to the 18 appointed by Democrats, but the seven judges Obama appointed are all “moderates,” and therefore the court’s not nearly as liberal as it used to be.

And the purpose here is when the Ninth Circuit upholds the judge in Seattle, it’s not gonna be said this is a bunch of liberals staying loyal to each other No, this is a bunch of moderates who are ruling on the law that President Trump’s a wacko, insane lunatic and was off his rocker when he did this. That’s why they write this story. So the low-information crowd — the Millennials that pick it up on Yahoo News — will believe the Ninth Circuit is just made up of intelligent, reasonable people, and they quickly found that Trump is a lunatic.

I have news for you. 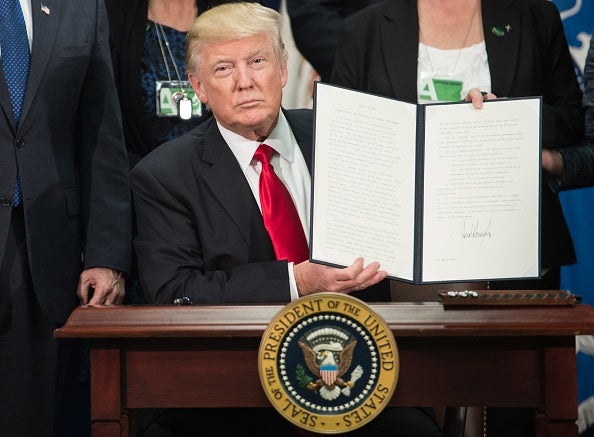 Trump’s executive order is entirely legal. I don’t know. Some people might think they botched implementation, the roll out. But it’s entirely legal, by virtue of statutory law. By that I mean there are statutes, federal statutes — laws passed by Congress — which grant the president of the United States this explicit power. Obama has used many of these statutory laws in executive orders on immigration. But, back to the judge, Judge Robart. The federal judge who halted Trump’s travel ban was wrong in stating that no one from the seven countries targeted in Trump’s order have been arrested for extremism in the United States since 2001.

Now, this was one of the things originally reported, the judge, in his ruling, implied the president’s a nutcase. I mean, he’s got this ban on travel from seven countries and we’ve never had anybody from these seven countries arrested in this country. The fact that you would even need to fact check that to find the judge is wrong is a little bit disturbing. When Judge Robart said that the press should have laughed this in his face. Of course they’re never gonna laugh in his face.

“Just last October, an Iraqi refugee living in Texas pleaded guilty to attempting to provide support to the Islamic State group, accused of taking tactical training and wanting to blow himself up in an act of martyrdom. In November, a Somali refugee injured 11 in a car-and-knife attack at Ohio State University, and he surely would have been arrested had he not been killed by an officer.” There have been about a dozen Somali refugees in Minnesota arrested and convicted for extremism since 9/11. The AP reports some of this but not nearly all of it.

The point is the judge was wrong. Everybody’s out there talking about what a dummkopf Trump is and how he’s ignorant and doesn’t even know what he’s doing, and they revel in this brilliant judge. The judge got fact after fact after fact wrong in his ruling, and his ruling didn’t even rely on the law. And Breitbart has a story providing even more details the AP couldn’t manage to admit in their fact check article. Headline: “Seattle Judge Ignorant About Jihad Convictions Prior to Imposing Refugee Reform Ban.”

Now, they’re starting to get concerned. NPR, headline: “What If ‘Something Happens’ After Judge’s Ruling On Trump’s Travel Ban?” And here’s how the story begins. “If a refugee commits a crime, will a federal judge have blood on his hands? President Trump says yes. After Judge James L. Robart temporarily blocked an executive order that stopped all refugees as well as visitors from seven Muslim-majority countries, the president wrote on Twitter: ‘Just cannot believe a judge would put our country in such peril. If something happens blame him and the court system. People pouring in. Bad!'” 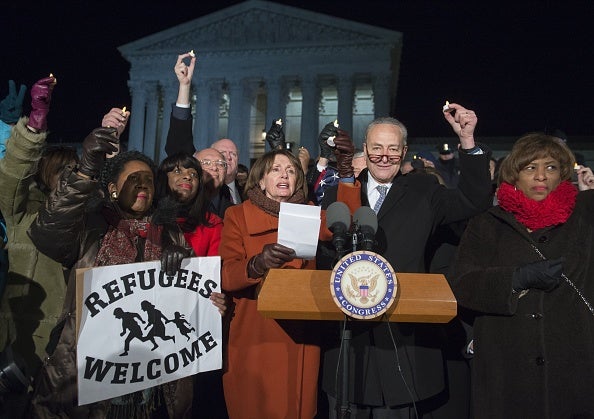 That’s Trump’s tweet. So now the left is all atwitter. Well, they’re all worried ’cause Trump raised an important point. The judge is out there saying, “We don’t have anything to worry about. We’re never had people from these seven countries arrested for anything,” which has now been demonstrably proved not true. So if an act of terrorism happens by somebody that snuck into the country because the judge stayed the order, will blood be on his hands?

The left is trying to say no way, no way, not possible, it’s all gonna be Trump’s fault. But they can’t. The Washington Post has even picked this up. “‘If Something Happens’: Trump Points His Finger in Case of a Terrorist Attack — President Trump appears to be laying the groundwork to preemptively shift blame for any future terrorist attack on U.S. soil from his administration to the federal judiciary, as well as to the media.”

He’s not shifting anything. He’s not laying the groundwork. He’s pointing something out. The president took steps that he promised he would take during his campaign to engage in a much tighter vetting of refugees and illegal immigrants pouring into the country, particularly from Islamic Jihad nations, and a federal judge stayed the order, shut it down. The federal judge, by the way, does not have the authority that he used to do this. 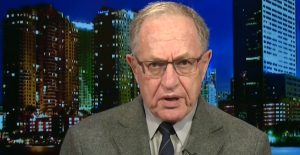 This is about safety. It’s about vetting people who might have ill intentions. It’s not about banning religious people, which we can do, too, if we want to, but that’s not what this is. So it’s being argued at the Ninth Circuit now, and we’ll see what happens there. The odds are that Judge Robart will be upheld and will make fast tracks to the Supreme Court where all bets are off. It’s 4-4 unless Kennedy joins the Judge Robart crowd, in which case — well, it will be fascinating to see what happens if the Supreme Court stays the stay, confirms the stay.

Meanwhile, demonstrators and protesters: In Their Own Words: Anti-Trump ‘Resistance’ Leaders Say They Want To Make America ‘Ungovernable’ — Behind the mass protests, choreographed chants and acts of violence, leaders of anti-Trump “resistance” efforts are communicating the same simple but dark message: they want to make America “ungovernable” for the president of the United States.”

Now, I want to raise an observation. Who is it constantly whining and moaning and caterwauling about gridlock? The media, the Democrat Party. They’re always complaining when the Republicans try to bollix up an Obama agenda item, or when the Republicans refuse to act fast on a piece of legislation the media and the Democrats want, they accuse them of gridlock. Here comes the sum total of these resistance protesters saying that’s exactly, we’re gonna make this whole country come to a screeching halt, we’re gonna make sure you can’t govern, and they’re applauding it, right on, right on.