Why the Future Isn’t Female, Mrs. Clinton (As Long as the Left Has Its Way)

RUSH: The Drive-Bys are livid. Mike Pence, by the way, on the Betsy DeVos thing, Pence is on his way up to Capitol Hill to cast a tie-breaking vote when they get to the confirmation vote for Betsy DeVos. You know, it remains a teachable moment, an educational opportunity to explain all of this obstruction and protesting that the left is engaging in, and it’s gotten to the point now where Rahm Emanuel, mayor of Chicago, has told them, you know, you people need to back off. You need to calm down. We are not going to have national power any time soon. This isn’t the way to do this.

But it’s only gonna intensify for a while. It’s not going to relax and go away. I mean, the babes are planning another two marches. There’s gonna be a babe strike going on out there. Haven’t set a date for it yet. And then the women’s march was so successful, they’re gonna do that again. I don’t know what they’re gonna strike. It’s just the national women’s strike. I mean, that’s it. That’s basically all we have.

And Mrs. Clinton is back. There was a Hillary sighting in Rancho Palos Verdes, California, the 2017 Makers Conference. Makers, by the way, is a storytelling platform created in 2012 by AOL for women to make and post videos. So AOL sets up a place for women to make and place videos, and they had their storytelling platform and Hillary went out there — well, she didn’t go out there, she released a video to the conference and this is what she said. 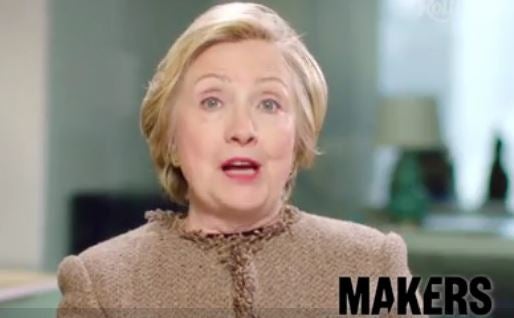 HILLARY: Despite all the challenges we face, I remain convinced that, yes, the future is female. Just look at the amazing energy we saw last month as women organized a march that galvanized millions of people all over our country and across the world. Now more than ever, we need to stay focused on the theme of this year’s conference: Be Bold.

RUSH: You know why the future is not female, as long as the left has anything to do with it? I’m gonna tell you right now why the future is not female. It’s because the primary objective of the left and the Democrat Party is to make everybody feel like they are a victim of something. If you are a liberal, doesn’t matter, you are a victim. Women are victims of a misogynistic America with a rape culture running rampant on college campus.

And this is a subtle form of genuine discrimination by the left against its own people. By constantly telling them how they don’t have a chance, the deck is so stacked against them that they’re all victims. They never will become independent. They will always be wards of the state, and they’ll be happy wards of the state, and they’ll be voting for bigger government, more government, because that’s the only place they will believe that any form of happiness and economic security, health care security, whatever, comes from.

And in this way, the Democrat Party and the American left are literally destroying lives. They are destroying the lives of their own voters, of their own supporters by automatically classifying and qualifying these people as victims. And that’s what they’ve done to women.

That’s what really the foundation of feminism was back in ’69 or ’70 when the current modern era of it all began. It was all based on how women are victims of that or that — disadvantaged, discriminated against — and it hasn’t changed. They’re still victims, no matter what success, real or imagined, they’ve had, they’re still victims. They still have the victim mentality. Something else you are when you’re a victim: You’re constantly enraged. You’re always angry. It goes hand in hand with never being content or never being happy.

And this is exactly what they’re doing. And they are attempting to cement this way of life, victimhood, into the pop culture and to every group of people that they come into contact with. And it succeeds, because one of the things that victimhood also inspires is fear — never-ending, constant fear. If you’re a victim, you’re not self-reliant. If you’re a victim, you can’t help yourself. If you’re a victim, you are consistently always dependent. Well, when the Democrats don’t win, as they didn’t do in 2016 and as they have in the state and local levels in demonstrable numbers, they’re losing power.

They’re losing control of the federal government. They consider the White House control of the federal government. I know they’re still populated the bureaucracy and they can stop Trump or try to stop Trump, but they’re not implementing anything. I mean, they’ve been brought to a screeching halt here. But the psychological effect is when their sponsors, when their protectors, when their caregivers lose power, they have nothing because the victimhood status they have adopted and accepted. That’s why they’re so frightened.

Because they have no ability nor desire to rely on themselves, plus no ability to. They’re not taught self-reliance. That, of course, is impugned. Self-reliance is a, no, no. Self-reliance is attacked and criticized as selfishness and bigotry and racism and homophobia and all these other things. So these people literally become scared out of their gourds when their state sponsors (i.e., the Democrats) lose. And that fear you see is manifested in these protest marches. The rank-and-file protesters.

I mean, there are some of these protesters that are organic. The leadership of all this, it’s bought and paid for by Soros. We even learned… I don’t know if you saw this, Mr. Snerdley, the Official Program Observer. Did you see all the Republicans took money from George Soros in the 2016 election? (interruption) You didn’t see this? (interruption) You want some names? John McCain, Lindsey Graham, Paul Ryan. It wasn’t a lot of money, but they all accepted financial contributions from George Soros and his various and sundry organizations.

Yeah, I think so. I’ve got it here in one of the… I’ve got four Stacks here today. Kind of depressing.