The Establishment Still Doesn’t Get Trump or His Voters

RUSH: There’s a great column in the Washington Post today by Julian Zelizer. He’s a political historian at Princeton. He’s a fellow at the New America Foundation, and he’s the author of The Fierce Urgency of Now: Lyndon Johnson, Congress, and the Battle for the Great Society. But he’s a fellow somewhere. You know when you’re a fellow somewhere, that’s big. When you’re a fellow, it means — well, reputedly smart. It means you have a chair at a think tank. So you sit there and you think and then you write what you think and then the think tank publishes it. Nobody buys it, nobody reads it, but you are heralded as great thinker.

But, anyway, this guy’s right, he said protests didn’t hurt Reagan, and they’re not gonna stop Trump. This kind of thing happened during Reagan’s first term. Reagan was despised as much as Bush was and is despised as much as Trump. In fact, some of the comparisons of Trump are identical to those made about Reagan. He’s disengaged, stupid, doesn’t know politics, doesn’t know the Constitution, he’s an idiot, he’s lazy, and all these things, and the guy documents how all of this didn’t matter a whit. It didn’t affect anything. Reagan got his agenda. 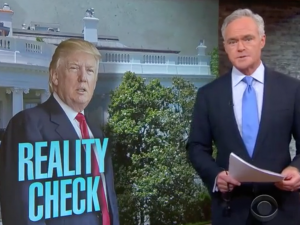 And I think where we are with all of this, like Scott Pelley opened the CBS Evening News last night by calling Trump divorced from reality. He said, “It’s been a busy day for presidential statements divorced from reality.” So the media is caught up on trying to prove every Trump lie. The one thing they got all hot and bothered about yesterday was when Trump said the murder rate was an all-time high or 47-year high.

The media went into gear and they fact checked it, “Trump’s lying! Trump’s wrong! The murder rate’s actually been coming down. Trump doesn’t know what he’s talking about.” And then Trump attacks the media and so the media decides to defend itself. And I think what I’ve said about this campaign and this presidency, going back to the first days of this campaign, is that they still do not know what they’re dealing with here in Trump. But the most important thing that the media does not know: They do not know, even today, who elected Donald Trump.

They haven’t the foggiest idea. They haven’t gone out and talked to them. They have a caricatured image of the Trump voter, and let me describe who they think Trump voters are. They’re missing one or both front teeth. They chew tobacco or smoke cigarettes and they spit constantly while sitting on the front porch reading the latest from the National Rifle Association. They have pickup trucks and they go to church. They didn’t get much beyond high school, if even that. They are poor. They are middle to lower middle class. They are 100 percent white. They are 80% male, 20% female. There are no gays and lesbians or transgenders or cisgenders or oddball genders or any other genders that voted for Trump.

That’s what they think of the Trump voter. They also do not know that the average Trump voters tune them out. They don’t know that the average Trump voter is not paying ’em any attention. They’re going about trying to destroy Trump in the tried and tested ways that they’ve been able to destroy any Republican they’ve wanted to in the past. And they’re missing the mark. And they’re missing the mark because they still don’t know who elected Trump.

They have this negative caricature of people who are idiots, uninformed, ignoramus racists and bigots, and they think that they can take Trump out by talking about how Trump lied about the murder rate and Trump doesn’t know what he’s talking, he wants a religious ban on people. They think they can lie about what Trump’s doing or even report the truth about what Trump’s doing in a sneering way and think they can do damage to Trump. And by do damage, I mean destroy his presidency, and it isn’t going to work.

I think the media is effectively right now in a circular firing squad and doesn’t know it. I think the Democrat Party’s in the middle of that circular firing squad. Can I give you an example? We’ll get to the Fauxcahontas details here in just a second. We’ll get to the oral arguments before the Ninth Circus yesterday, because, folks, I have to tell you, two of those — there are three judges in the Ninth Circus. It’s a three-judge panel, and two of those judges didn’t even ask about the law.

However, there are some individuals who are not citizens who by virtue of other aspects of law are treated as citizens, and that’s where there is some gray area in this statute. But that’s not even it. That wasn’t even explored. And I have to tell you, the Trump DOJ lawyer was horrible. Did you listen to any of this, Mr. Snerdley? It was… (interruption) Folks, it was… This guy… I mean, he even said to the judges, “You know, I got the feeling I’m not persuading you.” He said, “Well, please, if we lose here, don’t make it too bad.” 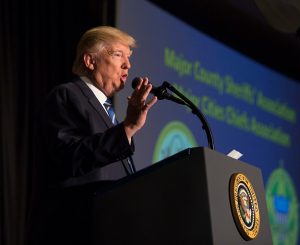 I’m listening to this. “Is this the best that they’ve got over there to send over to the Ninth Circus?” Maybe they figure they’re gonna lose there anyway. Here is the two things. Trump has tweeted — and he made the speech to the sheriffs today — National Association of Sheriffs — and he criticized these judges, and he said, “I’m not saying they’re biased; I’m saying it’s political. I can’t believe how political this was. I listened to it. I can’t believe how political it is.” People are saying, “Don’t start attacking the judges before they rule!

“There’s no way they can rule for you now because now it would look like you successfully intimidated ’em. These people are in the judiciary, and they’ve got lifetime appointments.” They’re gonna stay there long after Trump’s gone. “They’re not gonna be intimidated by you and they’re not gonna act like they are.” So a lot of people think Trump buried his own case here by going out there and ripping him. But his supporters love it. That’s the difference: The Trump voters like it.

The Trump voters like Trump telling these corrupt and politicized judicial people the truth. He likes telling them off, and they like him telling them off, because everybody knows our judiciary has been corrupted by politics. Everybody knows that the left has populated the judiciary not with judges, but with liberal activists and hacks. And there were two of ’em on that three-judge panel yesterday. Now, here’s the second thing, and this is an even better example. Are you aware that the famous upper-tier and high-class department store chain Nordstrom decided to get rid of all Ivanka Trump products?
Purses, lipstick, whatever Ivanka makes fashion related. Whatever it is, they publicly announced that they’re getting rid of Ivanka stuff, and it was last week. Well, Trump today tweeted how bad he thinks that is. He tweeted it, and he slammed Nordstrom for getting rid of his daughter’s fashion line. He said, “Her fashions are great, her products are great, and Nordstrom is also being political and making a dumb, stupid move here.” Well, I watched this on CNN, and they had a panel assembled to discuss this.

The consensus on the panel was, “You don’t do this! Presidents don’t do this! This is something a father would do. A father would defend his daughter. But you don’t go out there and pick winners and losers. The president, with his microphone and with his bully pulpit, shouldn’t be going out there and criticizing individual businesses that are making business decisions!” See, that’s not what’s going on. Nordstrom didn’t make a business decision; they made a political decision, I think.

I have some experience with this kind of rot, and I think this is a pure political decision that Nordstrom made. This is not business. They’ll hide under the umbrella that it’s business. And to a certain extent, it is. But, I mean, it’s politics driving it. And that’s what Trump was talking about in his review of the oral arguments of the Ninth Circus. He was simply saying he can’t believe how political this is. This is the law! We’re talking about the law here! What has politics got to do with it?

So he goes out, he defends his daughter — and I’m gonna tell you again: Trump supporters who hear about this — the people that voted for Trump — stand up and cheer when he does this. The fact that it’s not something presidents do doesn’t matter to them. Because these people have seen people on their side be savagely, personally assaulted and attacked with lies and distortions, and they’re fed up with nobody pushing back against it. People that vote for Donald Trump, I don’t know whether they buy Ivanka Trump stuff or not; that’s not the point.

Ivanka Trump may as well be Donald Trump in this instance. So Nordstrom effectively, as far as Trump supporters are concerned, told Donald Trump to take a hike by telling his daughter to take a hike, and Trump supporters are also saying, “Why punish the daughter because you don’t like the man, the president? It’s not fair; it’s not right.” This is the kind of thing the left has gotten away with for years, being able to… I mean, the left, it’s okay for them to boycott. It’s okay for them to politicize business.

It’s okay for them to threaten and bully businesses into bands or not selling certain products, or advertising certain places. Oh, that’s perfectly fine for the left to do that! Nobody says anything. That’s perfectly fine. That’s capitalism at work, supposedly. But when a president’s daughter is affected and he sends out a tweet ripping Nordstrom for doing this? No, no, no! We’re not supposed to do that. That’s not presidential. That’s something a father would do, but this is very, very bad.

Now, I will concede that the vast majority of political establishment types will agree in unison that Trump’s tweet slamming Nordstrom. “Bad move! Wrong move! Not presidential.” But Trump’s voters say, “Right on,” whether they buy Ivanka’s stuff or not, because Trump voters are sick and tired, fed up with the one-sided rules that exist on the American political playing field today where Republicans and conservatives can be banned, can be fired, dismissed with no pushback whatsoever. Whatever the left wants!

If a pizza shop won’t sell to gay people, then the pizza shop should be put out of business. If the photography studio or if the baker won’t cater a gay wedding, put ’em out of business. Nobody pushes back against it. Nobody says this is wrong. Nobody attempts to reverse it. Nobody comes to the defense of the businesses under attack. Well, Donald Trump has come to the defense of his daughter, a business under attack — and I’m here to tell you that the people that voted for Trump and support Trump have not one problem with that.

In fact, they’re probably cheering it.