RUSH: Looky here, folks! “President Trump plans to have lunch Thursday with a group of moderate Democratic senators who could help advance his agenda through Congress. Sens. Heidi Heitkamp (N.D.),” who was considered for a position in Trump’s cabinet, “Joe Manchin (W.V.), Jon Tester (Mont.) and Joe Donnelly (IN) are expected to attend.” This is “according to USA Today,” so it could be fake news. “All four face reelection next year and represent states Trump won [big] in the 2016 presidential election.” 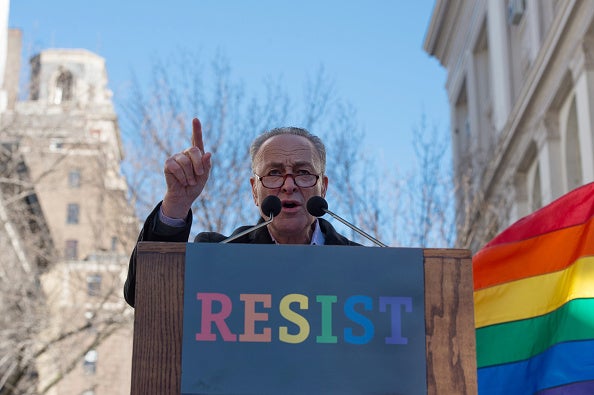 Four Democrats, folks, incurring wrath here of Fauxcahontas! Four Democrats incurring the wrath of the Democratbase to cross over and reach across the aisle to work with the Trumpster, accepting an invitation to have lunch with him at the White House. You know, I saw a poll. I don’t remember if it’s Gallup or whatever. Are you ready for this? There are more Democrats… This a poll of Democrats. There are more Democrats who know what Steve Bannon is than who know who Chuck Schumer is.

Did you see that poll? (interruption) You don’t remember what poll it is? (interruption) Well, it’s funny, but stop and think for a second. How in the world…? Chuck Schumer has been a Democrat and a leader in the Senate for Democrats and in the House. He has been there 30 years. Thirty years. Three decades! Steve Bannon has been known to people in the political world for just a little over one year, and there are already more Democrats who know who Bannon is than know who their spear carrier in the Senate is. That stuns me.

Now, what explains that?

Well, the answer to that’s simple. I will let you dwell on it.