It’s Time to Cut the Courts Down to Size

RUSH: Here is Rob in Detroit. Glad you called, sir, and I appreciate your patience in holding on. How are you?

CALLER: Good, sir. Dittos, Rush. You know, I just wanted to state the obvious. The judiciary is only a coequal branch of government. We can call the president an ass. We can call congressmen and senators an ass. Why can’t we call judges an ass?

CALLER: We know that’s not true, Rush. We know they are political. 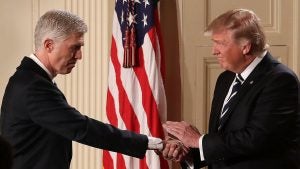 RUSH: Well, I’m just telling you what the conventional wisdom has always been about not attacking. I’m not arguing that they’re independent. Judges have become political hacks way too many times here.

CALLER: All right. Well, I think we should call a spade a spade, and I think you should definitely call this cat out, this Robart cat, and Trump should call him out every chance he gets and —

RUSH: That’s my point. As a Trump supporter, everything’s fine. Robart’s an ass; say so. Quote caller, Rush Limbaugh program, 1:33, on February 9th, 2017. Robart’s an ass; say so. Caller. Trump caller. Trump supporter. That’s exactly my point! That is what Trump supporters think. And Robart did not rule on the law. Read what Robart said. Read his ruling. You won’t find any legal analysis. You won’t find any discovery that Trump’s executive order violates the Constitution. You’ll find this guy, “Well, I don’t know how many people from these seven countries have committed terrorism acts. I don’t think any! I don’t think there have been any!”

Well, fine. That’s not a legal basis to make a ruling. Anyway, he’s wrong about that, too. There have been 24 different instances or people from those seven countries who have been apprehended, suspected, what have you. But it’s an interesting subject, this business of not criticizing judges.

Let me give you a real world example. Trump has gone after the judges on the Ninth Circuit, after the oral arguments which he either listened to or aides listened to and reported to him, ’cause they streamed it, they made it available. You know they took oral arguments on the phone? I mean, the Ninth Circuit’s out in San Francisco, and the litigants were in the state of Washington and Washington, DC, so they’re on the phone doing this, and they streamed it. And after Trump heard it, he tweets out, “I’m not saying they’re biased, but it’s so political! Wrong.” That was his tweet. “So political, bad,” whatever, “So political.” And that’s his assessment.

Now, one reaction to that was, “Mr. President, you’re forcing their hand. You can’t openly criticize them because now, if they find for you, it makes it look like they buckle to you, and they don’t want that. So, Mr. President, you’re almost forcing them to rule against you just to show their independence.” That’s what some people said. “Mr. President, just don’t say anything. Just let the ruling happen and then go after him if you want to, but don’t characterize them beforehand because you’re really limiting, because they’re human beings.

And you know judges, folks, I mean, I have a family of ’em, the good ones take it very seriously, and they do not want anybody to think that their opinions can in any way be, quote, unquote, purchased or influenced or secured. So if you start attacking them before — now, look, I know what you’re saying, “But Rush, people criticize the Supreme Court before their rulings all the time.” I know there’s all kinds of political pressure. I know. I know. But this is a specific ruling that is imminent, like within days, and it’s not a Supreme Court decision that’s months and months away. 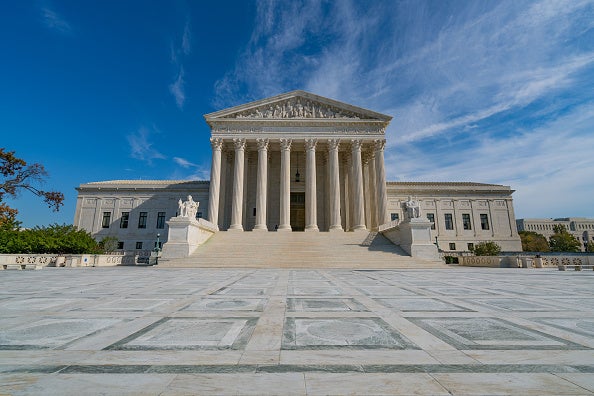 The bottom line is, we have always been told that the Supreme Court — and this does not follow elections — meaning they pay no attention to public opinion. This is what we’re told. But I’ve always had a problem with that, because they’re human beings. They’re human beings and some of them want to be publicly respected. Look at the four justices on the Supreme Court, that it doesn’t matter, whatever the Democrat Party agenda is, that’s their vote, and they are in lockstep.

And to say that they are deciding these cases on the merits of the law, you can blow holes through that with these four: Ginsburg, Breyer, Sotomayor, and Kagan. And before this, their replacements. They literally vote lockstep on the Democrat Party agenda. Whatever the case is, if the Democrat Party agenda is attached to it, you know what they’re gonna do. And no amount of criticizing them changes it beforehand or afterwards. I’m not opposed to criticizing judges. I don’t think they’re gods. I don’t think their branch of government’s more special than any other. In fact, I would argue that the Supreme Court’s become something it was never intended to be.

If the Congress wanted the Supreme Court to have 13 seats, they could do it. Congress’ role, constitutional, is the setup, not the operation, obviously, but the establishment of the judicial system, setting up the districts, the appellate districts, the state districts and so forth, the federal districts in the states, Congress does all that, yes. If they wanted to leave it at eight seats, they could. If they want to break up the Ninth Circuit, they could. If they wanted to, you know, make it two circuits, Northern California being one, put all the commie libs in that one and then put the Orange County contingency in the other one. Yes, to answer your question, they could.

But since this has evolved, it becomes almost an unstated part in every bit of legislation. Look at campaign finance. I’ll tell you how this manifests itself. Campaign finance laws, something we owe to Senator McCain, campaign finance, which is violation of free speech, because speech is money. Now, the left hates that, but it is. For people who do not have a microphone, for people who do not have a congressional seat or an elective seat, money becomes the proxy for their speech. If they can’t be heard by going out on the street and telling people what they think, they can buy commercials on TV and radio to get their word out. That’s free speech.

That’s what was big about Citizens United. Because Citizens United, the Supreme Court made it possible for corporations, which of course aren’t people, as we’ve heard, to participate in the political process by making donations. The left hates it, they despise it because it takes away an advantage. That’s why they hate DeVos, too. The teachers union is some of the biggest source of campaign money and of course the intellectual hold they have over the inculcation of young minds. But I digress.

Everybody knew that campaign finance reform, as written, was unconstitutional and it should not have passed, and it did, and it came before George W. Bush to sign, and everybody said, “Veto it, Mr. President, veto it!” He said, “No, no, no, I’ll leave it up to court.” The court will never find this constitutional. Well, the problem is they did. So what happens? Legislation gets written that is questionably constitutional or is inarguably political in some way, and it’s written in such a way as to pass constitutional muster because that’s where it’s gonna end up being finally judged as legal or not.

And it affects the way things happen, the way things are done, written, and it also encourages cowardice at various level of the legislative branch ’cause they can defer. “Well, no, no, no, no, the court take care of this.” But nobody can ever predict which way the court is gonna go on anything, and campaign finance reform, everybody thought that they would find it unconstitutional.

Obamacare. Everybody thought this idea that the federal government was mandating that every American buy a product, i.e., health insurance, that’s clearly unconstitutional, Fourth Amendment. You cannot make the American people buy a product. You can recommend it like Kelly Conway recommending Ivanka Trump fashions, but you cannot make somebody do it. And that was clearly unconstitutional.

And in the original — when we had the reading for Obamacare and Judge Reports, Supreme Court, the chief justice, if you remember that day, the first 30 seconds when people got their hands on the decision, the word unconstitutional was in there, mandate was unconstitutional. And I remember the original reports on the Supreme Court decision on Obamacare, media and everybody flashing the word, “They found it unconstitutional.” Except after people kept reading they found out that Roberts himself rewrote some of it in the form of reanalyzing some of it and turned the mandate into a tax.

Instead of saying that people were mandated to buy health insurance, Chief Justice Roberts essentially interpreted it as the government having the legal ability to tax people in order to provide health care for everybody. So what was unconstitutional became constitutional because of the reworking of the legislation by the Supreme Court. So these arguments have been going on for the longest, longest time, and it’s all rooted today in whether or not we should be able to publicly condemn judges or not. And it just depends.

When Obama criticizes the court to their face in the State of the Union for Citizens United, he’s applauded. It’s a gutsy move, it was said, very courageous, and the president’s standing firm on one of his beliefs. When Trump sends out a tweet about Robart, “No, no, no, no, you can’t do that. Our republic was teetering in a balance anyway. We’re hanging by a thread and you go out and do that.” So it just depends on who does it and then who’s sitting in judgment.