RUSH: Richard Blumenthal of Connecticut, the Senator, just one more thing on this. He’s out there asking questions of Gorsuch, and Gorsuch doesn’t say anything, and it gets characterized as Gorsuch agreeing, and here’s an example from the — well, it’s gonna scroll out of view if somebody doesn’t stop real soon, talking to TheHill.com.

This is Blumenthal: “I said to him if a litigant before your court — and the President of the United States is in fact a litigant right now in the immigration ban cases — said what President Trump said, you would hold him in contempt of court,” Blumenthal said, adding that Gorsuch did not give a response to that comment. 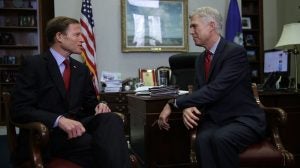 Well, why didn’t Blumenthal claim that Gorsuch didn’t disagree with him on that point, too? After all, he didn’t. He didn’t say anything, yet everybody is reporting here that Gorsuch is out thrashing Trump for what he said about Judge Robart. And, look, to the extent that Gorsuch is behaving the way he is, he’s giving the left less and less reason to oppose him, less and less. In a public sense, with this stuff being reported.

You know, Trump doesn’t care. Everybody thinks Trump’s ego is so fragile that if Gorsuch actually would go out there and say that “I am very disheartened by what President Trump is doing,” there are people that think Trump would be so mad that he would call Gorsuch and fire him before he even got to the Supreme Court. They literally believe this. There are some people who literally believe that Trump would sabotage himself in that way. That would not happen, but they want people to believe it.

The idea that they are now reporting that Gorsuch is of a frame of mind that Trump’s criticism of the judge is disheartening, all that’s gonna do is help Gorsuch in the immediate battle ahead, and that is his confirmation. And that’s the objective here. Get confirmed and then after that none of this matters, because he’s on the court for as long as he wants to stay. It’s a lifetime appointment.

So I watch all this, and it falls into the same category. You have a bunch of establishment types who are continuing to go after Trump and his administration and everything he does in the way Republicans have always been attacked, sometimes successfully, but it doesn’t apply to Trump. It just doesn’t work, and they still haven’t been able to get it through their heads that there’s an entirely different animal in town and in Washington.

The real impetus here, or the real thing to know is they still don’t understand who elected Trump. And this is to me fascinating. I mean, you look at the media and you look at the Democrats, it’s their business. I mean, they have to get ratings in one sense, votes in another. It’s their business to understand, in one case audience, and in the next case, voters. And in both instances, the media and the Democrats have contempt for a majority of Americans who voted for Donald Trump.

It was the same way during the campaign. As hard as people were trying to separate Trump from his voters, they weren’t gonna be able to do it, and you know why? It’s the same old saw: The media didn’t make Trump, and the Republican Party didn’t make Trump. Trump made Trump. Now, if the media happens to make you, by that I mean, if you are who you are because the media has sung your praises and done a series of soft soap profiles, if the media treats you as a godlike figure and that’s why you’re famous, well, the media can destroy you the next day if they want to. All they have to do is change the way they cover you.

And they hold in contempt the people who represent an opportunity to grow the audience. Hollywood holds in contempt the people who represent the opportunity to increase box office sales, and the Democrat Party holds in contempt now white working-class voters, abandoned them in November of 2011, and instead the Democrat Party is trying to get where it wants to go on this belief that the white majority is soon not gonna be a white majority, it’s gonna be the minority, and so the Democrats have already thrown in with who they think the combination next majority is gonna be, coalition of a bunch of different minorities now.

A majority of Americans, even if there are strains of people that find things that Trump does unsettling, they’re not ready to abandon him yet, because overriding all of this is policy. And I’m gonna tell you what the number one policy continues to be. And this is where everybody on this executive order is blowing it and missing it. The number one issue — and you’re never gonna have this represented honestly because the people that report on it and the Democrat Party don’t agree with it and don’t believe it, but the number one issue is immigration.

Immigration still to this day represents the greatest threat to this country remaining what it is. That has not changed. Donald Trump is the only person in the American political spectrum who’s on record as wanting to change it, to stop it, to redirect it. And, as such, his support is unwavering. And this executive order is not redounding negatively to him, much as the Drive-Bys would love you to believe that it is and much as the Democrats would hope that it is, and much as Judge Robart would think he’s actually gonna be able to destroy Trump’s efforts here.

The simple fact of the matter is people support — and there’s polling data even now to back this up — that people support Trump’s efforts here in this executive order and that they’re not happy with Judge Robart and that they’re not happy with the judiciary here that’s piling on, because it represents illegal immigration and wanton refugees coming in to the country unvetted.

It’s kind of like this, folks. It’s like climate change has everything in it that the left wants and loves in one issue, everything, or the vast majority of everything they need to get where they want is in that issue. Climate change, as an issue, and then the supposed things necessary to deal with it is a cornucopia. It’s a picnic basket of goodies. Immigration represents much the same thing to people that do not like America, to people that have a problem with America, to people who think America’s unjust and the moral from the days of our founding, to the people who think America is the problem in the world.

If we’re gonna let endless numbers of people in, and we’re not gonna assimilate them and we’re not going to stand for what’s always been a distinct American culture, and the people that voted for Donald Trump know this, they are frightened by it, and they can clearly see that the Democrats don’t care. In fact, the Democrats seem to support that and their friends in the judiciary seem to support that policy of open borders and let anybody in on the basis that we owe it to the world to let everybody have some of our prosperity ’cause it’s not fair that we’re the only ones that have such prosperity. We must share it because we’ve destroyed it for so many others.

And Trump ran on this notion of stopping this illegal immigration and rekindling some assimilation, and he’s the only one who did, prominently. And now that the Democrats and the media are aligned against him in this area, and now apparently a couple judges, Trump’s supporters are rallying to him even more. It may not be reported in polling data because the Drive-Bys don’t want to believe it. They want to believe they’re successfully driving a wedge between Trump’s supporters and Trump.

And all of these people opposing the border control who are trying to deport illegal aliens, that shows people are unhappy with Trump. The whole point of everything in the news that you see, everything is designed to make you think that the countries regrets electing Trump, that they’re unhappy with Trump, that they don’t support anything Trump is doing. But the people that voted for Trump are not buying it, they’re not of that frame of mind, and they are still every bit behind him as they were.