Betsy DeVos Is the Opposite of the Ignorant Liberal Cliche

RUSH: I just watched the video of Betsy DeVos trying to go into a public school in Washington, DC, and she’s met by a handful, 10 or 12 left-wing reprobates, a white guy wearing Black Lives Matter sweatshirt. She was nearly violently restricted from going up the steps and into the school. And then she and her, it looked like a security guard — well, an assistant, she was hustled back to her vehicle, which was a Suburban, an SUV, and this mob followed her back. They get in the car peacefully but then this guy tried to obstruct the car leaving, and he was just shouting insanely, “Shame, shame, shame.”

Well, he hosted something called The Daily Show, which was a comedy show on a network called Comedy Central. It was actually deranged anger every night that the left thought was funny. Anyway, Stewart left and they got this guy Trevor Noah from South Africa to come in here and take over the reins and host the program. He’s a nice enough guy, but he’s as ignorant as the sun is bright. It’s actually kind of a shame, ’cause the guy doesn’t know. I guess it makes sense. If you’re ignorant, you wouldn’t know how ignorant you are, by definition, you wouldn’t know what you don’t know.

And Trevor Noah, who hosts The Daily Show, was really feeling bad about Betsy DeVos being confirmed, and here’s what he said. “America seems to be going back to a place where your wealth will determine how much knowledge you can attain. And so I think it’s a scary time,” said Trevor Noah, concerned citizen. “If Betsy DeVos gets to do everything she wants to,” and I swear to you, he doesn’t know the first thing.

He may think he knows what school choice is, but he doesn’t really know what it is. He just knows he’s supposed to oppose it. He probably thinks school choice is rich people get to choose where they go to school and your kids, you know, get the toilet. Who knows what they think it is, but they’re dead wrong about it, as the rest of this quote will demonstrate. He said, “If Betsy DeVos gets to do everything she wants to, you will live in a world where even more people who do not have the means will now no longer have the opportunity to achieve the means.”

Now, the truth is — first, do you understand that? Do you understand what he’s trying to say there? Does that make sense to you? I have the added benefit of being able to read it. I imagine just listening to that you might be scratching your head. Let me read it one more time. “If Betsy DeVos gets to do everything she wants to, you will live in a world where even more people who do not have the means will now no longer have the opportunity to achieve the means.” 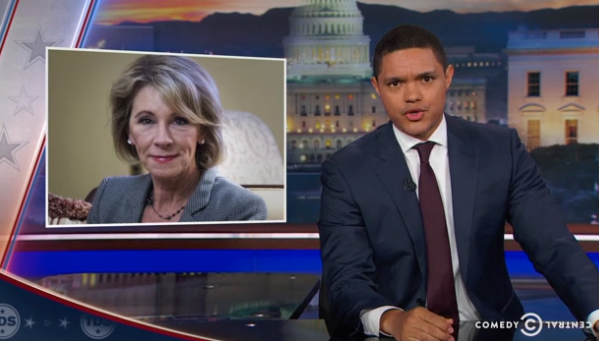 Betsy DeVos wants policies that will help bring to millions of others the opportunities she has had. That is what we conservatives are all about, expanded, extended opportunity for everybody to become the best they want to be. And Mr. Noah literally doesn’t know what he’s talking about. But he thinks he does. And he’s saying exactly what he’s supposed to say as a good employee over at Comedy Central.

We’re being guided by and governed by and limited by a degree of ignorance that’s hard to quantify, because it’s so unbelievably widespread. Just sheer ignorance that is the result of prejudice, bigotry, closed-mindedness, a lack of curiosity to find out what might be really going on anywhere. Instead, they descend into the comfort of the cliches within the cocoons they have built where they can feel unharmed.