RUSH: Now, here’s another little headline: “Black Lives Matter Co-Founder Appears to Label White People ‘Defects.‘” Story from the Toronto Sun: “A co-founder of Black Lives Matter Toronto argued that white people are ‘recessive genetic defects’ and purportedly mused about how the race could be ‘wiped out,’ according to a post on what appears to be her Facebook page. Yusra Khogali has faced increased scrutiny over the past year after [Black Lives Matter] Toronto gained political influence following their disruption of the Toronto Pride parade and confrontations with Ontario Premier Kathleen Wynne.

“On Friday, Toronto Police announced they would not participate in this year’s upcoming parade. This has been a longstanding demand of BLM [Toronto] and one that the board of Pride Toronto recently backed in a controversial vote.” Anyway, this babe has a track record of inflammatory, divisive… Why is that not racist to say? Why is there a serious news story about the intellect and the life and the policy positions of this nutcase? “Black Lives Matter Co-Founder Appears to Label White People ‘defects’ — Recessive genetic defect.”

Why is that okay? And, why, if somebody came along who was not part of Black Lives Matter or not a racial minority and began to poke fun at this woman, you know what they would be in for. Why is she allowed — and why is any racial minority allowed — to get away with this kind of thing? And then why is it that when certain white people react to it and fight back, they are condemned? I mean, is there no end to this? Did Canada have slavery? Does Canada have the original sin of slavery which permits a Black Lives Matter operative there to call white people “recessive genetic defects”? 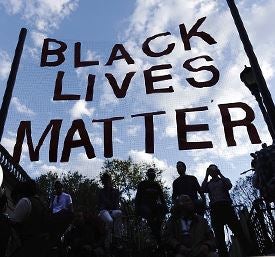 Yeah, you see, we’re just supposed to take it, accept it, smile, and move on — nothing to see here — because we’re supposed to be understanding, and we’re supposed to be bigger. But when does this stuff end? This is a serious story. It’s like an analysis of this woman, of her political life and her influence and her education and why she believes this and an effort to actually support the claim that she makes (from her perspective, of course). and yet if the opposite were stated by anybody, can you…? (chuckling) You don’t even want to think about what would happen.

I submit to you it’s little things like this that add up and add up, have a cumulative effect, boiling over, and nobody ever really knows why, except the people — the objects — of this derision, they hear it. They see it for years and years and years, and they see the imbalance in terms of coverage and treatment.