Sally Boynton Brown Is Back!

Don’t let ’em convince you of anything. In fact, if you can, laugh at ’em. Some of them are very violent and dangerous, I understand. But when you listen to things like this, this is why you really shouldn’t be afraid. You should, in fact, be comforted. This is a woman seeking the chairmanship of the Democrat National Committee. This was Saturday afternoon in Baltimore at the Candidates Forum for Democrat National Committee.

BROWN: This energy that has sprung up in our country — while it may be because we have powerful fear that we need to attack and push back on — is a reminder that we are a democracy, and we have the ability to do that, and we don’t need to push it down and construct it into anything.

BROWN: We need to let it continue to be organic and flow freely without putting restrictions and rules on it. We need to go ask them. We need to have the conversation with the millions of people marching. “What do you want from the party?” At the end of the day, what it’s gonna be is information, that they want to know when the marches are.

RUSH: Hurray! That’s… So this woman’s full of it, but this is our godsend. This is a woman who apparently has a pretty good shot at getting the job. Now, what did she say? (interruption) What, you don’t think that’s true? (interruption) Are you kidding…? (interruption) This woman is mainstream now. That’s the whole point. (interruption) I’ll let you hear Jim Webb in a minute. You’ll hear exactly what he’s talking about. But look at what she said here. “We don’t need to push it down. We need to let it continue to be organic and flow freely without putting restrictions.”

It isn’t organic. That is the point! They’re not… You know what they’re trying to do, folks? They are trying to say that this is the Tea Party, that this is their version… They are tantamount admitting that Occupy Wall Street was fake, because Occupy Wall Street was supposedly the reaction to the Tea Party. But now? “No, no, no. This is. This is the Democrat Tea Party.” Really? This is bought and paid for! That’s the thing about this, and you know where a lot of this is coming from? Can I tell you?

Barack Obama is encouraging this.

Barack Obama is instructing this.

Some of the money is coming from the Hillary Clinton campaign; a lot of it coming from George Soros and other Democrat donors. If they’re weren’t any money behind this, I dare say, over half of this wouldn’t even be happening. These people wouldn’t be out there unless they’re being paid. That’s what nobody will report. That’s what nobody will say. They want you to think that this is all organic, legitimate anger at Donald Trump. This is a lot of people being paid to go out and demonstrate. And this woman thinks this is the future of the Democrat Party, that these people…? What do they want from us at the DNC? Information! They want to know what the marches are.

Here’s the next thing she said…

BROWN: I am, by nature, an optimistic, positive person who fights for what I believe in.

BROWN: I’ve had to do some deep soul-searching in the last two months —

BROWN: — to say, “Okay, that’s still who I am by nature, and we also have this narcissist at the — the head of our country that we’re gonna have fight against.” What I know is that people who fight against do that really well. They know what they’re fighting against, and they’re very vocal about it. We’ve seen that in the last year. I think we’ve seen that in the last two months.

BROWN: And so what I’ve decided is, we need to give them the information that they need to keep fighting against and keep empowering them to that.

Now, who’s next? Raymond Buckley, who is also running. He was also at the same forum in Baltimore on Saturday, and he got a question from the Urban Radio network correspondent April Ryan. She said, “Ray Buckley, when will the DNC speak about what we are for, not just what we are against?” which is a dig at this Sally Boynton Brown babe.

BUCKLEY: My answer might cost me this race. I’m sorry. While many of you know that I’m openly gay, but what many of you don’t know is where I really came from, and that’s the lowest of the white working class. Let me tell you. When we’re running hundreds of millions of dollars’ worth of commercials telling the voters that, oh, our opponent is offensive. When you’re worrying about your damn paycheck, you’re worrying about your job, if your kids are ever gonna go to school, they don’t really give a crap about if the president is an insult dog. We did not offer a positive message to anyone that I’m related to. We did not offer a message to the people in Indiana or Ohio or Pennsylvania or Kentucky. What we did is we said, “How offensive.” Grow up.

RUSH: Yeah. Well, he’s right, but he’s so in the minority in the Democrat Party. Did you hear what he said? Well, this answer might cost me the race, meaning the job. I may not get the chairmanship because of what I’m gonna tell you. But he’s basically saying, grow up, stop being offended, stop marching, stop making fools of yourself, stop running around, “This offends me. This scares me. This frightens me.” Grow up. He’s basically saying, “I’m from the white working class and my own party punted me,” and he’s exactly right.

Let’s go to Jim Webb. He ran for the Democratic nomination, and he got out after two or three debates ’cause he realized he was with a bunch of communists and he didn’t feel at home. Now, he was on Meet the Press on Sunday talking about all of this, and here’s the first bite of what he said. 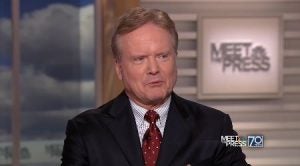 WEBB: The Democrats, first of all, they’re looking at 2018, and they don’t have a message. There is a campaign going on on the Hill, in the media, in academia to personally discredit not only Donald Trump, but the people who are around him, and, you know, the end result of this really is try and to slow down the process, is slow it down so that by ’18 when the Democrats are very vulnerable, particularly in the Senate, there will not be a record of accomplishment that they can run against.