Russian Spy Ships Are Nothing New

RUSH: This is Larry in San Antonio. Larry, welcome to the EIB Network, sir. Hello.

CALLER: Mega dittos, Rush, and thanks a lot for having me. I wanted to call you about the Russian spy ship that everybody’s all of a sudden breaking out in a sweat about. I was in the submarine service for 28 years, and every place we went leaving port there was a Russian spy ship that would follow us out until we dove. This is nothing new. Now the press is making it like it’s all Donald Trump’s fault that we have spies and everything else. And I’m really sick and tired of it. They’re not reporting the news correctly. 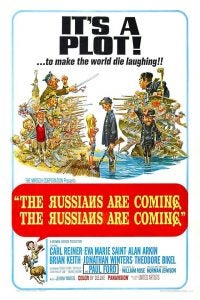 It was based on the fact that a Russian sub spying on us lost power. It was a comedy and they put ashore in some town in Maine and the citizens of Maine ended up loving the Russians and so forth. The Russians, they’d been lied to about what Americans were, and they couldn’t believe what they found when they actually came ashore in America. It was a funny movie.

But Russian trawlers and spies have been off the East Coast for years, 30, 40, 50 years. It is nothing new. The Drive-Bys are counting on the fact that the low-information voter doesn’t know this, and this is how it works. There’s a Russian trawler. It’s close to the East Coast of the United States. What’s it doing there? Now, what the media wants you to think, it’s either friendly, it’s there to protect Trump, it’s Putin looking out for Trump.

Or else, it’s Russia getting ready to launch an attack, collecting data on us, because they really wanted Hillary, and they know that Trump stole the election! Trump made it look like Russia helped him steal the election, and they don’t like being accused of this, and so the Russians are threatening America, and it wouldn’t be happening if it weren’t for orange head being in the White House. That’s what they want you to think.

Do you know the Russians, ever since Obama, and I think this might have even happened with Bush, the Russian primary delivery system in the air for bombs is called the Bear bomber, and it is a huge four-engine gigantic albatross of an airplane, and they’ve been flying over the U.S. close to Alaska, close to the U.S. border, they’ve been buzzing us easily for 10 years, loaded Russian Bear bombers.

It is Putin trying to recapture the glory of the old Soviet Union, which imploded, of course, with the fall of the Berlin Wall many, many moons ago. And so this is just Putin beating his chest, but the media, the media knows this, whether it’s this ship or others, the Russians have been trawling the East Coast. And, by the way, so did the Germans during World War II.

Did you know that there were actually Russian soldiers caught in Kentucky in World War II? “Well, hell’s bells, Rush. You mean there were Nazi soldiers in Kentucky?” That’s right. “Well, how’d they get here?” I guess they snuck in. The Russians have been trawling off the coast of the United States with ships like this for the longest time. The New York Times out there is having kittens over the claim the Russians are doing cruise missile tests in violation of the latest arms treaty. So are the Iranians! You know, the New York Times any day of the week is scared to death of nuclear weapons except when Iran’s on the verge of getting one and then they want to celebrate for some reason