RUSH: The New York Times had a story that ran I guess it was yesterday or maybe last night. I heard about it last night. “Conservative Talk Radio Stands by Trump Despite Turmoil.” I didn’t see the story. Snerdley sent it to me. “Between the resignation of his national security adviser and the revelation that his campaign aides and other associates had repeated contacts with Russian intelligence officials, it has been a tough week for President Trump.

“But if his supporters on the right were beginning to doubt him, there was no sign of it on conservative talk radio, where Mr. Trump’s contention that he was a victim of leaks and entrenched Washington insiders lit up phone lines around the country.” Then this. They quote me, but it’s a selective quote and they leave out the crucial thing in it, and that is what I was talking about! Here’s the quote that they published: “‘There is no evidence for the primary assertion that is driving this entire attack on Trump,’ Rush Limbaugh, the prominent … radio host, said …

“‘This attack is coming from the shadows of the deep state, where former Obama employees remain in the intelligence community.’ In another accusation, [Limbaugh] said, ‘They are lying about things, hoping to make it easier for them and the Obama shadow government to eventually get rid of Trump and everybody in his administration,'” and that’s it. So they quote me saying, “There is no evidence for the primary assertion that is driving this,” but they never mention what I identify as “the primary assertion.”

That is a fraudulent, phony assertion.

There’s no evidence, there has never been any evidence.

They have looked. It turns out Obama has been investigating Trump since before the election on this stuff! Why, by the way, was he doing that, if they thought Hillary was gonna win in a landslide? Why were they investigating Trump? But they were! We’ve learned that in a news story. Obama was investigating Trump and ties to the Russians as far back as early October! The point I made yesterday was: There is no evidence. The primary thing that fuels this — the energy that’s fueling all of this stuff on Flynn — is that the Russians hacked the election and cheated and determined the outcome guaranteeing that Hillary lost.

I think it’s kind of important, New York Times, if you’re gonna quote me, to put what I’m talking about in the quote.

RUSH: Jeff in Kansas City. Welcome, Jeff. Great to have you. How are you doing?

CALLER: I’m fantastic, Rush. Thanks for takin’ the call.

CALLER: Hey, just telling… You were talking earlier about how you were quoted in the press in regard to them not having any evidence against Flynn in regard to calls that he had made. I think the one important thing you missed was that they also did not point out that you were quoting the New York Times when you did that. 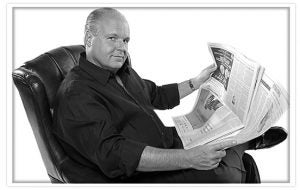 RUSH: That’s an excellent point. That is a superb point. He’s exactly right. What he’s talking about… Thank you, Jeff. I’m being short here ’cause Trump may come out at any moment. The New York Times has a story, “Conservative Talk Radio Stands by Trump Despite Turmoil,” as though we’re it. Trump’s got nobody else but me and a couple other hosts. That’s it. Everybody’s abandoned Trump. Trump’s got nobody left — except, of course, me. Damn it.

And then they quote me as saying, “There is no evidence for the primary assertion that is driving this entire attack on Trump. This attack is coming from the shadows of the deep state, where former Obama employees remain in the intelligence community.” They never identified what I was talking about. What I was talking about was this idiotic assertion that the Russians and Trump worked together to hack the election, guaranteeing that Hillary would lose. Jeff’s point is, that’s the New York Times story. It’s the New York Times story that I was objecting to and disagreeing with and blowing up.

And so I’m gonna ask my question again. All of this time, October, early part of November, September, they thought Hillary was gonna win. They had their own polls. They believed every poll that they produced that showed Hillary was up by five, up by six. They were ignoring every bit of evidence that Trump was doing well, and they literally thought this election — even nine o’clock on election night they still thought and Hillary thought she was gonna win.

So in the midst of this confidence they’re gonna win the election, why in the world were they investigating Trump? What is the point? There has to be a reason why they were doing it, and I’ll… The fact that they’re liberals and they want to destroy political opponents, that’s a big factor. Investigating Trump and coming up with something to ruin him sends a signal to any other Republican or anybody else that might someday think about running against the Democrat Party.

CALLER: Hello, Rush. Thank you for taking my call. I have a quick question for you. You said during the transition that we’re living in very precarious times and Trump can’t go out and knock Obama personally. Now with all that’s been revealed and as you’ve pointed out this Obama shadow government — which is beyond leaks; it’s deeper than that —

CALLER: — do you believe it’s time for Trump to take off the gloves and go after Obama personally?

RUSH: Not until they can actually find Obama fingerprints. You know it’s Obama, you know that he’s there, you know that he’s got these 250 organizations, you know George Soros. But if you’re gonna do that, that’s akin to going after the king. Not that Obama’s still president, but you’re going after the guy running the Democrat Party. You better be able to have without doubt evidence. You better have conclusive evidence. There’s another way of doing it, though, without doing it that way. But the one thing…

My buddy Andy McCarthy of National Review wrote a huge piece that has a central theme, and it is this: That Trump should release the transcript of the phone call between Flynn and the Russian ambassador. ‘Cause I’ve got two more stories here today at the top of my Stack, of the Flynn Stack — two more stories, NBC and NPR — both quoting intelligence officials admitting they have no evidence to support the “fact” that Trump was working with the Russians. They have no evidence that the election was actually hacked.

I mean, they’re tapping and monitoring his phone calls, and that’s how they heard about this, and what it looks like is that the Russian ambassador kept bringing things up and Flynn didn’t commit to anything. But they were able to say Flynn was “discussing” with the Russian ambassador. This whole thing, folks, is just dirty, filthy. But they own the narrative on it. They’ve been able to create this narrative, but now in the aftermath, here come these two news reports: No evidence that this happened. No evidence here.

If they release the transcript of that tape and everybody can read it and hear it and discover that there was none of what has been alleged, that would be the same as exposing, not maybe Obama, but the shadow government, people that are out there doing what they can to undermine Trump.