Celebrate the Presidency with Rush Revere!

RUSH: I want to remind you of something. We had a couple of calls yesterday about the Rush Revere Time-Travel Adventures with Exceptional Americans book series. This is the Presidents’ Day weekend, and the most recent Rush Revere Time-Travel Adventures with Exceptional Americans book is Rush Revere and the Presidency. Folks, I have to be honest, I have to tell you, we hear from people, children all over this country, families who are encouraging me to mention the Rush Revere series more often than I do, and I probably should.

But I’m just trying to budget everything and be as — here’s the word — diverse. I’m trying to get as much into this show each and every day as I can because there’s so much happening, and I feel a compulsion every day to make sure certain things are mentioned. Some days I don’t take enough phone calls. Some days I don’t mention this enough. Some days I don’t get to that at all, whatever it is. And people say, “You know, you really got something great. You need to be talking about it more.” And I agree. I agree. I don’t always get the chance ’cause all the news is constantly breaking, I mean, literally breaking news constantly now.

But I tell you, since this is Presidents’ Day weekend, Monday is Presidents’ Day, I’m gonna mention this. The latest book in our New York Times best-selling American history series is Rush Revere and the Presidency. What we have discovered here — and you’ve probably heard parents calling here to share these stories — children that normally don’t like reading and certainly are not interested in history have become devoted to this series. They have become absorbed. 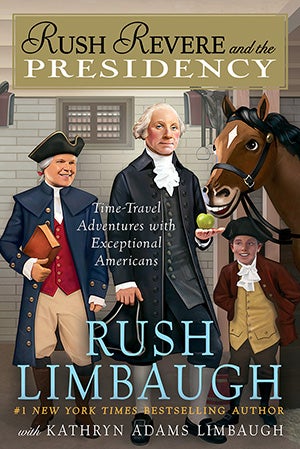 We got an email the other day from a family describing how a couple of their kids hide under a blanket at night with a flashlight to read after they are supposed to be in bed. Parents tell ’em you gotta be in bed by X, so they go in the bed and they get under the cover with a flashlight and are reading the books. The parents discovered it and wanted us to know that. And we’re talking about 10-year-olds here who are staying up past curfew to read the Rush Revere Time-Travel Adventures with Exceptional Americans series.

You know why? Because it’s not just history. Because of the usage of a vehicle here called time-travel talking horse that can time travel back to anywhere in American history, the students, readers are taken to these events about which we write, and they experience them. They’re not just told about them, and they’re not just spoken at; they’re actually transformed as part of the story to the events that we depict.

And in this book, Rush Revere and the Presidency, I’m Rush Revere and I’m a substitute teacher in a place called Manchester Middle School and my hilarious sidekick is a smart aleck talking horse named Liberty. He can talk ’cause he was struck by lightning when he was young. And he can time travel. He can only go to American history, but he can time travel. He can take students with him from Manchester Middle, and they go back in time. And that’s how they learn about American history.

And so the short version of this is that we travel back in time to meet George Washington and John and Abigail Adams. And old Cam witnesses George Washington’s inauguration speech, talks to him about why he ran, why he didn’t accept king, why he left office, the whole thing about what being president of anything really is and why seek it. And we made it a point, by the way, to include Martha Washington and Abigail Adams in this book so that young girls reading it would have things — ’cause they were important figures.

Martha Washington and Abigail Adams were huge, important figures in American history, wanted young girl readers to be able to relate in that way. But it’s a perfect way for young readers to learn and understand how our presidency started and the man who was the first president and how his morality kept this from becoming a monarchy and how it all works today. So this book was released back in latter part of November. We wanted to wait ’til after the election crush. And it’s at Amazon, Barnes & Noble, Books-A-Million, retailers all over the place.

And I have to add, we post great photos all of the time at Rush Revere’s Facebook page. You’ll see recent scholarship winners, amazing comments, Liberty the talking horse really wants you to like his page there. The guy’s got an ego that’s out of control. I mean, if you were a horse and you could talk and time travel, you — you’d have a big ego, too, and Liberty does. He wants lots of followers. Facebook.com/RushRevere — and there are four other books. The first one is Rush Revere and the Brave Pilgrims, and they’re just all works of art, the illustrations.

And they’re serious books. They’re not little picture books, color books for little toddlers. I mean, these are books that accept and understand, promote the maturity and intelligence of young readers who actually want to learn American history. In fact, here, I can show you the latest book. Here it is. I’ll flash it on the Dittocam. That is the cover of the Rush Revere and the Presidency. I don’t have time to zoom in on this. I’ve only got one hand here to do this with, but that’s it. You can check it out. What a timely time to mention this.

Now, a brief time-out here. We will come back. It’s Open Line Friday. We’ll get back to the phones. What else do I have here? Oh, yeah. I want to remind you something from the New York Times back in August of last year.