RUSH: We’ve got Steve in Manhattan Beach, California. Great that you called, sir. Welcome to the program.

CALLER: Thank you so much. An extraordinary honor to talk to you. I am 67 years old and I was born and raised in Greenwich Village, New York, went to school at the Little Red Schoolhouse, a lily white private school, during the height of the McCarthy period, so my —

CALLER: Eugene, I was in New Hampshire for that winter, but —

CALLER: What I wanted to say, Rush, is that Donald Trump was someone who was on my radar as a New Yorker back in the seventies and he was sort of a, you know, clownish figure to me who I completely ignored and never have watched an episode of The Apprentice or any of those other things. But I truly believe, Rush, that we are witnessing what I am now starting to call Donaldus Maximus. I think this man is truly going to save this country. I feel that my grown children now have an opportunity to live in the kind of limitless republic that I was fortunate enough to be born into in the fifties and sixties and so on. So I just wanted to ask if you feel that we can begin to call him that. 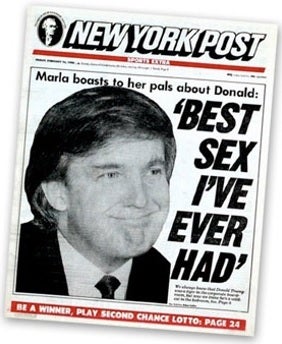 RUSH: Donaldus Maximus. Before I answer that, can I ask you what really brought about the change of heart? I mean, look, I moved to New York in 1984, is that right? No. In ’88. I was there when the Marla Maples thing happened and Trump on the front page smiling ear to ear with Marla Maples having the quote, “Greatest sex I ever had.” Cindy Adams was the local Donald Trump expert. Cindy Adams knew what Donald Trump was gonna do before he did it, ’cause I think Trump called and told her. And he was a character then. You know, he was a larger-than-life character then.

And I actually got to know him shortly after moving there. It’s a long story, but Al D’Amato called him to ask him to show me an apartment in Trump Tower. That’s how I got to know him. You were there in years prior to that, and you’ve always thought of him as a funny guy, a joke, didn’t take him seriously. I mean, what changed? I mean, even after his campaign began you probably weren’t on board. What changed?

CALLER: Well, that’s true. I was a Cruz supporter and in watching this man evolve, and truly to me, even in the 26 or seven odd days he’s been president, it’s almost breathtaking to watch the evolution as he begins to understand fully what he’s up against and what he has the power to accomplish.

RUSH: You’re not worried about any of the press criticism? That hasn’t served to weaken your resolve?

CALLER: I watch on Facebook most of my friends — I’ve lived in California now for 40 years, but most of my friends still live in Greenwich Village and are hair-on-fire Democrats who think that the world — Henny Penny, the Henny Penny crowd is, you know, just beyond any kind of reasonable behavior. But, no, I’m not worried about that because I really believe that he is taking the measure of this country and really understands how desperate the situation has become.

RUSH: See, and thank you. ‘Cause I think this is pretty close to what your average Trump voter thinks. Now, let’s talk about Trump voters for just a second. Let me ask all of you a question. What’s the number of votes Trump got? Okay, 63 million. And what percentage of the vote did he get? 46? 48? I forget what it was. Are all 63 million, did you say? Or 60, 65, we’ve got a ballpark number. Are all of them just dyed-in-the-wool, pedal-to-the-metal Trump supporters? Or are some of them the kind of people that just hated Hillary and there was no way no matter what, and Trump was the alternate choice?

In other words, what percentage or what number of that 65 million do you think are all-in Trump, love Trump, going to the rallies, think Trump’s the answer, can do no wrong, they don’t care what the media says, what percentage of the Trump — (interruption) You think it’s less than half? Mr. Snerdley weighing in thinks it’s less than half. So you think that of the 60 — let’s use the number 60 million that voted for Trump, let’s just say 32 million are not that crazy about him?

You don’t think they’re disappointed? (interruption) You don’t? Oh, so you think — interesting. I would have expected you to say that the 32 million that were really not crazy about Trump, they were more anti-Hillary, are now really scared and worried, this is not at all, oh, my God, this embarrassing, you think Trump is growing them? You think Trump’s growing so that that number of percentage of 60 million that voted for him is getting closer and closer to all of them being all-in?

He said, all right! ‘Cause he was worried. He was afraid that that was the attitude of a lot of people. And this is why, here is this guy on the phone here from Manhattan Beach, former New Yorker, and he doesn’t care about any of — my point, the media has this way, it’s a formulaic blueprint for destroying politicians they don’t like. Most of them are Republican. Occasionally there will be a Bob Torricelli that they go after, but for the most part they have a blueprint and a formula for destroying Republicans. And it always works.

And the blueprint relies on a wide universe of the American people believing what they see in the media. And whenever these narratives build, they just catch the wave of momentum and inertia, there’s no resisting it. But Trump doesn’t fit the blueprint. Trump doesn’t fit the formula. The media doesn’t know how to take him out. And I’m gonna tell you what I think. I think the more of this stuff they try, the more it’s going to backfire on them.

Go back before the presidential campaign. You know, how long did we talk about it here, that the real frustration we had with Republicans in Washington was they didn’t see any crisis out there? They didn’t see any death spiral the country was in. They thought we were kooks! They let they were nuts believing in conspiracies, and yet the people living out in the country that are not protected by all the economic security and other kinds of security inside Washington, New York, Boston, or whatever, are living it every day, they see it happening every day.

And they see the people responsible for it continuing to add to what was doing irreparable damage, largely opening the borders of this country to noncitizens, putting ’em on the welfare rolls, and calling it immigration. That just sent them over the edge, and they said, “We’re gonna lose the country if we don’t get a hold of our immigration laws and enforce them and if we don’t start assimilating people.” And they saw Washington, official Washington totally uninterested in any of that. And we voiced these concerns to Republicans and others in Washington and they, behind our backs, laughed.

(haughty chortling) “These guys really think there’s a crisis out there!”

So I tell you, the disconnect here is wide, and there’s not much linking the disconnect. I mean, there’s very little commonality for there to even be a bridge between these two disconnects. And I just think the more the media uses their time-honored blueprint techniques to destroy Republican politicians… It hasn’t worked on Trump yet, and they’ve been trying it a year and a half, folks. We’re dangerously close here to the definition of insanity: “Doing the same thing over and over again, expecting a different result.” It’s not Trump who’s insane. Trump’s having the time of his life.

RUSH: Fox just did a little segment on-the-back-and-forth, Trump and April Ryan yesterday at the press conference, where she asked him if he was gonna have the CBC come to whatever he was gonna do on reviving the inner cities and Trump said (paraphrased), “Well, hey, you know ’em? You can set up the meeting?” Everybody’s saying, “That’s racist! That’s racist! He said that because she’s black and therefore they’re black and he thinks that she knows them, and therefore… and therefore…”

I’m sorry, it isn’t gonna fly, media. You can’t get… That might work on somebody like Ted Cruz, it might work on any other Republican, but not gonna work on Trump. Nobody who saw that thought it was racial. They thought it was funny. There’s a journalist. “You want to set up a meeting? I’d love to meet ’em. You want to do it?” And of course the Congressional Black Caucasians said, “Well, we sent you a letter and you didn’t respond to it.”

And the White House replied, “Well, we remember you boycotted the inauguration!” Let’s not forget that. The Congressional Black Caucasians didn’t go to the inauguration. Anyway, that’s a… (sigh) Nobody saw racism. I’m gonna tell you, I think a lot of people… Snerdley, I think a lot of people who saw that press conference and are not big time Trumpers loved it for a whole host of reasons.