“Many of those let go were on the building’s seventh floor — top-floor bigs — a symbolically important sign to the rest of the diplomatic corps that their new boss has different priorities than the last one. The staffing changes came as Tillerson was on his first foreign trip — attending a G-20 meeting in Bonn, Germany.”

It took me the longest time as a young person to figure out what the Department of State meant, what it did and all that. And then the same thing at the Pentagon. And the only government agency I was ever, you know, curious about was the IRS. But everything else I just assumed that there was an identifiable and common patriotism among people that worked there. The naivete was my belief that all Americans love America. My naivete was that all Americans appreciate the achievements and accomplishments of the United States in becoming the force for good in the world, becoming the real lone superpower in the world, the bastion and beacon for freedom. And I can remember when I learned that wasn’t true I was a combination of disappointed and shocked.

Now, this is not recent. I’m talking 30 years ago, but I was still an adult. I remember being shocked when I was told the lay of the land, told the truth that there are people in the State Department who want to undermine Republican presidents. There are people in the State Department who do not think the United States is the solution. And it’s all been part of my self-education and awareness project about liberalism, because the learning, the education, the becoming informed about these various intricacies and involvement have coincided with what I’ve learned about liberalism.

And so even though I knew, even beyond the days of my naivete, when I had awakened and discovered what really was going on in parts of these agencies — it was the same time I learned that not every general in the Pentagon wants to win wars. Some of them don’t want to fight ’em. Some of them, I mean, they’re politically correct generals and they want to climb the ranks by engaging in whatever political objectives their superiors have, whether they’re good or bad for the United States.

And then you have the warrior generals. I thought they all were, back in my days of naivete. It just didn’t compute. When I first realized this, it just didn’t compute that we actually would have, given how many people live in America and the pool of people to choose from, to go out and find the absolute best who believe in America, the fact that we populated that place with people who didn’t, why would anybody do this? I started ask all the obvious questions that people were on the cusp of learning things that shocked them. I went through all of that.

And then the next stage was, “Well, why don’t we get rid of those people when we acquire power?” Why would, say, an incoming Republican president keep people in the State Department who are there to actively undermine his agenda because they disagree with him politically and who believe the United States is the problem in the world and not the solution, or people who believe the United States has caused so many problems. That we owe the world so much because of how much we’ve screwed people, we’ve mistreated people, we’ve stolen resources, whatever it is.

I never understood why. Like when Bush, George W. Bush after he was inaugurated in 2001, because the acrimony of the Florida recount and the massive disputes over the legitimacy of his win, remember that one, they said the Supreme Court stopped the recount when Gore was on the verge of pulling ahead, and they still to this day believe that. I mean, I understood, part of me, why Bush didn’t clean house, because he was trying to show that he was going to be president of all the people, and he was going to demonstrate that he could be a compassionate conservative and work with everybody. 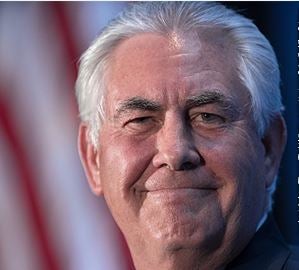 And it came back to bite him. I mean, look at administration. The guy was undermined daily by his own government. Intellectually this has just been one of the hardest things for me to understand, and I’ve asked people who are very close with that world, and they’re not nearly as surprised by it as I am, ’cause it’s where they live, it’s what they do. It’s just the way Washington operates. So this is a long way around to telling you that when I see this headline, “It’s a Bloodbath at the State Department,” my reaction is, “Finally. It’s about time.” So here we have Rex Tillerson, who’s the new secretary of state for Trump, going in there and they’re weeding out all these people that they can identify who are gonna be standing in their way.

They have every right to do this. I don’t care whether they’re shadow operatives from the Obama years or the Clinton years. I don’t care if they’re career appointees, get rid of them, give them their pensions or whatever they get, but get rid of them. Get your own people in there. I’ve never understood why the Republicans do not take that all the way, and I’m happy to see it here, because this is the battlefield on which we are waging war.

And the Democrats do this. Democrats assume power and the first thing they do is go through the Department of Justice and find out who’s gonna be standing in their way, and they get rid of them. Remember J. Christian Adams? He ended up resigning when Eric Holder said there aren’t gonna be any prosecutions of the New Black Panther Party, and there’s obvious voter fraud in Philadelphia because “there have been too many prosecutions of my people,” Holder said, or something like that, so we’re gonna cut ’em some slack. And it was his division in the Justice Department, J. Christian Adams, that was doing the investigation, so he resigned, and he made no bones about why.

So the Democrats do this constantly. They get rid of the people at the Pentagon. Bill Clinton came in and fired every U.S. attorney in 1993. So it’s a long way around saying this is a good move and it’s overdue. And I think it’s another bit of evidence the things that Trump and his people are doing that just have the Washington establishment livid, just livid.