RUSH: Scott Pruitt was confirmed. Scott Pruitt was confirmed as director of the EPA, a guy who once stated he wanted to get rid of it. Now, what was happening today: “Employees of the [EPA] have been calling their senators to urge them to vote on Friday against the confirmation of Scott Pruitt, President Trump’s contentious nominee to run the agency.” This is the New York Times, which describes this as “a remarkable display of activism and defiance that presages turbulent times ahead for the EPA.” 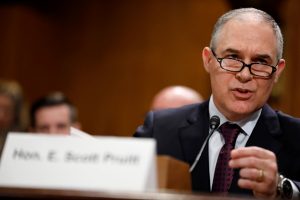 So the underlings with the EPA were calling the Senate, “Please vote against Pruitt! Please vote against him.” And the New York Times characterized it as “a remarkable display of activism and defiance.” “Many of the … environmental lawyers and [wackos] who work in E.P.A. offices around the country say the calls are a last resort for workers who fear a nominee selected to run an agency he has made a career out of fighting…” I hope we soon see a headline like we saw today about the State Department.

Rex Tillerson is cleaning house at the State Department. Anyway, this “remarkable display of activism” did not prevent Pruitt from becoming confirmed as director of the EPA. But… Well, I don’t know. Maybe active on the unemployment line. Depends. Some of them are gonna quit in protest, but there’s gonna be a lot of them stay and try to undermine things. You think there’s not an Obama deep state at EPA?

There sure as hell is. That’s where climate change lives. I’m telling you. They’re probably even more radical and… and — I was gonna say “vicious” — radical and committed at the EPA than they are at the intelligence agencies, in terms of Obamaites and Clintonistas. We’re gonna have to keep an eye on this EPA. There’s gonna be hell’s a popping there, you watch.