RUSH: Kevin in Long Island. Great to have you, sir. Glad you called.

CALLER: Hello, Rush. It’s quite an honor to speak with you. 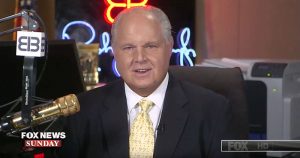 CALLER: On Sunday your interview with Chris Wallace on Fox was positively stellar. I was amazed at how well-spoken you were and how perfectly you got your points across, but I just couldn’t understand why Chris Wallace was so uppity with you during that interview.

RUSH: Wait, wait, wait. Why were you surprised that I was so well-spoken?

CALLER: Oh, no, no, no. I was more surprised at Chris Wallace being uppity with you. No, I was complimenting you on being well-spoken and —

RUSH: I know. It sounded like it was kind of a surprise.

CALLER: No, no, no. In fact, I wish you would be on television a lot more.

RUSH: You know, I can’t tell you, Kevin, how many people are telling me that.

CALLER: There is a need for you.

RUSH: I got an email from my old buddy in Sacramento, Stan Atkinson, who was the leading 5 p.m. and 11 p.m. news anchor in Sacramento at KCRA when I got there in 1984. This guy had fifties, his ratings were in the fifties, he owned the town and we became friends, and we still are. And he said, “You gotta put aside whatever you don’t like about TV and you gotta get back on. You’ve never looked better on TV. You know, graying at the temples there, it just all adds up. You just look good,” which we all know matters on TV, but man, he said what you said. “You got in, you got it, you got out, you were disciplined, you were well-spoken.” And I wrote him back, I said, “Stan, do you realize makeup took longer than the segment?” Which it did.

CALLER: But it was worth it. (laughing)

RUSH: My studio was torn up for two hours in order to set up that little 13-minute segment.

CALLER: But it’s well worth it. 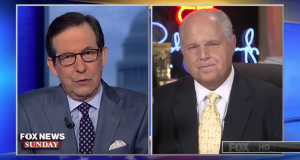 RUSH: And I said Stan, “I’ve never gonna have the 14-inch part in my hair that you still have.” You know, that’s a requirement for being a news anchor. You gotta have a 14-inch part in your hair. If you don’t have that, you’re gonna be a reporter at best. But, as for Chris Wallace, Kevin, he was nice as he could be. He always has been. What happens, he wants to keep the interview moving, and he wants to be able to ask me about as many different things as he can, and 13 minutes is a limited time frame.

I usually take 13 minutes just to say hi when the program opens here on the radio. And he asked me, “Would you please tell your audience I’m not interrupting you? Would you please give me the papal blessing that I’m not interrupting you? I’m trying to move you along so that you can say even more.” And that’s what he’s trying to do, and I agreed to it up front. So that’s why, when he was interrupting me, I knew what he was doing, that’s why I waved him on it, “Okay, next question, I’m ready for you.” I appreciate your thoughts. I really do. Really do. Thank you. (interruption) Oh. Oh. What? Oh, he has a question about advertisers. What’s the question about advertisers?

CALLER: I noticed that very few of the conservative spokesmen and women rarely ever touch on the bias that exists between advertisers and the conservative the media. There are certain corporations that you will never see advertise on Fox, for instance.

CALLER: But they’re all over the liberal media.

RUSH: Right. Why do you think that is, Kevin?

CALLER: Well, they’re trying to appeal to a particular audience, but they’re missing out on the other, what I guess is half the — 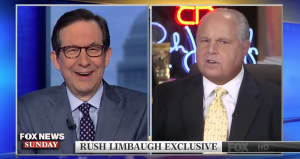 RUSH: No, that’s not what they’re doing. They’re trying to stiff Fox News out of money.

RUSH: Television advertising is a different bailiwick than the way we sell advertising here. It’s a totally different thing. They sell what’s called CPM, cost per thousand. And they do some direct result, meaning TV spots with an 800 phone number or something that they can measure and media reaction, response. They’re basically doing CPM, cost per thousand, meaning trying to reach as many people as they can with just a brand name or just a generic message.

But advertising agencies have what are called media buyers, and they come out of universities and they’re largely liberal, and they’re in the basements of agencies, and they have the budgets, and they determine where the money for any individual client is spent, and they will go with their political choices. This is not supposition. This is my business. This I know. Many of them are young women, and if somebody on the network is pro-life, I guarantee you that media buyer is gonna be hard-pressed to give any advertising revenue to that broadcaster. It’s the way it works.