RUSH: Tammy in Long Island. Hi, Tammy, great to have you with us.

CALLER: Thank you so much. I’m really nervous. I just wanted to call —

CALLER: Because I’m a huge fan of yours, and — I don’t know. I’m usually pretty quiet when it comes to politics, but I guess lately I’ve just become really, like, with the election and everything, just encouraged but also kind of right now a little discouraged by everything that’s going on.

RUSH: All right. Well, as far as the call’s concerned, don’t be nervous. It’s gonna end up feeling like you’re having your back rubbed with a mink glove. Don’t sweat it.

CALLER: Well, I just wanted to call in because yesterday you were talking about Milo Yiannopoulos. And I’m a huge fan of Milo. I’m a Millennial conservative. And I feel like Milo Yiannopoulos is kind of the voice for the young voters in this country who are conservative and support Trump. And I feel like the treatment he’s been getting is really unfair. And also I wanted to say, you know, to the members of the audience who weren’t familiar with him until, you know, this story broke, he’s very intelligent. 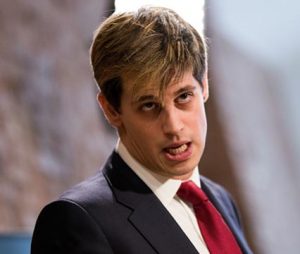 His message is all about freedom of speech and having the right to voice your opinion no matter what, if you’re Republican or Democrat. And I feel like I’m a little upset because I feel like he’s been getting, you know, a lot of, like, a bad rap. And even the right has kind of mistreated him. Like they didn’t give him a chance, really, after what happened to explain or even release a statement on it. And I don’t know if you watched his press conference yesterday on what happened, but I just wanted to say that he’s very important to I think the conservative movement in the country, especially among young voters.

RUSH: How would you compare him to, say, Lena Dunham on the left?

CALLER: Well, I’m not saying that what he says is right. I mean, he’s definitely speaking as a victim, but I think in just comparing him to Lena Dunham where she wrote in her own book, you know, some things that I think were inappropriate and no one really held her accountable, and she wasn’t even put in the position to really explain what she wrote.

RUSH: Nobody’s ever gonna hold her accountable. She’s a liberal and she’s a woman and so she’s doubly indemnified against —

RUSH: — any serious analysis of what the hell she says or thinks. It’s a clear example of the double standard out there, Tammy. I mean, this woman makes up being raped or something at Oberlin College and then she did commercials for Hillary so she’s a darling, she ran that TV show at HBO. HBO’s a left-wing enclave. It’s worshiped. And so she benefits from that. The left defends their, whatever you want to call, partisans, activists or what have you.

Now, I think CPAC, by inviting Milo, was an attempt to reach out to Millennials. I mean, they know. I know plenty of young people that think Milo is great, love Milo, admire Milo, think he’s courageous doing what he does. I think where the bridge was crossed here, Tammy — and I say this from afar, I think once you even wade into the water on, even if it’s just alleged pedophilia, you’re gonna run out of people to defend you.

CALLER: Right. Like I said, I’m not condoning what he said, and I think he even took responsibility for what he said and the poor choice of words he used for it, but I mean, like I said, there are other examples on the left where this has happened and nothing’s really come of it. Like Lena Dunham or Roman Polanski. And, like, if Milo was, say, a Democrat, I think they would be protecting him, they wouldn’t —

RUSH: Fabulous lesson you’re learning here of the double standard. You hit the nail on the head. If Milo were a liberal, he could say whatever and then some, and he wouldn’t be addressing CPAC, he would be emceeing the Oscars.

CALLER: Right. And I guess, you know, after a while people like me, they get fed up because it’s, first of all, being surrounded by fake news, and now seeing someone who is trying to change the conservative movement and make it more — trying to give it strength almost in a way by going out there and saying what’s on his mind, not being afraid to speak and seeing how the media’s trying to take him down.

RUSH: There’s an actor that used to be on Star Trek, George Takei, and he brags about his sexual experiences with much older men who taught him how to do it and comforted — That’s essentially what Milo said that had him disbarred, disbanded, what have you.