GOP Govs to CPAC: Get Out There and Match the Energy of the Left!

RUSH: Now, at CPAC today, there were some governors that spoke. Doug Ducey of Arizona, Sam Brownback of Texas, Scott Walker of Wisconsin, and Matt Bevin of Kentucky. And they had a message. (interruption) What did I say? (interruption) I said Kansas! I didn’t say Texas. I know Brownback’s from Kansas! Did I say Texas? (interruption) Well, for crying out loud. I didn’t say Texas. Texas is not even on this page. All right. Doug Ducey from Alaska, Sam Brownback from Texas, Scott Walker from New York, and Matt Bevin of Hawaii. 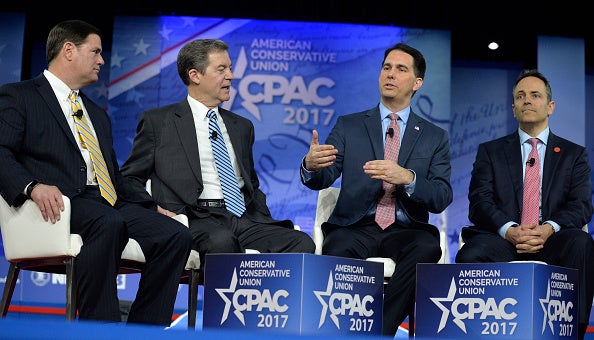 Those governors. (laughing) Anyway, you know what their message was? They said, “You people here at CPAC? Get off your chairs and get out there! You can’t just rely on the fact that we got a Republican in the White House and Republicans running Congress. Have you seen what the left is doing? You have got to get out there and maintain every bit of the energy you had during the campaign.” That’s what they said. Here’s Brownback, governor of Texas. He said… (chuckles) I know it’s Kansas. I’m just having a game here with Mr. Snerdley.

He said, “You have got to match the energy on the left with the energy from the right. We gotta push; we gotta push aggressively. There’s a lot of motivation out there. We’ve gotta match it side to side.” Scott Walker said the same thing. He said, “It is a unique opportunity in time to have transformational change. We can’t just be satisfied with saying, ‘We have a Republican in the White House, Republican majorities in Washington and the states.'” The thing is, this is not what conservatives do, Republicans do.

They don’t go to the protest march; they’ve got jobs.

And we don’t hire protesters.