RUSH: Trump had a meeting this morning at the White House with a slew of manufacturing CEOs. I think it’s still going on. If it’s not, it went on for hours. Trump loves these meetings. He gets a lot done at these meetings, and in the part that was televised… You know who Jeff Immelt is? He’s the CEO of GE who really, really, really, really got close in there and tight with Obama. So at the beginning of the meeting when the cameras are allowed in, Trump made Jeff Immelt describe the time he saw Trump hit a hole-in-one.


“You tell ’em, Jeff! You tell ’em! Trump hit a hole-in-one. You were in the group; you saw it. You tell ’em how it happened.” Trump said that before he hit the ball he said, “I’m the best golfer of all the rich people,” and he swung and hit a hole-in-one. Now, I can attest to you that this kind of thing happens. When playing golf with Trump, you hear about how great the golf course is and how it’s better than anybody else’s golf course no matter what you’re talking about. Augusta, Pebble Beach, it doesn’t matter.

I said, “You got something in the ball? It’s your golf course. If you got a magnet in that ball and there’s a magnet…”

“How dare you accuse me of that! No, that’s a legitimate shot. You tell ’em you saw it.” 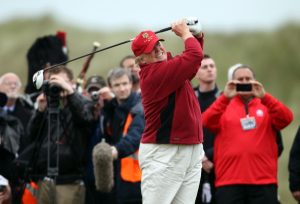 The whole round is that way; then he sees somebody he knows on another fairway. It turns out … (laughing) Excuse me. The CEO of Macy’s happened to be on a parallel fairway, so Trump sees the guy, says can be come over here, come over here, and he introduces me to the CEO of Macy’s, and the CEO of Macy’s walks away; goes back to his group. Trump, “If you ever need a couple mil’ in quick advertising, call the guy; he’ll help you out. Whatever you need, just tell him I told you to call,” and then at the end of the round there’s some guy walking around.

“See that guy? He’s the richest man in Italy!”

He calls the guy over, introduces the richest man in Italy, then takes me out to show the guy’s car to me. I mean, for 18 holes (laughing) it never ends. My point is, I could believe the story. (interruption) Well, no, this — when I played golf with him — was years ago, long before this current iteration of Trump. I’m just telling you: The story where he makes Immelt tell the group he saw Trump hit a hole-in-one? (snorts) I totally believe that it happened.