RUSH: Now, you see, this is how the Drive-By Media works. So we had the tweet that Bob Creamer’s group somehow got into CPAC and passed out a bunch of little flags that looked like the Russian flag and people are waving them around, and that gets tweeted out. And O’Keefe comes along and says, “No, no, no. Robert Creamer’s group,” we just explained who that is, “got in there and gave these things out.” Anyway, TheHill.com: “CPAC Attendees Seen Waving Russian Flags.”

Crowd at CPAC waving these little pro-Trump flags that look exactly like the Russian flag. Staffers quickly come around to confiscate them. pic.twitter.com/YhPpkwFCNc

From the Raw Story: “CPAC Scrambles to Control Damage After CPAC Waves Russian Flags.” This is from another website, The Week: “CPAC Attendees Wave Russian Flags Ahead of Trump Speech.” It didn’t happen. Totally planted stuff. The Drive-By Media probably knows it’s fake and a sabotage attempt. Doesn’t matter. It’s all about perpetuating this silly idea that the Russians actually are the reason Trump is president.

RUSH: What happened was these little flags they had, they were branded with “Trump” on them, and they were the Russian flag, and they were manufactured by a Democrat hate group, because that’s what the Democrat Party is. The Democrat Party, my friends, is the largest hate group in the country. Bar none. So, anyway, they pass these flags out, and they’ve got “Trump” on them. They are facsimiles or replicas of the Russian flag, and people are waving them around and so forth, and then here they come and they come confiscate them because they’re plants.

It’s a good trick, don’t misunderstand. The problem here is there’s coordination between the guy who planted the flags and the media. The media is reporting this as though these Trump people were eager to wave Russian flags, because don’t you know there’s a connection between Trump and the Russians, and everybody that voted for Trump knows if it hadn’t been for the Russians, why, Trump would have never been elected. This is the big lie. 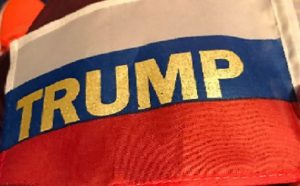 The big lie that is making all of this, all this protest at the town halls, all of this anger in the media — every bit of opposition to Trump — is rooted in this false premise that the Russians prevented Hillary from winning by cooperating with Trump and that he welcomed their help. It’s a big, total lie, and it is the fuel for every story that the left is running against Trump and it’s the fuel for all of these protests against Trump in the streets, at town halls, you name it. That one thing. So here we come with a bunch of flags, planted at CPAC today before Trump’s speech.

The Russian flags that say “Trump” on them. People are excited Trump’s coming. They’re waving them around. And the media headlines… AOL: “Russian Flags Waved Confiscated During Trump’s CPAC Remarks.” WCVB Boston: “Russian Flags Branded with ‘Trump’ Waved, Confiscated at CPAC.” From the website called The Mic: “While Trump Delivered His Latest Speech, People in the Audience Waved Russian Flags.” From The Raw Story: “CPAC Scrambles to Control Damage After Attendees Wave Russian Flags.” From The Week: “CPAC Attendees Wave Russian…”

Now, the media knows. You’ve got to admire the trick. (chuckles) Creamer gets in there somehow and he gets these flags planted and these eager beaver CPACers wave them because the flags say Trump. OK. Kudos to you, Creamer. Good trick. But the problem here is the media knows this is all BS, and they’re treating this as though it is literally true, that Trump supporters are pro-Russia, that Trump supporters are gratified for Russia and they’re very happy that Russia helped Trump win the election. And if they don’t get a handle on this…

I’m telling you: Trump people, the Republicans, if they don’t get a handle on this and shut this down… I can only scream this so many times — and, frankly, I’m getting tired of screaming it, because it’s so damned obvious! It has got to be nuked. It’s got to be exposed, and everybody in the media that’s behind this thing has got to be exposed as knowing full-fledged that they are reporting and carrying a series of lies. As Trump said in his speech: They’re making up sources and they’re “unnamed.” And both New York Times stories and the Wall Street Journal story on this have the famous cadre of unnamed sources.