Why Is There No Conservative Protest Movement?

RUSH: Fresno, California. Hey, Ben. It’s great to have you here. How are you?

CALLER: God bless you, Rush. From the communist state of California, as heterosexually as I can say it, “I love you.” I really appreciate everything you do. I’m a young guy out here. But before I get to my question, I’ve been trying to call in since before Thanksgiving, since you started giving away iPhones, and I wanted to be the first guy to decline your offer and request a counter-offer if I make the host look good enough.

RUSH: Ha! (chuckling) Well, okay. Look, first thing, I’m a big believer — and I know it’s a shrinking group of people. But I’m a big believer in heterosexual love. Number two, I’m out of iPhones, I think. So even if you were thinking of asking for one, I might not be able to fulfill a request.

CALLER: No, I would actually like to decline the offer. But you’d have to offer it in order for me to do that. But, again, I’d have to make you look good enough in order to do that.

RUSH: Well, let’s see what happens. Go for it.

CALLER: So I’m a young, thirties guy. When the Tea Party started up here with Obama in California, I started fighting the communist state that we live in. Still fighting today. And I look at the direction we’re going, and I’m so fed up — and so are millions of people across this country — with the pathetic nature of most of the Republicans not willing to stand up and say what needs to be said. And the people with the funds to back it are not willing to stand up because afraid they’re going to lose their positions.

I’m wondering where the George Soroses of the conservative party are and the people willing to put their money where their mouth is and back it, and I also wonder — I wanted to get your take on this. I have an idea about what we need to do as far as fighting the fight. I believe in direct assault against these protesters. I go out about every week and confront them directly, but I wanted to get your take on that.

And I’ve got some ideas on that but I’d love to get your take. How do we…? I know you’re saying we’ve seen this before in the sixties, but if you look at the impact of the sixties — the impacts that it caused — we’ve been dealing with the destruction since then. So I look at that and I say, “Well, should we sit back and watch and wait for these guys to fizzle out, or do we do direct assault and go after these guys where they are?” Anyway, I’d love to get your take on that, and then I have a proposition.

RUSH: Okay. You’ve given me 30 seconds here to respond to this based on this segment. So the first thing that we would have to determine here — and I’ll hold you over for the break here. But the first thing — not to determine but define and explain — is why does the left engage in all of this, we’ll call it protesting and rioting, and the right doesn’t? And there are reasons for that. Hang on.

RUSH: Back to Ben in Fresno: Why does the left protest and the right doesn’t? The left is a hate group, Ben.

RUSH: Their propulsion is hate, and they have to have an outlet for the hate. They hate so much. They hate many elements of America. They hate people that don’t think the way they do. It’s not just that they disagree, they hate, and this energy requires action. People on the right, they don’t hate anybody. We want everybody to get along, when you get right down to it. We’re Rodney King types, actually. And the right seeks political victory at the ballot box — and that’s just the way it’s been. It’s a bit cliched to say but the right, conservatives, work. They have jobs. 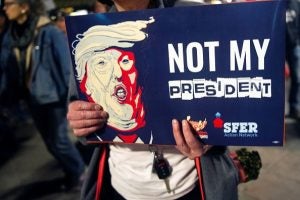 They don’t have time off to go join protest marches as a career. The left has turned that into a bought-and-paid-for, rent-a-mob type activity. Now, “Where are the George Soroses?” There’s all kinds of conservative donors. The Koch brothers are big donors. There’s all kinds of them. But none of them have actively organized hate groups that run around and protest and try to upset people and get in as close as they can to their lives and the way they live them and make a nuisance of themselves. That’s not how the right has always sought to win elections.

The left, if you get them honest, will admit they know they’re a minority.

They can’t win elections — as this last one demonstrated and many others — without lying and without camouflage and without masks hiding who they really are. So to get their way, they have to bully. They use their hate, bullying people into not opposing them out of fear or what have you. It’s two distinct cultures, two distinct behavioral norms. But I think what’s going to happen is that people like you, young people, are not going to put up with this. I think your age group of conservatism is going to become invested in protest and countering these people, and I would encourage you to do it. I think it’s called for. I think it’s about time. I say, “Get right in their faces and, ‘Screw you!'”

CALLER: And I think doing it… You’re exactly right. They’re coming from the side of hate. I think our purpose has to come from the side of love and truth and knowledge and do it in a way… That’s my objective where we don’t come out there and say… We may say, “Screw you,” from time to time. But I think in general, you show, the contrast with the truth that the right has versus the lies and the hate. I mean, they call us the bigots. They call us the racists.

RUSH: Well, that’s true. They don’t get what they want without the government forcing people to do it is the bottom line.

RUSH: And they were provoked. And at any Trump rally, you could identify the malcontents and the bad actors. They were the leftists, trying to make themselves look like Trump supporters. But the real Trump supporter is exactly somebody you described: Somebody who is peaceful, who wants the country to get better, who wants things fixed. They’re not lawbreakers. They operate within the bounds of law and order. They respect other people. They don’t make a mess. They don’t leave a bunch of trash and garbage around like leftist protesters do virtually everywhere they go. So that’s already on display. You said, “We need to show them we’re filled with love and respect.” We do, each and every day. 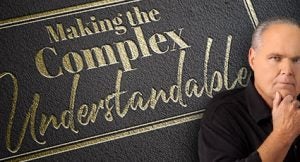 RUSH: At these Republican town halls, that’s on display too. At a congressional hearing or confirmation hearing, Code Pink is at every damn one of them making total fools of themselves.

CALLER: I just don’t know if we articulate it as well as we could in front of the media.

CALLER: I think you’re right; if you were to objectively look at each example like you’re talking about —

CALLER: — sure, if you’re thinking. But to actually have it communicated.

RUSH: The media is not going to change.

RUSH: The media is not going to say, “The malcontents at this town hall meeting were a bunch of artificial leftists bussed in from out of town.”

RUSH: For example, Tom Cotton, senator from Arkansas, did a town hall in a town of 2,000 people. Do you realize that 1,000 protesters showed up? There are not 1,000 opponents to Tom Cotton in the town in Arkansas where he showed up. In fact, the Democrat Party almost doesn’t exist in Arkansas anymore. Yet, they managed to have a thousand people show up.

Tom in Kings Mountain, North Carolina. Great to have you on the program, hi.

CALLER: Hello, Rush. Good to talk to you.

RUSH: Good to have you here, sir. Hello.

CALLER: I wanted to try to address these town hall meetings that are being lambasted by intruders. It’s a shame that our congressmen and senators are sort of doing a disservice to their constituents. Those meetings are for their constituents only. If they’re not a constituent, they shouldn’t be there. Looks to me like they could at least police the crowd a little bit. It really looks bad on TV.

CALLER: What are your thoughts?

RUSH: I hear ya. Some people’s idea was to cancel the town halls, which is a tantamount admission that they’re going to be overrun. (sigh) You know, I don’t know how to deal with this other than to have an equal number of conservatives show up and activists at these town halls that are supportive of the congressmen and shout these people down.

CALLER: Well, I really wouldn’t care what their beliefs were as long as they were indeed bona fide constituents of the individual that’s giving the town hall. You know, there’s nothing wrong with listening to both sides. But to have people sent there and planted just to disrupt and just cause an unbearable situation for our town hall… We need town halls, and we’d like to go to a town hall, but I’m not going to go to a town hall meeting that’s going to be overrun.

RUSH: The argument for not doing the town hall right now is this: The left doesn’t care about the town hall. All the left wants is the opportunity to create those pictures that you’re talking about, so that then the media can report that it is constituents showing up opposing their own Republican because he wants to repeal Obamacare. That’s, again, fake news. That’s media malpractice. The media is in on this. That’s what happens. The purpose of showing up is to create a media story and narrative that it is constituents there who oppose the Republican congressman because he’s taking away their Obamacare.

This whole thing is deeply organized. It’s not organic. It isn’t spontaneous in any way, shape, manner or form. I don’t know how you keep non-constituents out. I mean, in “the land of the free and the home of the brave.” I mean, you could try it. These people are still going to mob these places anyway, and there will be pictures of keeping them out, and then you’re going to see those. Then you’re going to get mad that somebody’s not doing a good enough job keeping them out.

So the first thing you want: Constituents only. Okay, they make the rule. Here come the non-constituents mobbing in. A mob scene ensues of them not being allowed in. The pictures say, “Constituents not allowed in!” Ultimately, what I’m telling you, Tom, is your argument is always going to come down to the way the media is reporting it. I mean, what irritates you about this is the way that the media is reporting this stuff. It’s the same old thing.