Douglas Brinkley Lives in a Bubble

RUSH: I need to get a sound bite out of the way. I had it yesterday. It was from CNN Friday night. I didn’t get to it yesterday. It’s our old buddy the official presidential historian of the Drive-By Media, Douglas Brinkley. He was on Don Lemon’s show on CNN Friday night, talking about Trump and the media. And the question to the official historian, presidential historian of the Drive-By Media, Douglas Brinkley, from Lemon was, “Blocking and attacking the media! Why do you think [Official Historian] that this is happening?” 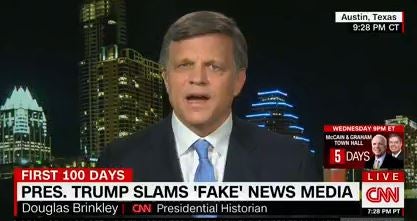 BRINKLEY: It’s something that’s, ummm, unifying, you know, the Trump coalition. For a long time, if you listen to right-wing talk radio — I mean, Rush Limbaugh and the rest — they’ve just been hammering on the mainstream media. Donald Trump tracked with it in 2016 to a degree, and he’s decided to carry it over into his presidency. And it’s all important for Trump to be able to paint CNN and New York Times, LA Times, Politico, Associated Press, and others as being kind of tools of the Democratic Party or tools of the left, and create a new divide in America. We have the red-blue divide, but create a Big Media divide: Conservative media versus liberal media.

RUSH: Where has this guy been the last 30 years? He’s the official presidential historian and he thinks that just happened? He thinks there’s all of a sudden a conservative media led by me, recently, that Trump glommed onto and is “tracking” and is using to win elections and build support and divide the nation? Mr. Brinkley, this began in 1988 (chuckles), and it’s been a successful effort here at the so-called conservative media since then, and it has spawned and sprouted many additional outlets. He thinks this just began!

And then this idea that the New York Times, CNN and LA Times and Politico, the Associated Press, why they’re not tools of the Democrat Party! They’re not tools of the left. This is just something this new conservative media concocted and Trump here has glommed onto it, and he has decided to track with it and run with it as far as it’ll take him. And this is the official presidential historian for the Drive-By Media, Douglas Brinkley. You think these people live in a bubble? Do you think they live in a cocoon, or what?