RYAN: And you have a job that’s paying you 10, 12, 15 bucks an hour, and that job does not give you health insurance. There’s nothing that the tax code does to help you buy health insurance. If you do have health care from your job you have an open-ended tax benefit. So what we’re saying is that’s really kind of not fair to the man or woman who’s working at a job that doesn’t get health insurance offered to them —

RUSH: This is a health care presentation happening right now by Paul Ryan, Speaker of the House.

RYAN: — tax benefit to go buy health insurance if they don’t get it from their job. And giving a person a monthly portable tax credit gives them the ability upfront to —

RUSH: By the way, it has charts and graphs too. I forgot to mention.

RUSH: Wait, McConnell said no tax cuts this year, did you hear that? Got it right here.

RYAN: — so that you can buy whatever you want to buy where you live. That’s called patient’s choice. That is called a patient-centered system and that is one of the biggest tools we believe can be used to replace Obamacare. This is part of replacing Obamacare —

RYAN: — with a system that works to give everybody universal access to affordable coverage.

RUSH: That’s where you would choose your health care, folks.

RYAN: Here is where we stand.

RYAN: The current system is riddled with endless regulations that are driving up costs and limiting choices for consumers, and you see how the collapse is occurring.

RYAN: The patient is the nucleus of the health care system. We don’t want insurance companies becoming monopolies looking for favoritism in a cronyistic way in Washington. We want health insurers, hospitals, doctors, all providers of health care benefits competing against each other for our business as consumers. That is how the great American free enterprise system works in all other aspects of —

RUSH: Well, that’s what it is. That’s, you know, hunky-dory.

RYAN: — in this system as well. So the result, you choose the plan that meets your needs, you buy what you want to buy, not what the government tells you to buy. So our goal here is final as this: Lower cost.

RYAN: There are two points I would make —

RYAN: We as Republicans —

RYAN: — have been waiting seven years to do this.

RUSH: Well, then who’s gonna pay for people who can’t?

RYAN: We as Republicans who fought the creation of this law and accurately predicted that it would not work ran for office in 2010, in 2012, in 2014, and in 2016 on a promise that we would, if given the ability, we would repeal and replace this law. How many people —
RUSH: Okay. I just wanted you to hear a little bit of it. Do not interpret any meaning when I choose to end this or cover this or stop joining it in progress, ’cause I have no editorial comment here at all. He’s been doing this for the last I think 20 minutes, and you should have seen the CNN headline, or the graphic at the bottom of the screen: “Speaker Ryan attempts to explain Republican health care plan.” Did you ever see, when Obama’s out there extolling the virtues on anything, did you ever see a headline: “Obama attempts to explain Obamacare?” You never saw that. 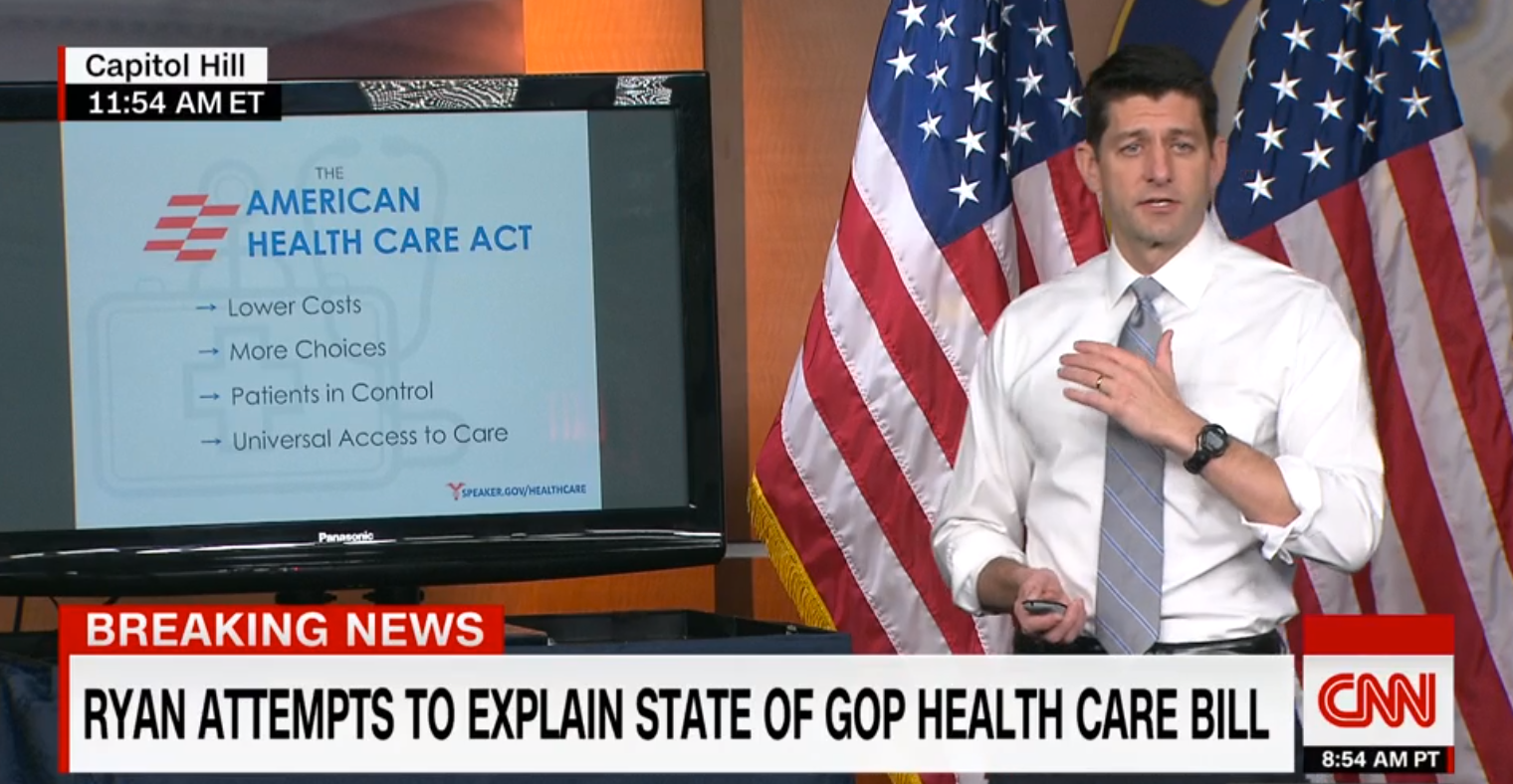 Now they’ve switched it up and their headline: “Speaker Ryan defends GOP’s health care bill.” He’s actually done a very good job of explaining this from the elements of it that I saw, but just the fact that it’s taken a lot of time and charts and graphs to explain it means that it does have its elements that are very complicated here.

President Trump has thrown down the gauntlet. Have you heard about this? Trump is telling conservatives — there’s a bunch of conservative groups that do not like this. The Club for Growth is one. The Heritage Foundation, Heritage Action is another. And Trump is telling them (paraphrasing), “If you don’t get on board I’m gonna book football stadiums in 2018 where you’re up for reelection, I’m gonna go in and I’m gonna draw 50, 60,000 to vote against you.” (laughing) He says he’s gonna book football stadiums against conservatives and Republicans. He’s saying, “Look, this is Phase 1. We can’t do it all in one bite. Hang in with me here. I told everybody we’re gonna fix it. We’re gonna fix it.”

So what it boils down to, folks, and I know you’ve heard this before and you’re tired of hearing it. Apparently the reason why this cannot be totally repealed and then fixed is because the Republicans do not have 60 seats in the Senate. Well, now, you might get mad at that. It’s an excuse that they have used ever since 2010 to one degree or another. It started out, “Well, yeah, you gave us the House, but we don’t have the Senate. We need the Senate.”

So in 2012 we get the Senate. And then they said, “Well, yeah, okay, we got the Senate, but we don’t have 60 votes, and we don’t have the White House.” So now we’ve got the White House, we got the House, we got the Senate, but we still don’t have 60 votes. There are elements of health care reform that cannot occur inside budget reconciliation. With budget reconciliation you don’t need 60 votes by rule. Senate rules are written as they are. And for most other things, 60 votes are required. They’re never gonna get eight Democrats to abandon the party and abandon Obamacare and join the Republicans. So they have to do this, they’re saying, in incremental ways that may take a Phase 2 and a Phase 3.

In the meantime, the opponents of this bill are all coming out with their own alternative suggestions. And some of them are interesting. Some of them make lot of sense. Most of them on the conservative side really focus on the free market. It’s really not complicated, the free market. If you understand markets and how they work, markets with as little government involvement as possible and as little regulation as possible, markets are simple compared to this. Economics isn’t simple. But it’s logical once you know everything involved.

What makes economics illogical and what makes economics complicated is when government and government regulators get involved and start carving out exceptions for this group of people, that group of people, that circumstance, then you end up with a menagerie and a maze that nobody could find their way through if they had to, if their lives depended on it, and that has been happening to health care since the 1960s. It has been bollixed, it’s been complicated, it has been gummed up, it has been made confusing purposefully. And trying to unwind all of that and just take it to the free market, nobody apparently has the confidence.

Ryan even addressed this. He said it would be simple, the simplest thing in the world would be for us to let Obamacare implode, which it is, and he explained it with charts and graphs how it’s imploding. He even defined a death spiral. You know, the Aetna insurance CEO claimed a couple weeks ago that Obamacare’s in a death spiral. And Ryan didn’t assume everybody knows what that means. He actually defined death spiral as it relates to health care.

And it’s all about the fact that the elderly and the sickest are the ones that need the services, but the young and the healthy who don’t need services ’cause they’re healthy, are not buying. And the elderly and the sick don’t have the money to buy. Therefore, there are all kinds of financial shortfalls. And it’s just in a death spiral.

We’re getting to the point here where there isn’t gonna be any money left. He said it would be easy to just let this go. It’d be easy to just let it collapse and disintegrate and start over, but that would be a disservice the American people, the American people wouldn’t put up with it. We gave the American people Obamacare. It’s our responsibility to fix it. And his presentation today is designed to explain how their fix is largely conservative. He spent a lot of time explaining that — you know, one of my big bugaboos, in fact, he addressed, and that is that there is no consumer element in this. 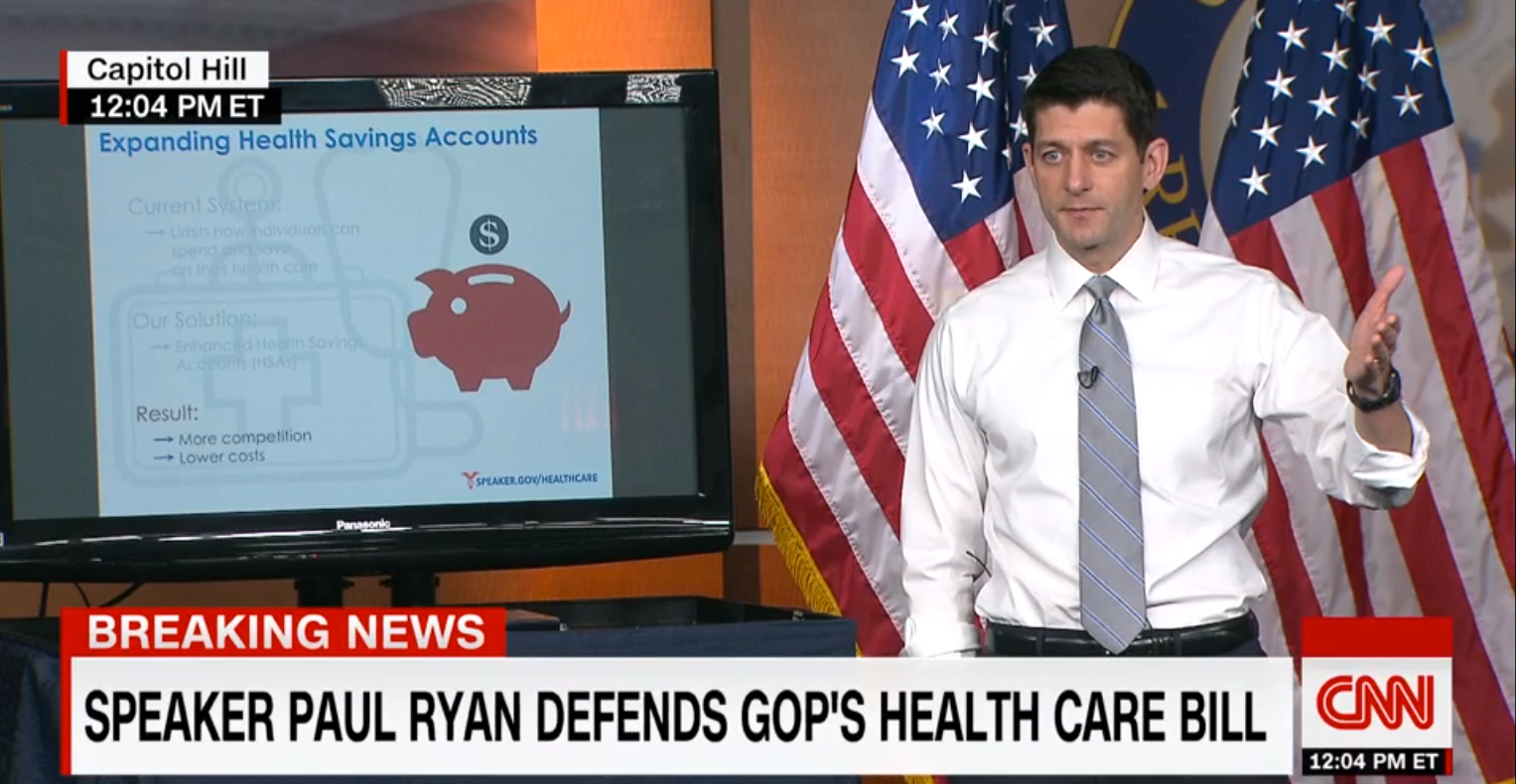 And by that what he meant was there’s no market aspect of this where health care services are based on people’s ability to pay, based on economic market forces. None of that is in there, and therefore people choosing health care services, it doesn’t matter ’cause they can’t afford any of them without it being subsidized or paid for with tax credits or some such thing.

He said it can’t survive that way, so he made the point that we’re doing everything we can to reintroduce — and he had a graphic, a red pig piggy bank to illustrate what a health savings account is. By the way, I looked at that, and I said is that what we have to do in America today to explain what a health savings account is, to have a graphic of a piggy bank? I guess we do.

RUSH: Donald Trump, the president, just moments ago tweeted the following: “Despite what you hear in the press, health care’s coming along great. We’re talking to many the groups. It’ll end in a beautiful picture.” So the president is full bore behind the Paul Ryan House Republican version of repeal and replace and is doing everything he can to sell it and I assume improve it, but he is all in, apparently. 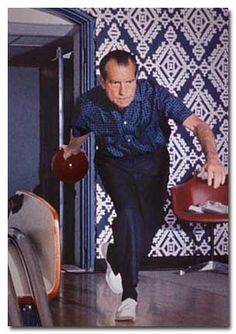 Big whoop! You gotta go to the White House to use the bowling alley! And by the way, one thing I was wrong on. It hasn’t happened; it’s gonna happen. It’s an invitation in the future to come bowl and do legislation at the same time.