Have You Seen the Economic News Out There? The Republicans Better Not Screw This Up

RUSH: Have you seen the latest economic news? There’s all kinds of it out there. For example, Ford Motor has announced that they’re gonna expand three plants in the United States. They’re gonna spend $850 million in one plant to add the Ranger And Bronco SUVs to their line. Do you know what the most purchased vehicle in the country is? (interruption) How did you know that? How did you guys know that? Have you been peeking at my show prep this morning? 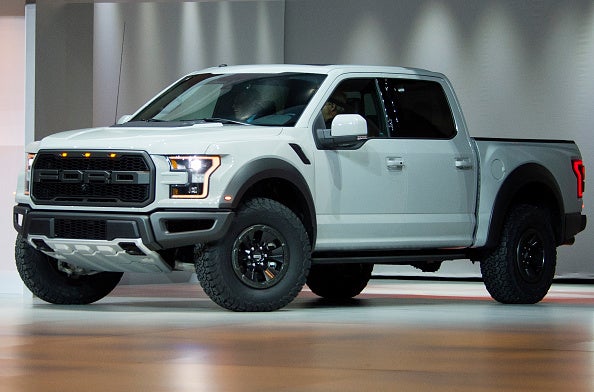 The Ford F-150 pickup truck is the number-one selling vehicle. How many do you think are in New York City owned by Democrats? How many of them are driving around Washington, D.C., or Boston, owned by Democrats? Do you think Chuck Schumer would be able to recognize a Ford F-150 if he saw one on Fifth Avenue in Manhattan? Would Chuck Schumer and his constituents get in the Ford F-150 to go to Tiffany on Fifth Avenue for a shopping spree?

The people that drive the Ford F-150 are the exact people the Democrat Party have kissed off: white working class and even some African-Americans buy a Ford F-150. But working-class people, the Ford F-150, the largest selling truck in America, and there’s not a Democrat that’d be caught dead in one. There aren’t very many Democrat elitists who would even recognize one. But if they saw somebody, say, from Valdosta, Georgia, in one they would start cracking jokes about, “Hey, look at that. Why, there’s Deliverance on wheels. I’ll betcha there’s a gun rack in the back of that Ford F-150.”

You get my point here. Why are you frowning at me in there? ‘Cause you’ve never looked at it this way, have you? The Ford F-150 is the most purchased vehicle in America, and there’s not a single Democrat elitist who’d be caught dead in one and many of them wouldn’t even know what one is if they saw it, if it drove right by ’em.

There’s so much in this statistic. I mean, it illustrates how the Democrats are out of touch with the people they think are their constituency. It illustrates how out of touch they are with anything outside of Washington or New York. And it’s these kinds of vehicles that they want to get off the road with climate change rules and regulations using the EPA.

It’s these kind of things that the Democrats are happy if they are manufactured overseas, happy to get ’em out of America. They’re an embarrassment. Pickup trucks? No, no, no. We like mass transit. We like trains. We really love trains. We like light rail. We like late rail. We like anything the Europeans do. We like skinny pencil neck people who couldn’t blow over a grain of sand if their lives depended on it, those are the smart people, those are the people we rely on. We don’t want people that drive around in pickup trucks because you know what’s in pickup trucks? Dirt and excrement and stuff from the farm and they tow stuff and they get dirty and they get muddy, and we don’t want any of that in our lives.

And so they’re not surrounded by it. And now Ford has announced the expansion of three different plants in the U.S. This is all happening because of Donald Trump. And Donald Trump’s voters love it and they support it and they don’t care about Devin Nunes other than they don’t want him going anywhere.

The Trump voter doesn’t think that Devin Nunes has done anything wrong. The Trump voter fully recognizes what is happening to Devin Nunes and what’s happening to anybody that the Democrats target, and they are all about defending them and defending Trump. The Democrats know all of this. The elected Democrats in Washington, they know all this. I have a story here in the Stack, how the Democrats are still doing postmortems after the election, and they finally have gotten down to what went wrong with their polling. Why did their polling so mislead them? 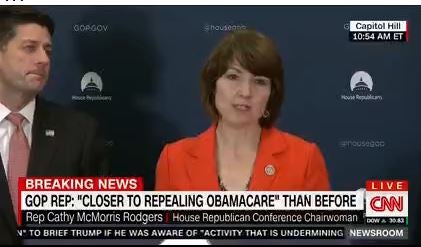 By the way, not only is Ford expanding manufacturing facilities, but because of this announcement and the fact that the GOP had a meeting today about health care and the GOP leadership came out, he had Ryan and Cathy McMorris Rodgers and a couple others. They came out there and they said, “We went back, we had a big meeting today. We want to unify our caucus. We don’t know when, but we’re gonna go back and attack this, health care reform and repeal is not dead. We can’t stand by, let this implode.”

So they clearly stated that it’s not dead, don’t believe what the media says; we’re gonna try to come back to this sooner than you think. The stock market had a quick response: went up 60 points based on that press conference alone. It was already up because of the Ford announcement. The details from the Republican presser, they’re all saying they’re getting rid of Obamacare still on the agenda, some in the camp that was voting “no” are willing to work with everybody to get it right.

They’re gonna figure out, they’re gonna try to find out how to get it done. They have to deal with Senate rules, which is always a roadblock. It means they can’t just pass a straight up and down, do everything under reconciliation because not all of it was passed — you know the drill on this, the Senate rules they have to account for it in crafting legislation. Mo Brooks, who was a member of the — Brooks is Freedom Caucus, right? He came out and he said (paraphrasing), “You know what? It’s a one-sentence bill. Let’s just repeal the sucker. Let’s repeal and replace the sucker and any regulations that were written at the time or have been added, vote right now, just repeal it.” He wants the bill brought out, gets a discharge petition, so it can be voted on.

These are good signs. These are good indications that people in the House get what’s going on. They say they’re moving on to an aggressive agenda. Still working on repealing and replacing Obamacare. They say they want a unified majority. They’re gonna talk more with each other to do that. You can believe it or not, you can pooh-pooh it, you can say, “Yeah, what else are they gonna say?” I understand. But this press conference, you could see the stock market react to it as well as having reacted to the Ford announcement.

Consumer confidence has soared this month to its best reading in 16 years. “Consumer confidence in March soared to the highest level in more than 16 years, according to data released Tuesday.” This is from the Conference Board. They’ve kept this index for many, many moons. Here are the numbers, although they don’t mean anything by themselves.

The consumer confidence index now at 125.6. It was 116.1 in February. That’s coming in well ahead of the MarketWatch-compiled consensus of 114.1. Here’s the news. The consumer confidence, all these numbers have taken off since Trump’s election, and they took off again after Trump’s inauguration. And this is based, if you get into the internals, of why people are saying they are more confident in the economy, the prospect of lower taxes and more infrastructure spending. Did you see how much money was collected in property taxes — I forget year — $560 billion was collected. That’s state and local money. That’s half a trillion dollars.

There is no way the people of this country are undertaxed. There is no way tax reform cannot and should not happen. The Conference Board’s new consumer confidence index is way up because Trump voters and even more than Trump voters believe tax reform’s gonna happen, so it had better, and they’re also happy about the infrastructure spending. “But, Rush, but, Rush, but, Rush, that’s Big Gov.” No, I tried to explain this to you, folks. I don’t mean to sound uppity here, but as a rock-ribbed conservative, let me just put it this way. As a rock-ribbed conservative I understand completely why.

Even conservatives are in favor of Trump’s version of infrastructure spending. People are intrigued by the concept of public-private money partnership, number one. They’re also intrigued by the fact that it might actually happen. A Democrat stimulus bill to rebuild roads and bridges just goes unions and Planned Parenthood and other Democrat constituencies, just like business fines go to left-wing activist groups. People that voted for Trump believe, if he appoints money, appropriates money for actual infrastructure repair, that that’s what’s going to happen.

And they think it’s needed. They think roads and bridges are in disrepair in too many places — ditto, airports. They’re all happy for that expenditure of federal money, because it constitutes jobs, improvements, modernization, and any number of good things. You know, there are people that believe that some government expenditures are worthwhile, particularly those that only government can do.

The people that voted for Trump have not abandoned him.