Hillary Comes Out in San Francisco

RUSH: Hillary Clinton has even come out of the cave. She went out to San Francisco. She’s made a public appearance. You see she was wearing a leather jacket out there, a black leather jacket? What a hot mama. (laughing) Not. In San Francisco, of all places. Actually, my friends, it makes total sense that Hillary Clinton comes out, ahem, in San Francisco. And by come out, I mean reemerge from the cave in which she’s been hiding in Chappaqua. Probably making sure she’s not there when the Energizer is and then returning back home when the Energizer departs. 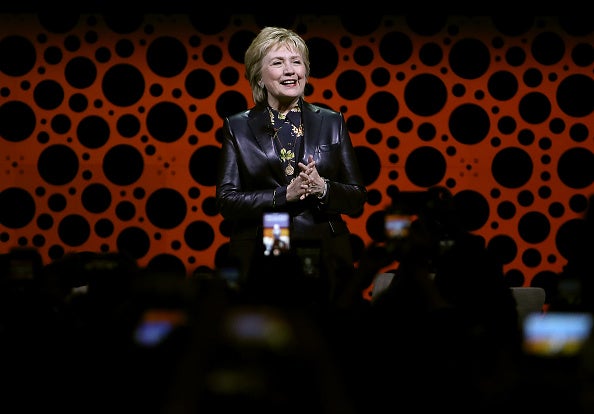 So she’s out there, and if there’s ever a woman who put people at risk, it’s Hillary Clinton. Can we talk about Benghazi? Can we talk about this flaky, stupid, dangerous Russian reset? I mean, it wasn’t that long ago the Democrats loved the Russians, were colluding with the Russians and presenting them a new plastic red button symbolizing a reset with Russia after Bush had been such an enemy of the Russians. Hillary wanted to show that we were buddy-buddy again and we’d had no problems with the Russians.

Now, isn’t it amazing how the Democrats all of a sudden hate the Russians once again? One of the things that she surfaced to say was that Trump’s order to undo Obama climate plans puts American lives at risk. And she said these are more than statistics; they’re American lives at risk because this administration willfully ignores the science. That’s another thing. There isn’t any science. When you have to rely on tiny little liberal actors dressed up in lab coats and bow ties like Bill Nye, what a fraud. What a genuine, legitimate fraud. He’s not a science guy. But he’s one on TV and so that’s all that counts, and he’s out there spewing this stuff. 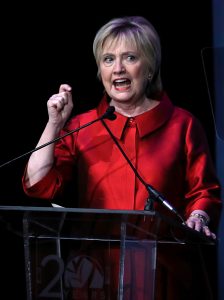 WASHINGTON, DC – MARCH 08: Former U.S. Secretary of State Hillary Clinton speaks during the Vital Voices Global Leadership Awards at the The John F. Kennedy Center for the Performing Arts on March 8, 2017 in Washington, DC. Former Secretary of State Hillary Clinton addressed the 16th annual Global Leadership Awards on International Women’s Day. (Photo by Justin Sullivan/Getty Images)[/caption]But I’ll tell you, if anybody put American lives at risk, it’s Hillary Clinton, not Donald Trump. She’s an expert at it. If Ambassador Stevens was still alive, he could more fully explain. Look what she did to Libya. Look at the number of people that died in Libya. She was the brains behind a military operation that turned an entire country into a hellhole run by terrorist organizations. And you know who else the Democrats have put at risk, and that’s the mental health of these college students today. Look at what they’ve done to them! Starting with day care.

It’s the rollback of the Democrat Party agenda that has them in hysterics, not the planet being at risk, not human lives being at risk.