Caller to GOP: Let’s Pack the Court While We Have the Chance

RUSH: Barbara in Rochester, New York. Great to have you on the program. How are you doing?

RUSH: Oh, you’re welcome. It’s great to have you here. What’s on your mind? What did you call to talk about?

CALLER: Well, after Gorsuch is approved, I think Congress should change the number of Supreme Court justices from nine to 11, and then they can get a few more conservatives on the court that will follow the rules of the law.

RUSH: Well, she’s got a point here, folks. Congress can determine the number of people on the court any time they want to embark on changing the rule. Congress sets up the courts. Congress determines the districts — the circuits, if you will — and where they are and the number. You know, the Supreme Court has not always had nine justices. It’s had a varying number over the years. If they tried something like that, do you expect the Democrats would go along with that?

CALLER: Democrats have no choice.

CALLER: They aren’t the majority now.

RUSH: (laughing) Tell them that.

RUSH: Tell some Republican voters that. They don’t see it manifesting that way. (chuckling)

RUSH: They still see the Democrats running the show. Nunes gone. Sessions recusing himself. Bannon in or out, depending on who you believe. Trump starting to listen to the liberal Democrats of Goldman Sachs in his administration. The media is on a full-court press here to try to convince you that the liberal Democrats are taking over the Trump administration; the Republicans, gutless cowards, are recusing themselves everywhere. 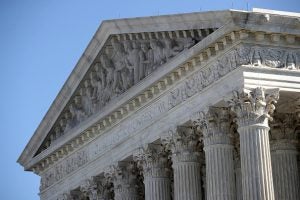 RUSH: Don’t be stymied. You can react.

CALLER: Oh. (chuckles) Well, I’m just looking at all these dynamics going on, and the bottom line is, they have to focus. I don’t care what party you belong to, what religion you are, what color you are. Focus on the American people. That’s all we ask.

RUSH: Well, I get your thinking, and I think your thinking echoes the sentiments of countless millions out there. That is, all we’ve really done here is win an election, and now it’s time to use it. So let’s expand the Supreme Court to 11 while we confirm and appoint the nominees and let’s get a genuine conservative majority in there regardless what happens to Stephen Breyer or Kennedy or Ruth “Buzzi” Ginsburg. It’s like anything else, though. When you do that, the Democrats are gonna end up back in power at some point and those seats are gonna become open. But I still get your thinking. Let’s do… If the Supreme Court’s gonna have the power that it has, let’s put as many of our people on it as we can. Barbara, let me ask you this before you go. You still there?

RUSH: Imagine for a moment that several members of the House Judiciary Committee are actually listening right now and have heard your call. What do you think their reaction is?

CALLER: I’m not sure. I do write the president every now and then, and I have made that suggestion. So I’m hoping somebody’s listening to me.

RUSH: Well, it’s a great thought, and I appreciate it. We’ll see. (chuckles) I’m not comfortable yet characterizing what I think the House members hearing your suggestion’s reaction would be. So we’ll wait to see if it ever happens.