Why the Fascination with What They Say on MSNBC?

RUSH: It’s Ken in Columbus, Ohio. Great to have you on the EIB Network. How are you doing?

CALLER: Great. I appreciate you taking my call.

CALLER: I’m a listener and very appreciative of how you keep us all informed.

RUSH: Thank you, sir, very much. It doesn’t matter what it is, you are informed if I talk about it here.

CALLER: I just wanted to make a quick comment. I usually get up early in the morning and watch a little bit of PMSNBC, but usually I have to turn ’em off in about five minutes because it’s, you know, just so one-sided. But today they were extremely appreciative of Trump, you know. They were… Even Mika wasn’t rolling her eyes. But I just wanted to get your opinion on Scarborough being a Republican and what he did down in Florida. But he had, you know, David Ignatius and had —

RUSH: What do you mean —

CALLER: — Bob Woodward on there.

CALLER: As a congressman, you know?

CALLER: When he was down there at that time, but today he was just — you know, they were just — gushing with praise for what, you know, (unintelligible).

RUSH: You know, there are many things in the media landscape, many things, and I understand almost all of them. But there are a few that I don’t get (chuckling), and this is one of them. (chuckling) I don’t get the interest. I don’t get the curiosity. I don’t. Your specific question is that you watched Morning Joe today, and they all of a sudden loved Trump again because this attack on Syria?

CALLER: Right. Usually, I watch about five minutes and I go switch back to Fox. 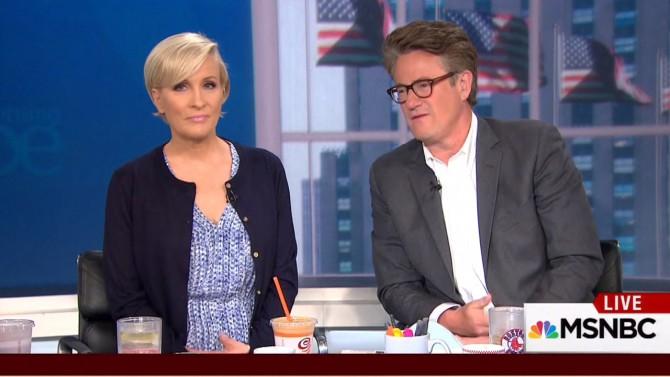 CALLER: But then, you know, the other day, for example, Mika was on there. She spent half hour going through all the polls. You know, Trump couldn’t get elected as a dogcatcher anywhere in the United States according to her.

RUSH: You know, my question is: Since this stuff obviously pains you, why do you watch it?

CALLER: Well, I just like to get a little opinion. I’m kind of hoping maybe that they’ll get somebody on there that does speak a little more positive about the presidency and stuff.

RUSH: I see. Okay. Human nature is a fascinating thing. I mean, you’re not the only one. There are people that watch what they don’t like all the time hoping it’ll change or maybe they just keep… They need to be mad. So they watch stuff that makes them mad, knowing it’s gonna make them mad. (sigh) You know, I’m gonna take the opportunity here to say I gotta go to break. This is one of those things, there’s no winning for me no matter what I tell you on this. (laughing) There’s just… There isn’t. There’s no winning. I’m not… (interrupting) He what? He asked me…? (interruption) I didn’t hear him say Scarborough. He said Mika! Mika this, Mika that, Mika this. I didn’t hear him ask me about Scarborough. I didn’t hear him mention Scarborough’s name. You can’t fool me!